CJPME Factsheet 111, published February, 2011: This factsheet analyses the recent emergence of large protests in Jordan, an unusual and extraordinary event in modern Jordanian history. Although different in tone and urgency than parallel protests taking place in Egypt and Yemen, these protests appear to emerge from common grievances. Protests in Jordan stem from deteriorating economic and social conditions, weak democracy, limited human and labour rights, and restricted press freedom. This factsheet also looks at the Jordanian government’s response to the protests.

Factsheet Series No. 111, created: February 2011, Canadians for Justice and Peace in the Middle East
View factsheet in PDF format 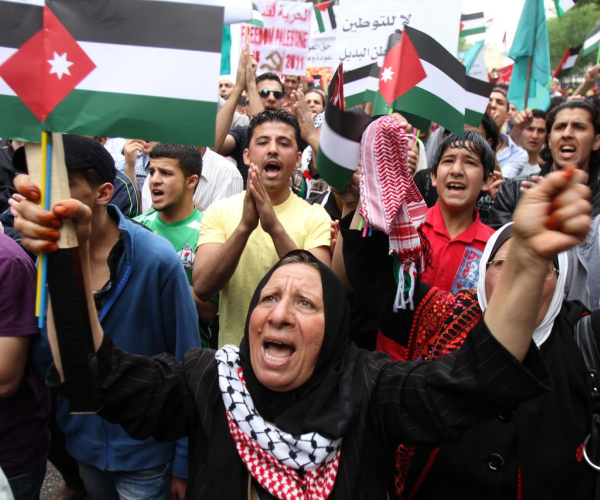 How significant are the January-February 2010 protests in Jordan?

The emergence of large protests in Jordan is quite extraordinary in modern Jordanian history, but is nonetheless quite different in tone and urgency than parallel protests in Egypt and Yemen.  On Friday Jan. 14, in response to a call by popular trade union leader Mohammad Sneid, an estimated 8,000 Jordanians protested in Amman (the capital), Maan, Karak, Salt, Irbid and other cities. Alarmed by soaring food and fuel prices, they chanted “Jordan is not only for the rich. Bread is a red line. Beware of our starvation and fury.”[i] Despite government announcements of economic relief plans, on Friday Jan. 21 about 6,400 Jordanians again protested—5,000 in Amman and about 1,400 elsewhere, mainly in the northern cities of Zarqa and Irbid. They called for “bread and freedom,” demanding that Prime Minister Samir Rifai resign, and that Parliament choose his replacement. The Muslim Brotherhood, its political arm the Islamic Action Front, and Jordan’s largest trade unions jointly organized that protest.[ii]

Friday Jan. 28, 6,000 protested—3,500 in Amman and 2,500 in six other cities. Rifai resigned and on Feb. 1 King Abdullah II re-appointed Marouf Bakhit as PM, instructing him to take “practical, swift and tangible steps to launch a real political reform process, in line with the king's vision of comprehensive reform, modernisation and development.”[iii] Feb. 3, King Abdullah met with members of the Muslim Brotherhood to discuss how to defuse tensions. The Brotherhood backed out of the protests planned for Friday Feb. 4, saying it wanted to give the new PM a chance to enact reforms. Despite its withdrawal, hundreds of other protesters again demonstrated in the capital that day.[iv]

What is motivating Jordan’s protests?

Economic and social conditions.  Food prices in Jordan (as in countries around the world[v]) have spiralled up in recent months.[vi]  Jordan’s inflation skyrocketed to 6.1 percent in December 2010. Unemployment is estimated at 12 to 30 percent around the country, and one quarter of the population lives in poverty. The minimum wage in Jordan is $211 a month. Amman—home to one third of Jordan’s population—is the Arab World’s most expensive city. According to opposition leaders, the government has in recent years imposed regressive tax schemes which have increased the tax burden on poorer people. Jordan has also implemented more free trade agreements than any other country in the Middle East, privatized state-owned companies and eliminated most fuel subsidies. The opposition blames the current problems on these government policies.[vii] [viii] [ix] [x]

Weak democracy, limited human and labour rights, and restricted press freedom.  Under Jordan’s constitution, King Abdullah II has exclusive powers to appoint prime ministers, judges and regional governors, and to dismiss Parliament and rule by decree. Protesters are demanding constitutional amendments to curb his power and ensure that the PM’s post is held by the elected leader of the parliamentary majority. However, not even the Muslim Brotherhood, the main opposition block, has called for the King—the real locus of power in the country—to depart. Nevertheless, protesters are calling for major economic and political reforms.[xi]

The King dissolved parliament in November 2009, only two years into its four-year term. During 2010 the government ruled by decree.[xii] It passed a law entrenching inequality in parliamentary representation between Jordanians of Palestinian origin—over half the population—and East Bank “indigenous” Jordanians.[xiii]

The November 2010 parliamentary elections were marred by fraud, violence, vote-buying and rules that ensured under-representation of urban voters—many of Palestinian origin—who defer less to the monarchy than rural tribal voters.[xiv] [xv] Freedom of expression and assembly and press freedom were also restricted. For example, the Zarqa governor denied permission to Radio Balad to host and broadcast a candidates’ debate entitled “Unemployment and Environment,” giving no reason for the denial. Another candidate was charged with ‘stirring up sectarian strife,’ simply because in his election manifesto he had lamented that Jordanians of Palestinian origin have a harder time finding jobs than other Jordanians, and are discriminated against in other ways.  A restrictive “cybercrime” law was passed in August, 2010.[xvi]

Trade unionists have been prosecuted and jailed for “illegal gatherings” protesting dismissals or working conditions, or heckling a government minister.[xvii] Unionized Jordanians may only strike with government permission; non-Jordanians are not allowed to strike at all. (These restrictions violate International Labour Organization (ILO) standards.)  Human Rights Watch also notes, “Torture, routine and widespread in recent years, continues, in particular at police stations, where complaints about ill-treatment increased in 2009 and again in 2010.” [xviii]

Jordanians thus have few vehicles for political change other than street protests. However, even peaceful gatherings are often deemed illegal. Permission must be obtained from provincial governors to hold any public gathering; and governors frequently deny it.  The current protests have only been possible because governors have not been enforcing the rules.[xix]

The inspiration of Tunisia’s “Jasmine Revolution” and Egypt’s pro-democracy protests.  Jordan’s protests began prior to Tunisia’s but gained momentum from the success of Tunisia’s “Jasmine Revolution.”  The parallel protests in Egypt fascinated Jordanians, and garnered much support from Jordanians.  The relative success of the Egyptian protests has led to talk in Jordan of demanding the King to be more accountable to the public.[xx]

How has the Jordanian government responded to the protests?

Despite continued Jordanian deference to the monarchy, protesters are sceptical of the King’s Feb. 1, 2011 appointment for PM, Marouf Bakhit. A pro-US military man, previously the King’s national security adviser and ambassador to Israel, Bakhit is seen as an obstacle to reform. As PM in 2005-07, Bakhit did not implement the National Agenda—a 2005 blueprint for a decade of reforms, including jobs paying at least the minimum wage. He also cracked down on independent charities. Bakhit resigned amid accusations of vote-rigging in the 2007 elections.[xxiv]

Despite its poor human rights record in recent years, the Jordanian government has so far avoided resorting to extreme violence or mass detentions to quell the 2011 protests.[xxv]