CJPME Factsheet 112, published February 2011: This factsheet provides an overview of the current protests in Egypt, a country of extreme importance demographically, geographically, and politically. The significant of these protests is that they are some of the biggest Egypt has experienced in decades. This factsheet looks at the people leading the protests, the socioeconomic and sociopolitical grievances that have triggered calls for Mubarak’s resignation, as well as what Mubarak’s departure could mean to the region, and peace in particular.

Factsheet Series No. 112, created: February 2011, Canadians for Justice and Peace in the Middle East
View factsheet in PDF format 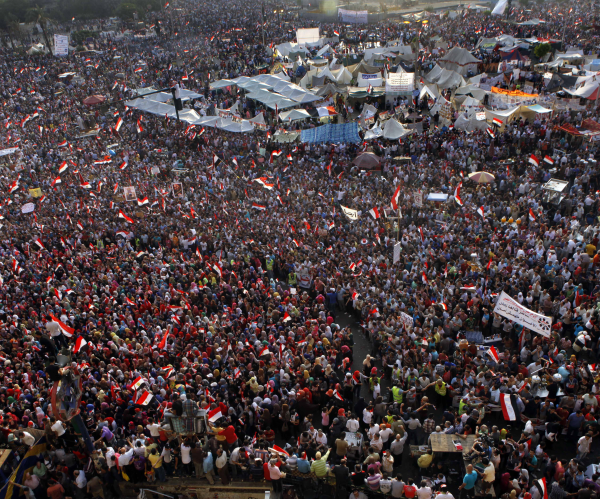 What is the significance of the current protests in Egypt?

The current protests in Egypt are internationally significant for two main reasons.  First, Egypt is extremely important demographically, geographically, and politically.  With 79 million, Egypt is the most populous country of Middle East and North Africa; protests in Egypt reverberate throughout both regions. Egypt controls the geo-politically strategic Suez Canal, borders with Israel, and has acquiesced to US policy on the Israeli-Palestinian conflict for 30 years. With its diversified and comparatively developed economy, it is a regional economic heavyweight and major trade partner.

The protests in Egypt are also significant in that they are some of the biggest in decades in Egypt.  Estimates of the current protests’ peak size range from 200,000 to 1 million or more. They are the largest since President Hosni Mubarak took power in 1981 and comparable in scale to the massive January 1977 “bread riots”,[1] when hundreds of thousands of impoverished Egyptians protested World Bank and IMF–mandated lifting of state subsidies for basic foodstuffs, and forced the government to reinstate them.

Who is leading the protests?

For many years, Mubarak has obstructed the formation of an effective legal opposition to his regime.  Because of this, the current protests have been largely spontaneous and evolved independently of any organized opposition groups.  The protest movement is thus an extremely diverse cross-section of society: Muslim and Christian, young and old, trade unionists, poor, frustrated middle-class, intellectuals.

Anti-government protests were initially sparked by young blogger Wael Ghonim’s Facebook page We are all Khaled Said, named after a young man beaten to death in public by security police in June 2010. Tech-savvy youth spread the word through that Webpage and other social media.

Why are protesters asking for Mubarak’s resignation?

Illegitimate 2010 elections. The Mubarak regime has been characterized for many years by corruption and human rights abuses.  In the 2010 elections, ballot box stuffing was rampant, election monitors were excluded from polling stations, armed men intimidated voters. The government cracked down on the media, including bloggers. Scores of political activists were arrested and harassed. Candidates with ties to the Muslim Brotherhood[2] were prevented from running as independents, as they had in 2005, when they won 20 percent of the seats. The blatant 2010 electoral fraud produced a sweep for the ruling National Democratic Party, and broad popular discontent. [3][4][5]

Oppressive “security” laws.  An emergency law enacted upon Anwar Sadat’s assassination in 1981 remained in effect through 2011.  This law gives security officials free reign to crack down on demonstrations and public meetings, and to detain people indefinitely without charge. Mubarak’s government renewed the law in 2008 and 2010 despite promising in 2005 to let it expire.[6] Human Rights Watch put the death toll in the current protests at 297, most by live fire. Only 15 of those deaths occurred in clashes between protesters and pro-Mubarak demonstrators on Feb. 2 and 3.[7]

Corruption. Transparency International gave Egypt 3.1 out of 10 in its 2010 Corruption Index (10 equals “clean”).[8] Foreign enterprises wishing to do business in Egypt are usually asked to give a free 20 per cent stake to prominent Egyptians. Reputable sources say that Mubarak and his two sons have accumulated between $15 and $30 billion dollars in family wealth during his years in power.[9]  Egyptian labor law inhibits the formation of independent unions, and requires workers to be members of the Egyptian Trade Union Federation (ETUF), which Mubarak’s regime controls. The right to strike is very restricted.[10]

Tremendous concentration of wealth. Gross national income is a mere $2,000 per family[11] and 40 percent of Egyptians live below the poverty line of US$2 a day. Under Mubarak’s sweeping privatisation policies, families close to his regime appropriated profitable public enterprises and vast areas of state-owned lands. They also acquired monopoly positions in strategic commodity markets like iron, steel, cement and wood. Private sector industries making environmentally hazardous products like ceramics, marble and fertilisers grew without effective regulation, to the detriment of public health, while Egypt’s backbone industries declined. Mubarak’s National Democratic Party has been the primary vehicle used by this new business class to consolidate and protect its wealth.[12]

What could replace Mubarak’s regime?

The Egyptian military. Egypt’s military is relatively well-liked by Egyptians; unlike the notorious security police, it seldom suppressed past popular protests. The military – miffed that Mubarak was poised to install his son Gamal, rather than a military man, as successor – initially declined to publicly suppress current protests. However, middle and upper-echelon officers enjoy tremendous economic privileges, often own large businesses, and to a degree constitute a parallel elite to the business elite. As Dr. Paul Kingston notes, Egypt’s military are not neutral, but rather “they are playing a double game, hoping to emerge on top of an amended but still authoritarian regime.” Human Rights Watch reported on Feb. 9 that Army and military police have also arrested and beaten large numbers of protesters.[13]

Vice-president Omar Suleiman. Mubarak named Suleiman, director of Egypt’s national intelligence agency since 1993, as Vice-President Jan. 29, 2011. Credible accusations of his involvement in torture have become public,[14] [15] undermining efforts to position him as a legitimate agent of reform.[16]

In the absence of formal social or political frameworks for debate, Egyptian protesters may opt to settle for an interim government led by someone internationally respected but completely independent of the Mubarak regime.  Such an individual (e.g. Amr Moussa, head of the Arab League, or Mohammad Elbaradei, former UN weapons inspector) would be tasked with the coordination of a transition process and early democratic elections, both presidential and parliamentary.

Late in the 1970s, Mubarak’s predecessor Anwar Sadat negotiated a peace with Israel which has held through 2011.  The deal enabled the peaceful return of the Sinai Peninsula from Israel (which had militarily occupied it since 1967) to Egypt.  For the Israelis, this deal neutralized its most threatening neighbour, and ruptured the united “land for peace” negotiations front maintained by Arab leaders at the time.  The deal angered other regional Arab players – e.g. Syria, the Palestinians, the Jordanians – who saw it as a betrayal of Arab regional interests.  It also angered many Egyptians, who viewed Sadat’s move as subservient to US and Israeli interests in the region.

Mubarak has maintained support for Sadat’s peace agreement with Israel.  Mubarak has also been an accommodating presence in terms of control of the Egypt-Gaza border, more or less following the US lead in terms of border policy/closure. [17]  While few in Egypt would argue for a belligerent new stance against Israel at this time, many are highly concerned about Israeli human rights violations against the Palestinians, and Egypt’s implicit participation.  A new regime, more independent of US and other pressure, will have a number of negotiating cards at its disposal, and may demand greater urgency in addressing the legitimate and long-standing grievances of the Palestinians.


[1] Conversation between CJPME and Paul Kingston, Feb. 8, 2011. Dr. Kingston points out that 5 million Egyptians poured onto the streets to lament the death of Gamal Abdel Nasser, president 1956-70, and a similar number also did so when a popular singer died.

[2] The Muslim Brotherhood is a non-violent, moderate Islamist group founded in Egypt in 1928 but outlawed by successive Egyptian governments, including Mubarak’s.

[8] The Guardian. "Corruption index 2010 from Transparency International: find out how each country compares,” Oct. 26, 2010