CJPME Factsheet 118, published May, 2011: This factsheet discusses the significant political developments taking place in Syria since the first few months of 2011. Syria has been led by the autocratic regimes for over four decades: Hafez al-Assad from 1971 until his death in 2000, and by his son Bashar al-Assad ever since. There are credible reports of armed resistance to the Assad government, which raises the question of whether President al-Assad can be expected to remain in power. In order to address this question, this factsheet looks at who are the Syrian protesters and what are their demands, how much support they have, and what are the root grievances behind the protests.

Factsheet Series No. 118, created: May 2011, Canadians for Justice and Peace in the Middle East
View factsheet in PDF format 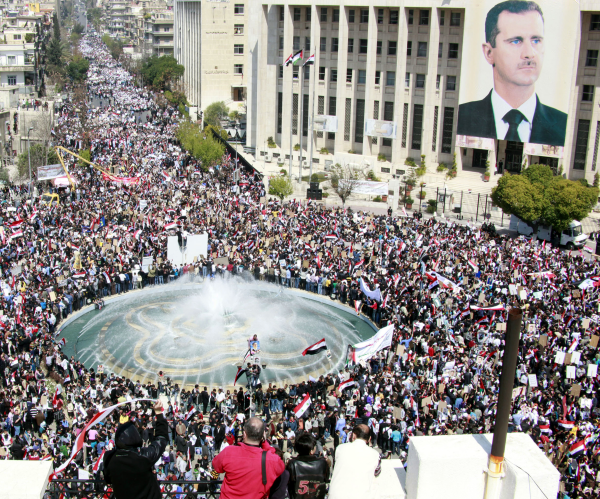 How significant is the political unrest in Syria?

The political developments taking place during the first few months of 2011 have been extremely significant for a number of reasons.  First, Syria has been led by the autocratic regime of Bashar al-Assad since 2000.  His father Hafez al-Assad led Syria under a similar autocratic regime between 1971 and his death in 2000.  Popular uprisings like those observed in March and April, 2011 have not been seen since the 1980s.  Secondly, the government’s seeming willingness to cede some ground to the protest movement in April seemed to suggest some positive political evolution might be possible in Syria.  The subsequent government crackdown in late April—which raised the death toll to 535 as of May 1, according to The Guardian—was thus an extremely disappointing development for Syria-watchers. Finally, the turmoil of 2011 is significant because there are credible reports of armed resistance to the government: something unexpected, and not yet fully understood.

Who are the Syrian protesters and what are their demands?

Most of the protesters are in their 20s or early 30s and are internet-savvy. Prior to the outbreak of demonstrations, many young people expressed to foreign media their frustration with high youth unemployment, limited career prospects and restricted freedom of expression. Some observers believe that the outlawed Muslim Brotherhood[i] has been instrumental in mobilizing protesters. They point to the fact that the administrator of the “Syrian Revolution 2011” Facebook page —which at over 130,000 members, is the most important webpage mobilizing protesters— leads the Muslim Brotherhood’s Swedish chapter.[ii] The protesters have been unarmed for the most part.  However, there have been credible reports that about 60 Syrian security agents have been killed —some even mutilated—in recent weeks. Significantly, Assad has not accused the protesters themselves of the killings. Nevertheless, the fact that armed groups have been operating against government forces raises important questions about the organization and objectives of such groups. [iii] That some units of the regime’s security apparatus do not wear uniforms further adds to the confusion.

Initially, protesters called only for political reform —especially an end to the 47-year state of emergency—and for anti-corruption measures. However, with the government crackdown in late April, some are now also calling for Assad’s resignation and for trials of some of the regime’s figures. Government buildings and portraits and statues of both President Bashar el-Assad and his father, former president Hafez el-Assad, have been defaced. That more protesters now openly call for curbs on the security services is considered by one analyst “an unprecedented and important sign of the widespread popular loss of fear of security agencies.”[iv]

How much support do the Syrian protesters have?

In contrast to the Egyptian and Yemeni protest movements, Syria’s capital Damascus has not been the scene of large-scale protests.[v] On the other hand, the protests—the largest during Bachar al-Assad’s presidency—are happening in many centres across Syria, and their number and size have grown steadily since late March.[vi] It is unclear whether their growth reflects merely the escalating anger of a small but growing fraction of the population over the government’s brutal reaction to its protests,[vii] or a more widespread desire for major change. The lack of independent Syria media on the ground, and the current barring of most foreign journalists, make it difficult to gauge the scale of the protest movement.

What are the root grievances behind the protests in Syria?

Concentration and abuse of power by Assad family, the Baath Party and Alawi Muslims.  Article 8 of the Syrian constitution enshrines the Baath party —a secularist party mixing socialism with Arab nationalism—as the leading party of Syrian society and state. Other parties must assent to continuation of Baath Party rule in order to be allowed to operate legally. Hafez el-Assad— a member of the until then much discriminated-against Alawi sect and father of the current president—assumed control of the Baath Party and with it the presidency in 1970, and ruled until his death in 2000. He installed Alawis in top positions throughout the military and intelligence apparatus. Between Hafez and Bashar Assad, who took over after his father’s death, the Assads have held the presidency for four decades. Assad’s security apparatus, like his father’s, has frequently violated basic human rights. Syria scored a dismal 2.5 out of 10 in Transparency International’s “2010 Corruption Perceptions Index.”

Economic woes and drought-induced food insecurity and poverty. Five successive droughts have plunged 800,000 Syrians into deep poverty[viii] – 32 percent of Syrians are now living on $2.00 a day or less – driving hundreds of thousands of families into other regions and the cities. The droughts have also severely reduced Syrians’ access to food staples. The UN has documented grave impacts on children’s health in many provinces. Since food prices are soaring around the world, the government’s food imports have not solved the problem of food insecurity. The official unemployment rate is 8 percent, but the real unemployment rate is believed to be much higher, in part due to the “youth bulge”, as well as the drought-related loss of livelihoods.[ix]  Many Syrians cannot cope with the soaring price of the wheat, estimated to have risen by 100 percent over the last year by Syria specialist Joshua Landis.[x]

Bashar Assad’s recent experiment with the Chinese model of development – one-party rule coupled with a more “market-oriented” economic policy and pursuit of a place in the “globalized economy”—has fizzled. Foreign investment did not flood in as hoped and unemployment increased. To complicate matters, Syria’s declining oil output coupled with increased internal demand for petroleum products led its oil balance to become negative in 2007. Measures to reduce discontent (e.g. last year’s salary increases for public workers) have increased Syria’s deficit. The presence of 1 million Iraqi refugees is an additional source of economic stress. These circumstances mean Assad’s ability to indefinitely continue, let alone expand measures to alleviate food insecurity and poverty is limited.

Can President al-Assad be expected to remain in power?

Assad’s independence vis-à-vis the US and Israel has earned him support in Syria. His success in preventing open religious strife is also considered by many Syrians one good reason to not oust him, despite possible misgivings about other aspects of his rule.[xi] This is especially true given the lack of clarity about who and what might replace him and the Baath party.  When he assumed power shortly after his father died in 2000, he was widely perceived by many as less imbedded in the power matrix and more open to reform.[xii] These factors may explain the emergence of large pro-government counter-demonstrations in March and April, 2011.

The recent resignation of 230 members of the Baath party in protest against the government’s violence against the demonstrations was a jolt to Assad’s rule.  Nevertheless, this development did not echo the ship-jumping of key government figures that Libya’s Gaddafi has suffered.

Analysts familiar with Assad believe he would prefer to go down in history as a reformer rather than as a dictatorial pariah. Some think that the government’s contradictory response to the recent protests—abrupt shifts between repression and concessions—are symptomatic of divisions between him and others within both the Baath Party and the military.  Some experts warn that if Assad loses control, hardliners will take over.[xiii]

[i] The Muslim Brotherhood is banned in Syria, and has periodically been subjected to brutal repression, most notably the 1982 Hama massacre, which left between 10,000 and 25,000 dead or wounded.

[ii] Syria Comment. “The Man behind ‘Syria Revolution 2011’Facebook-Page Speaks Out,” April 24, 2011. Fida’ ad-Din Tariif as-Sayyid (26), runs the web-page. Analysts says his comments early during the protests were similar in language and content to comments from Ikhwan, the Muslim Brotherhood website.