CJPME Factsheet 120, published March, 2011: This factsheet provides an overview of Egypt’s Coptic Christian community, which represent 10% of Egyptians. Since there is no racial or ethnic difference between Christian and Muslim Egyptians, this factsheet looks at who the Coptic Christians of Egypt are, how are the relations between them vis-à-vis their government, how well they co-exist with Muslims, and what are the kinds of discriminations they face in Egyptian society.

Factsheet Series No. 120, created: March 2011, Canadians for Justice and Peace in the Middle East
View factsheet in PDF format 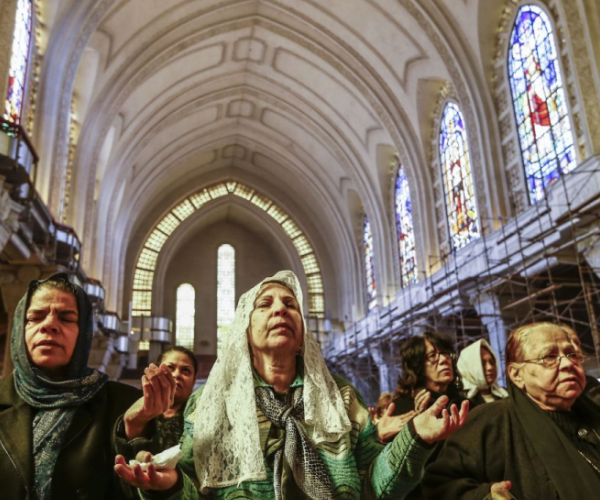 Who are the Coptic Christians of Egypt?

When Egypt was first invaded by Arabs from the Arabian Peninsula in the 7th century, they referred to the indigenous population of the land as Copts. At the time, most Egyptians were Christians, following the introduction of Christianity in the first century AD and the founding of the Coptic Church of Alexandria, one of the oldest churches in Christendom. The Copts had their own language, which was related to an ancient Egyptian language. After the Arab invasion, Arabic quickly replaced the Coptic language and by the 10th century, Islam became the dominant religion in Egypt.[1]  Copts believe in the single divine nature of Christ, as opposed to a dual nature, both human and divine, professed by the Western Christian traditions.[2] Most Copts belong to the Coptic Orthodox Church which has its own pope based in the Alexandria, whereas others are part of the Coptic Catholic Church and the CopticProtestantChurch.

Due to religious conversion and intermarriage since the 7th century, there is no ethnic or racial difference between Christian and Muslim Egyptians. Today, Coptic Christians represent 10% of Egyptians and are mainly concentrated in the Upper Egypt region (i.e. southern Egypt.)[3] A large percentage of Coptic Egyptians also reside in Cairo, notably in the districts of Shubra, Faggala and Daher, and Alexandria.[4]

How are relations between the Copts and the Egyptian government?

The Coptic community maintains a wary relationship with the state, as political activities under Mubarak were typically repressed in Egypt. In order to defend its interests as a minority group within the country, the community has been forced to depend on official Coptic Orthodox Church relations with the government. This exclusive representation of Copts to the State has created a patron-client relationship whereby concessions to the Coptic Church are granted in exchange for the assurance of the Coptic community’s political support.[5] For example, during the 2005 People’s Assembly elections, Coptic Pope Shenouda III urged his followers to vote for the National Democratic Party composed of Muslim candidates only, when other parties with Christian candidates were also running for election.[6] Although such obligation to the state limits the Coptic community’s freedom, it has yielded some benefits. In effect, the Coptic Orthodox Church obtained the permission to apply the Christian Canon Law for personal and civil status court rulings, notably in the case of marriage and divorce for Christians.[7] This, despite living in a country whose constitution decrees Islam as the religion of the nation, and Islamic Law as the principal source of jurisprudence.[8] As former President Hosni Mubarak was ousted in early 2011, some Copts expressed concern that the resulting political instability may leave them dangerously exposed to a new government more tolerant of Islamist extremism and less inclined to religious equality.[9]

How well do Christians and Muslims co-exist in Egypt?

In a general sense, Egypt`s Christians and Muslims co-exist well with one another.  In terms of social status, Copts in Egypt are present through all social strata – rich and poor.  They work in all sectors from peasantry to entrepreneurship and are well represented in prestigious professions such as engineering and medicine.[10]  Copts have also been active participants in Egyptian nationalist causes. [11] Christians have risen along with their Muslim counterparts during many political protests such as the ‘Urabi revolt in 1882, the 1919 revolution, and the ousting of President Hosni Mubarak in February 2011. In fact during the protests against Mubarak’s regime in Cairo’s Tahrir Square, Copts made human walls around Muslims as they performed their prayers. It was also common during the protests to witness banners with the Muslim crescent embracing the Christian cross, expressing national unity in common struggles.[12]

Despite relatively successful religious co-existence, discrimination does occur against Copts. As of 2009, for example, no Christians had ever served as president or dean of the country’s public universities.  Other examples include the fact that, of the 700 high-level positions in the public university system of Egypt, only one is filled by a Christian.[13]  Likewise, the Egyptian government excludes Copts from the intelligence and security services.[14]

The Egyptian government also has practices which violate religious minorities’ constitutional right to adhere to the religion of their choice. Under Egyptian law, all citizens must obtain an identification card which identifies one’s religion. Yet a child under 16 years old whose father converts to Islam is automatically considered a Muslim, and is likely to be denied an identity card if he insists on keeping his Christian faith. Similarly, converts from Islam to Christianity are not recognized and can be denied identity cards which reflect their new religion.  Converts from Christianity to Islam do not face this same challenge.  Converts also face harassment by Egyptian authorities. In 2004, a Christian of Muslim birth accused of helping other converts forge identity papers, was beaten and tortured in Cairo’s El-Mosky police station.[15] In addition to violating international prohibitions on torture to which Egypt is a signatory, such incidents also violate Article 46 of the Egyptian constitution which guarantees freedom of belief and freedom to practice religious rites.[16]  As of 2011, Lawyer Peter Ramses Al Nagar has represented more than 3000 Christians who have been forced to live with a Muslim identity card.[17]

Christians in Egypt also argue that demands to build churches are often disregarded or intentionally delayed through state bureaucracy, as compared to the demands for building mosques.[18] In effect, Egypt continues archaic practices concerning the construction of religious buildings, practices which result in discrimination against Christians wanting to build or expand buildings.[19]

In addition, there have been several attacks on Copts in recent years. The largest of them happened in December 2010 outside an Alexandrian Church on New Year’s Eve, killing 21 Christians.[20] Some of the violence recorded earlier that same year occurred in the city of Marsa Matrouh, where an Imam called upon the Muslims to cleanse the city of its infidels.  This call incited local Muslims to attack Christian homes, shops and cars. [21]Similarly, in Naga Hamadi, a drive-by shooting targeted Christians leaving a Coptic mass, resulting in the deaths of seven Christians.[22] Egyptian Bishop Ghais Malik has emphasized, however, that such attacks are not necessarily sectarian, but may be the result of political extremists seeking to destabilize the country, moreso than to persecute Christians.[23]  Nevertheless, even if these attacks are considered non-discriminatory in nature, tension is present, and the state is accused of not doing enough to prevent violence against Christians. In 2010, former Egyptian President Hosni Mubarak said he increased the protection of Christian churches “faced with the forces of terrorism and extremism.”  Unfortunately, this pledge did not prevent even deadlier attacks against Christians from occurring just a few months later.[24]