CJPME Factsheet 122, published May, 2011: This factsheet provides a biographical depiction of Libya’s longtime ruler, Muammar Gaddafi. This factsheet looks at historical context surrounding Gaddafi’s ascendance to power, Libya’s transformation under his rule, his tensions and reconciliation with the West, his base of support among the populace, and what will be his legacy after decades in power.

Factsheet Series No. 122, created: May 2011, Canadians for Justice and Peace in the Middle East
View factsheet in PDF format 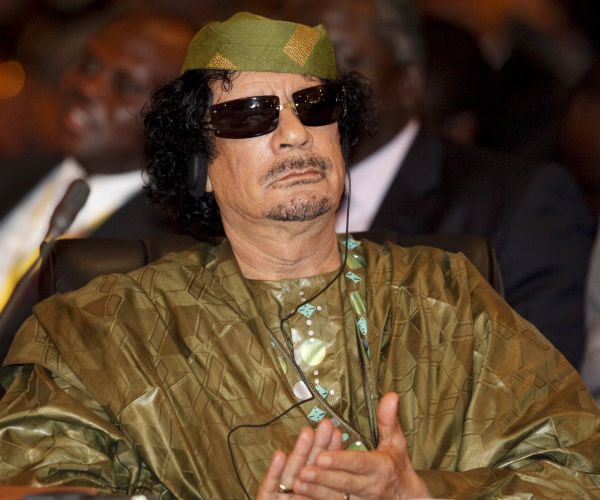 In what context did Libyan leader Muammar Gaddafi come to power?

On September 1, 1969, a group of about 100 junior army officers – the “Free Unionist Officers” – led by Muammar Gaddafi, then 27, deposed aging King Idris. Prior to King Idris, Libya had been under foreign rule for centuries: Ottoman rule from 1551 to 1911, then Italian rule from 1911 to 1951.  Idris, ruler since Libya’s 1951 independence, was the grandson of the founder of the Sanusi Order, an Islamic revival movement founded in al-Bayda in the 1840s. He thus drew much of his political support from the tribes of the interior of Cyrenaica (eastern Libya) where the Sanusi Order was most influential.

A week after the 1969 coup, the name of the new commander in chief—Muammar Gaddafi—was revealed. He was identified as chairman of a 12-member Revolutionary Command Council (RCC). The other RCC members’ names were only revealed in January 1970.  Gaddafi was the RCC’s central figure from the outset, embodying its repudiation of foreign domination and earlier corrupt regimes.

The RCC officers were of varied backgrounds — 5 of the 12 were from fairly privileged tribes, although Gaddafi later tried to present the RCC as uniformly of humble origins. They were young and had enrolled in the BenghaziMilitaryAcademy in hopes of upward mobility and an opportunity to overthrow the monarchy.[1] Like the then much admired Egyptian leader Gamal Abdel Nasser,[2] they were pan-Arab nationalists and Arab socialists, interested in asserting Libya’s political sovereignty and in achieving social and economic reform.

The RCC purged the diplomatic corps and upper government bureaucracy of people tied to King Idris, and ran government ministries directly, except for the Ministry of Oil, for which the RCC lacked technical knowledge. The RCC established various bodies purporting to enable popular participation in decision-making—Popular Congresses, the Arab Socialist Union and the “Popular Revolution.” However, the Libyan public quickly became disillusioned with these institutions, as real political power remained with the RCC, especially Gaddafi. This contradiction between the formal but mythical “popular” power, and the reality of Gaddafi’s domination of all decision-making, has characterized Libya ever since.

Divisions arose within the RCC over the use of Libya’s oil income—99 percent of government revenues—and over Gaddafi’s dominance. Gaddafi prevailed over an attempted coup by several other RCC members in 1975. By the end of 1975, the original 12-member RCC was reduced to five Gaddafi loyalists. He then consolidated his control, removing both civilian and military personnel suspected of potential disloyalty from the country’s planning institutes and ministries. Sensitive security and army positions were steadily filled by members of Gaddafi’s tribe, the Qadhadhfa, and allied tribes.[3]

Despite the growing repression, given Libya’s large oil revenues and relatively small population, the Gaddafi government was able to provide health care, education, and subsidized housing. After 1993 Gaddafi established a system of People’s Social Leadership Committees (PSLC), composed of tribal leaders and other influential persons. The PSLCs channel state largesse, like student grants and subsidized housing, but are expected to discipline any anti-Gaddafi dissenters among their respective tribes, or risk collective punishment.[5]  The implicit social contract under Gaddafi has been that in return for citizens’ political quiescence, the Libyan state would take care of their most basic daily economic needs.[6]

Tensions and reconciliation with the West

Tensions, 1978-1999: Gaddafi’s support for various radical groups, including some involved in acts of international terrorism, led to US trade restrictions and the withdrawal of oil companies under Jimmy Carter. Under Ronald Reagan, a full-scale oil embargo and sanctions were imposed and Libya’s capital, Tripoli, and its second largest city, Benghazi, were bombed in April 1986.  Libyans were implicated in the December 1988 bombing of a plane over Lockerbie, Scotland and the September 1989 bombing of a UTA flight over Niger. As a result, in March 1992 the UN Security Council passed Resolution 748 imposing an economic embargo on Libya after Gaddafi refused to turn over the terror suspects. Although the direct impact of the sanctions was minor, when world oil prices dropped in the 90s Gaddafi’s ability to maintain his social contract with Libyans was jeopardized. In effect, his political survival depended on reconciliation with the West.

Reconciliation, 1999-2010: Following the intercession of Nelson Mandela and UN Secretary-General Kofi Annan, Gaddafi agreed in 1999 to hand over the Lockerbie bombing suspects to the Netherlands for trial under Scottish law. UN sanctions were suspended, although US sanctions continued. In 2003, Libya announced its abandonment of its weapons of mass destruction programmes. In August 2003 Libya wrote to the United Nations formally assuming “responsibility for the actions of its officials” in the Lockerbie bombing and agreed to pay $2.7 billion compensation to the families of the 270 victims.[7] In 2004, the US lifted economic sanctions and resumed official relations with Libya, followed by key Western European leaders. Despite his previous public railing against the West, since 2005 Gaddafi has welcomed ExxonMobil, Chevron, Shell and other oil giants to help exploit Libya’s oil and gas wealth.[8]

Where does Gaddafi draw his support? [9]

With its large oil revenues and small population, the Gaddafi government has been able to keep Libya’s incidence of absolute and relative poverty lower than neighbouring Egypt’s.[10] Average incomes are $12,000 a year—a fraction of those in the Gulf States, but five times those of Egypt.[11] Nonetheless, Gaddafi’s government failed to use its oil revenues to diversify and strengthen the economy.  Unemployment has therefore been a persistent problem, and is now reportedly 30-35 percent. The quality of Libyan housing and hospitals also lags behind that of the Gulf oil powers.

In addition to maintaining the support of his own tribe (the Qadhadhfa), and the support of many in Libya’s civil service, Gaddafi also has a populist appeal because of his many gestures asserting Libya’s sovereignty vis-à-vis the West and his talk of social equality. He has also provided symbolic outlets for the venting of frustrations, for example by encouraging voicing of criticisms at the Popular Congresses. These gestures, combined with an extensive security apparatus and the prohibition on formation of political parties, staved off the emergence of any organized opposition despite the economic problems. Nonetheless, Libyans are well aware that their country remains underdeveloped despite being extremely rich in oil resources.

What will be Gaddafi’s legacy?

Gaddafi’s legacy is a Libya that has made considerable advances in health care and education, but failed to use its vast oil revenues as a springboard to achieve genuine economic development. Libyans’ aspirations have been stoked by Gaddafi’s “popular power” discourse, but thwarted by the matrix of control ensuring his domination of real economic and political power.

[2]Nasser, along with other young army officers, had overthrown Egypt’s monarchy in 1952 and proceeded to establish a nationalist government with a strong pan-Arab, social reform thrust.

[7] Ronald Bruce St John noted in conversation with CJPME May 6 2011 that Libya’s letter was much more nuanced than western media implied, likely because an outright admission of responsibility would leave Gaddafi open to charges in the International Criminal Court. Once sanctions were lifted, Gaddafi often implied that the $2.7 billion in compensation to the victims was a good investment, since it had resulted $4 billion in direct foreign investment in Libya in 2004, and another $10 billion over the next four years.