CJPME Factsheet 123, published May, 2011: This factsheet provides an overview of Libya’s ongoing civil war after three months of violence. This factsheet addresses frequently asked questions regarding the conflict, such as: what triggered protests in Libya? What are the protesters’ larger grievances? How did civil war erupt? Who stands with or against Gaddafi? And how has NATO justified its military intervention in Libya?

Factsheet Series No. 123, created: May 2011, Canadians for Justice and Peace in the Middle East
View factsheet in PDF format 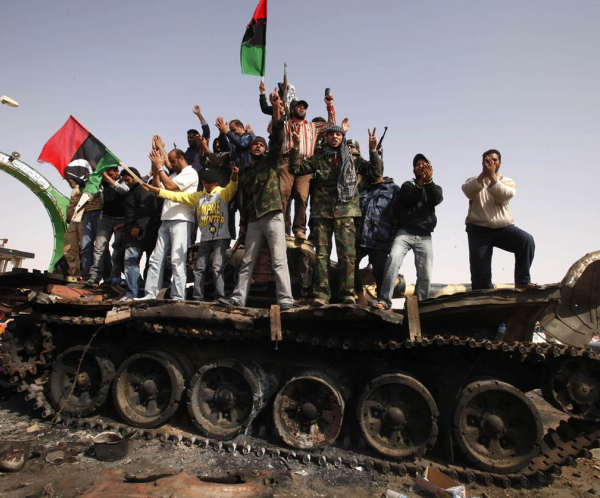 What triggered protests in Libya in early 2011?

Protests in Libya began on January 14, in the eastern town of al-Bayda over housing conditions.[1] The February 15 arrest of a human rights activist representing the families of victims of the Abu Salim prison massacre (see below) sparked protests by 500-600 people February 16 in the city of Benghazi, also in eastern Libya. On February 17, police killed 15 Benghazi protesters during a large organized protest. The army’s elite 32nd Brigade, commanded by Muammar Gaddafi’s son Khamis, swept into Bayda and Benghazi February 17-18, killing dozens of people, sparking outrage and even larger protests. Protesters’ initial demands then morphed into calls for Gaddafi’s ouster. Benghazi remains a rebel stronghold.

What are the protesters’ larger grievances?

Regional disparities in the distribution of the benefits of oil revenues. Although most of Libya’s proven oil and gas reserves lie in eastern Libya, it has long been neglected in favour of the western province around Tripoli, the capital. According to a leaked US embassy cable, Gaddafi deliberately pursued policies to “keep the east poor.” Half of the men aged 18 to 34 in eastern Libya are unemployed, according to a local source quoted in the cable.[2] Periodic uprisings in eastern Libya have also been sharply suppressed over the years, intensifying resentment of Gaddafi there.[3]

Gross human rights violations. Gaddafi’s Libya has a history of gross human rights violations which remain unpunished and largely unacknowledged by the government. Chief among them is the 1996 Abu Salim prison massacre in Benghazi in which about 1200 prisoners were shot to death by uniformed personnel after rioting over prison conditions and visitation restrictions. Most prisoners were Islamists or prisoners of conscience of other stripes, arbitrarily detained and not charged with any offences. The victims’ relatives began protests demanding the bodies and explanations in 2007 [4] and were among the first to protest in February 2011. Most Libyans likely did not know about Abu Salim until recently, but it is now a national issue. When rebel forces liberated the Benghazi prison in 2011, they found equipment used to torture multiple victims simultaneously.[5]

Corruption. Cambridge University researcher George Joffe says corruption increased along with foreign economic involvement—which rocketed after Gaddafi’s rapprochement with the west in 2003. According to University of Exeter Professor Tim Niblock, there has been a gap of several billion dollars per year between Libya’s oil revenues and its government spending; he asserts that the Gaddafi family has squirreled this wealth away in foreign bank accounts.[6] In 2010, Transparency International rated Libya a dismal 2.2 out of 10 in its “Corruption Perceptions Index.”[7] Gaddafi’s personal fortune is estimated at US$10 billion to $83 billion.[8]

Concentration of power under Gaddafi and his entourage.  Shortly after the 1969 coup d’état by Gaddafi and the other Free Unionist Officers, Gaddafi began to accumulate power. [9]  Libya’s 1969 constitution assigned all powers to Gaddafi and his fellow army officers[10] and does not guarantee freedom of expression, association or assembly; political parties are banned.[11]  Libya expert Ronald Bruce St John notes a recent trend in which the participation of one or more Gaddafi children has become increasingly necessary for the success of any large project or business deal.[12] Some of Gaddafi’s children also occupy key posts in the military and security forces.

How did civil war erupt in Libya?

Due to the government’s brutal reactions to the initial protests, by February 22, 300 protesters, mostly in eastern Libya, had been killed. Some of the protesters armed themselves, seizing weapons from Gaddafi troops they had over-run or from defecting soldiers. They then pushed west, capturing a string of coastal cities and towns, and even centres west and south of Tripoli in late February. However, in early March Gaddafi forces launched devastating air strikes and tank attacks, inflicting high civilian and rebel casualties. In the second week of March some rebel forces began pleading for the international community to impose a “no-fly zone.” By mid-March Gaddafi’s forces had retaken many cities with considerable violence and were pushing east toward Benghazi. They also encircled and began bombarding the western city of Misrata. The country divided along pro and anti-Gaddafi lines.

Who in Libya stands with or against Gaddafi?

It is difficult to gage accurately who supports or opposes Gaddafi, given the polarization and individuals’ fears that their positioning may later be held against them or their group by either Gaddafi or the rebels. However, the following appears to be reasonably certain:

With Gaddafi. Gaddafi appears to have considerable support in Tripoli, the capital, where a significant percent of the population have jobs in government ministries. There have been large pro-Gaddafi demonstrations there. Gaddafi’s own tribe, the Qadhadhfa, seems to be solidly behind him.

Sitting the conflict out. At least one Warfalla tribe leader criticized Gaddafi, and the Al-Zawiya tribe threatened to halt the flow of oil if Qaddafi did not stop killing protesters. Former interior minister Abdul Fattah Younis claimed that by Feb. 23 most tribes were united in their opposition.[13][14] However, recent reports about tribal stances are contradictory. Ronald Bruce St. John believes that many of the tribes, including most of the Warfalla members, are unwilling to attack either Gaddafi or the rebels, and are instead waiting to see who prevails; he considers tribal affiliations still crucial, especially given the destruction of civil society;[15] another commentator says tribal loyalties play no role in current protests.[16]

Against Gaddafi. Benghazi residents’ support for the rebels is solid enough that alternative governing structures have been set up there. The city of Misrata, a rebel stronghold in western Libya, has been under bombardment by Gaddafi loyalist troops for two months now, yet continues to resist. Libya’s ambassador to the UN and other diplomats resigned and soldiers in the east began defecting days after the uprising began in Benghazi. The top defector so far is Moussa Koussa, former head of intelligence and Gaddafi’s foreign affairs minister, who surfaced in London March 30, days after both the interior and justice ministers defected. Libya’s small-scale manufacturers, retailers and private farmers, who lost their livelihoods when their activities were outlawed in the late 1970s and 80s, are also likely strongly sympathetic to the rebels. Islamists, brutally suppressed, also oppose Gaddafi.

How has NATO justified its military intervention in Libya?

On Mar. 17, Gaddafi vowed to storm Benghazi with “no mercy, no pity.” Hours later, after weeks of dithering, the UN Security Council, initially with Arab League support, authorised member states to use military force to establish a “no-fly zone” over Libya and “to protect civilians and civilian populated areas,” but excluded any on-the-ground occupation of Libyan territory. It also demanded an immediate ceasefire by Gaddafi. Gaddafi announced one, but his troops continued advancing toward Benghazi and shelling it. Mar.19, with Gaddafi forces 3 kilometres from Benghazi, French, British and US forces began air strikes. Rebel forces and protesters expressed relief. Within days, rebel forces regained lost ground and by Mar. 28 were again approaching Tripoli. However, Gaddafi’s forces and mercenaries, better-armed, fought back. As of May 5 a stalemate exists: Gaddafi’s sons are casting about in Europe for an exit strategy, the rebels are complaining about lack of support from NATO, and western governments are worrying about “mission creep” and scrambling to promote certain opposition figures over others.