CJPME Factsheet 125, published June, 2011: This factsheet looks at Canada’s continued defunding of the United Nations Relief and Works Agency for Palestinians in the Near East (UNRWA), which provides assistance, protection and advocacy to approximately 4.8 million Palestinian refugees in the Middle East. Until 2009, Canada had been one of the top 20 contributors to UNRWA’s core programs. While UNRWA’s funding grew consistently between 2000 and 2008, Canada was the only donor country to defund UNRWA’s core programs during this period.

Factsheet Series No. 125, created: June 2011, Canadians for Justice and Peace in the Middle East
View factsheet in PDF format 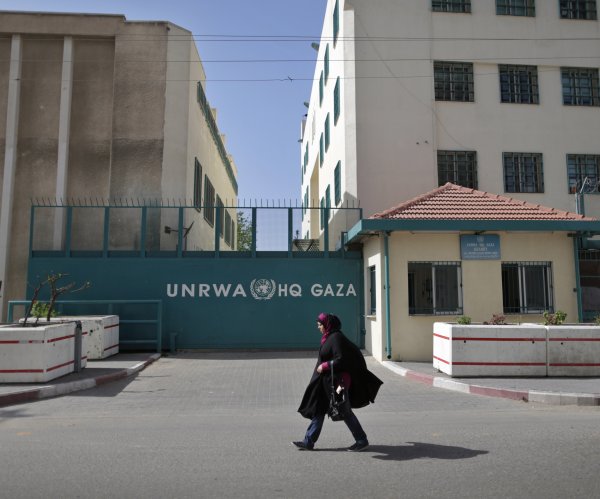 What is UNRWA and what does it do?

The United Nations Relief and Works Agency for Palestinians in the Near East (UNRWA) was created through United Nations General Assembly Resolution 302 (IV) in 1949. Its purpose was to replace a series of ad hoc humanitarian programs mobilized to deal with the forced displacement of at least 700,000 Palestinians from their homes between 1947 and 1949.[i] Although originally conceived as a temporary organization, UNRWA has repeatedly adjusted its programs to meet the changing needs of the refugees it serves.

Today, UNRWA provides assistance, protection and advocacy to approximately 4.8 million Palestinian refugees in the Middle East.[ii] Its current services fall into six broad programs: health, education, relief and social services, micro-credit financing, infrastructure and camp improvement, and emergency aid.[iii] UNRWA provides services directly to those refugees living in Jordan, Lebanon, Syria, the Gaza Strip, and the West Bank including East Jerusalem. It does not own, administer or police any refugee camps as it is only responsible for the provision of services within these camps.[iv]

How has Canada’s funding of UNRWA changed?

The UNRWA is funded almost entirely by voluntary donations, the majority of which come from donor countries. Canada has been one of UNRWA’s largest contributors over the past 60 years and has consistently funded the agency through the Canadian International Development Agency (CIDA). Until recently it was a reliable financial supporter of the agency’s core programs. In 2009, however, Canada significantly altered its funding of UNRWA in two ways. First, it began an overall decrease of its contribution to UNRWA from $28 million in 2008 to $20 million in 2009. This decrease has continued, to where Canada gave only $15.1 million in 2010.[v] Second, Canada earmarked all of its funds in 2009 ($20 million) to UNRWA’s Emergency Appeal, and contributed no funds to its core programs.[vi] UNRWA’s Emergency Appeal is a request for donations for a variety of urgent refugee needs – often related to unfolding events – including food assistance, emergency health, environmental health, mental health, and other community-based programs.[vii] Canada’s contributions to UNRWA’s Emergency Appeal from 2009 to 2011 were specifically earmarked for food assistance and job creation programs.[viii] 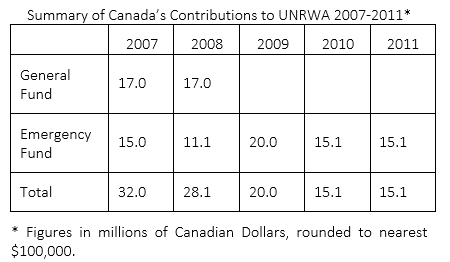 Why has Canada changed its funding of UNRWA?

In a confusing statement early in 2010,[xii] Vic Toews explained the changes by saying, “[…] we want to put that money only into programs that are consistent with Canadian values.”[xiii] Nevertheless, this assertion contradicts internal CIDA documents which report that UNRWA’s activities were congruent with Canadian priorities and indispensable in meeting the basic needs of Palestinian refugees. [xiv]  Subsequently, CIDA indicated that its decision to alter its funding of UNRWA – seemingly to favour funding to the Palestinian Authority (PA) – was made in order to reflect the organization’s new commitment to food security and security institutions, both of which are outlined as major development focuses in CIDA’s 2009-2010 Report on West Bank and Gaza.[xv] Toews suggested that this new funding focus would be in effect for the next five years.[xvi]  In accordance with this strategy, CIDA contributed $15 million to UNRWA’s emergency programs in 2010 and 2011, and nothing to UNRWA core programs.[xvii]

Ultimately, Canada seems to have dropped funding to the community development programs of UNWRA, in favour of greater policing and “security institution” funding for the PA.[xviii] A CIDA representative asserted that by earmarking funds for UNRWA’s emergency programs, Canadian aid was being spent in a more efficient, focused, and accountable way.[xix] According to media reports Canada’s reallocation of funds reflected the government’s concern with the organization’s supposed lack of accountability and transparency in the spending of Canadian funds.[xx] It is unclear where concerns with respect to any misuse of Canadian money originated given that CIDA concluded in 2009 that UNRWA represented a “low risk from a financial management perspective.”[xxi]

What has UNRWA’s reaction been?

UNRWA officials were confused and disappointed with Canada’s decision to decrease and reallocate its funding of the agency. When the change was implemented, UNRWA officials expressed their surprise at the funding changes and said they had never received an explanation from the Canadian government.[xxii]  UNRWA protested the funding changes and organized high-level meetings with Bev Oda, the minister responsible for CIDA to urge Canada to continue its support of UNRWA core programs.[xxiii] [xxiv]

There is concern that Canada’s new funding strategy may become a stepping stone to cutting UNRWA funding altogether.  By positioning Canadian UNRWA funding as short-term financial aid for “emergency programs,” Canada’s Conservative government may subsequently claim that such funding no longer makes sense.  However, as expressed by one UNRWA official, “There are groups who seem to think that if UNRWA were de-funded and disappeared, the refugees would disappear too. This is a deluded fiction.” [xxv]

[i] For more information see CJPME Factsheet No. 72 UNRWA, History and Context, January 2010.

[xii] In his statement, Toews confused funding for UNRWA with that for the Palestinian Authority, but was unchallenged by reporters on this point.