CJPME Factsheet 130, published July, 2011: This factsheet looks at the Palestinian and Israeli treatment of prisoners. Whereas the 2006 kidnap of Israeli soldier Gilad Shalit made international headlines, the world remained silent about the 5,383 Palestinian prisoners detained by the Israeli Prison Service (IPS). Canada, which has ratified several human rights treaties pertaining to arrests, imprisonment and torture, remains silent on the subject of Palestinian prisoners and the conditions of their imprisonment.

Factsheet Series No. 130, created: July 2011, Canadians for Justice and Peace in the Middle East
View factsheet in PDF format 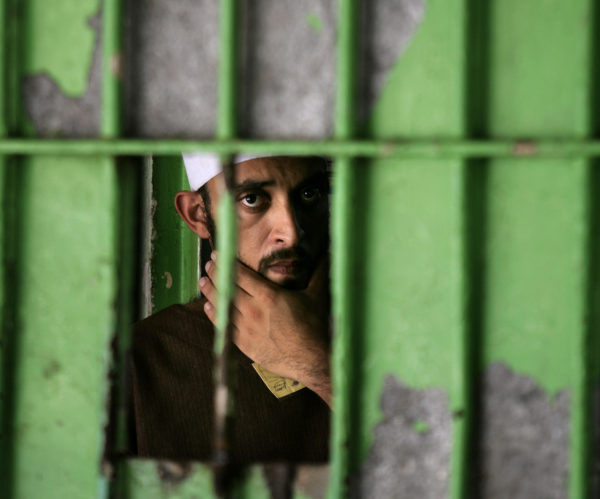 In June 2006, Israeli soldier Gilad Shalit was kidnapped by Hamas near the Kerem Shalom crossing in Israel while serving his compulsory military service for Israel. He was nineteen years old at the time, and was the first Israeli soldier to be captured by Palestinians since 1994.[1]  Shalit is currently held in an unknown location in Gaza and was last heard of in October 2009 through a video message released by Hamas. Since Shalit’s abduction, there have been various – and sometimes high-profile – domestic and international diplomatic efforts to secure his release. Unfortunately, there has been little attention paid by the international community to the thousands of Palestinian prisoners in Israeli custody who face similar human rights violations to those faced by Shalit.

What are the relative numbers of Palestinian/Israeli prisoners?

Under what circumstances are prisoners detained?

The Palestinian prisoners held by Israel under administrative detention are typically social activists, academics, university students, politicians (members of the Palestinian Legislative Council), children, or women.[7] Under Israeli occupation law, Palestinians can be administratively detained for a maximum period of 6 months, a period which can be extended for “inordinately lengthy periods”.[8] In most cases administrative detainees are not informed of the charges against them, thus preventing them the opportunity to mount a defence.[9] This is a violation of the Fourth Geneva Convention (articles 70 and 71) which “requires that a fair trial be established and the accused clearly informed of their indictments”.[10] Following the abduction of Shalit in 2006, dozens of Palestinians employed by the Palestinian Authority were detained.[11]  Minister of education Nasser a-Din Sh’ar, and the Minister of Fence and Settlement Affairs Wasfi Qaba, were among the senior Palestinian officials detained at the time by the Israeli army.[12] Other political prisoners administratively detained include Hamas members of Parliament Khalil Al-Rabai and Hatem Qafisha.[13]

Palestinian children are also detained on the basis of stone throwing. In 2010 a total of 204 Palestinian minors were arrested for throwing stones. Most often the arrests take place at checkpoints or during the night[18]. During the interrogation, Palestinian minors are not granted the right to have a parent present[19]. Child detainees have reported the use of both physical and verbal violence during interrogation.[20] UN Women has also reported that in some cases women were being culturally, verbally, psychologically, physically or sexually harassed during their detentions.[21]

What are the prison conditions of Palestinian/Israeli detainees?

Israel has a dual system of incarceration, which consists of the IPS prisons and Israeli military detention camps. Israel’s detention camps are reserved exclusively for Palestinians from the occupied territories.[22] Ketsiot is the most inadequate of the Israeli military detention camps, according to Middle East Watch, because it is located in a foreign environment which does not allow for family visits or reliable mail service.[23] The fact that Ketsiot is located in Israel is a violation of international law because the Fourth Geneva Convention forbids the transfer of incarcerated persons from occupied territories to the territory of the Occupying Power.[24]

In general, detainees in Israeli military camps live in overcrowded tents which allow them no more than 3 square meters.[25] Palestinians administratively detained are also held in these camps and are therefore subject to the harsh conditions such as overcrowding, poor nourishment, inadequate clothing and hygiene.[26] This dual system of incarceration subjects Palestinian prisoners to substandard conditions in detention camps in comparison to Israeli prisoner in the IPS.[27]

DCI-Palestine has received similar complaints regarding the living conditions of Palestinian children prisoners which include: overcrowding, poor ventilation and access to natural light, poor quality and inadequate amount of food, harsh treatment by prison officials and boredom.[28] Torture and ill-treatment of child prisoners have also been reported in the form of head covering, beating and being suspended by their arms and legs.[29]

How has Canada responded to the violation of Human Rights?

Since his capture in 2006, the Canadian government has released several strongly-worded statements urging the immediate and unconditional release of Gilad Shalit. In comparison, the Canadian government has been silent on the subject of Palestinian prisoners in Israel and the human rights violations surrounding their imprisonment. This, despite the fact that Canada has ratified several human rights treaties pertaining to such detainees: the Convention on the Rights of the Child (which embodies the human rights of minors in prison around the world), the Convention against Torture (which protects citizens of the world from all forms of ill-treatment and torture),[30] and others.

Although the Canadian government has failed to call for the release of Palestinian prisoners under administrative detention, the United Nations has been vocal on the issue. In a press release dated March 7th 2011, UN Secretary General Ban Ki-moon argued that the release of the Palestinian prisoners in Israel could boost future peace prospects.[31] Following the Secretary General’s statement, the General Assembly held a meeting on the Question of Palestine and “turned its attention to the bleak situation and conditions of confinement for Palestinians in Israeli prisons and detention facilities”.[32]

[2] “Statistics on Palestinians in custody of the Israeli security forces.” B’Tselem, April 2011.

[3] For more information see CJMPE Factsheet No.38 Torture and Detention in Israel, May 2008.

[19] “No Minor Matter: Violation of the Rights of Palestinian Minors Arrested by Israel on Suspicion of Stone-Throwing” B’Tsalem . July 2011 (p.32).