CJPME Factsheet 134, published August, 2011: This factsheet provides an overview of the numerous actions by Israel’s government that have prevented the resumption of negotiations with Palestinian officials. This factsheet also highlights Canada’s position on the impasse, as well as the Harper government’s failure to promote a symmetrical bilateral negotiation that ensures fairness to the weaker of the two parties, the Palestinians.

Factsheet Series No. 134, created: August 2011, Canadians for Justice and Peace in the Middle East
View factsheet in PDF format 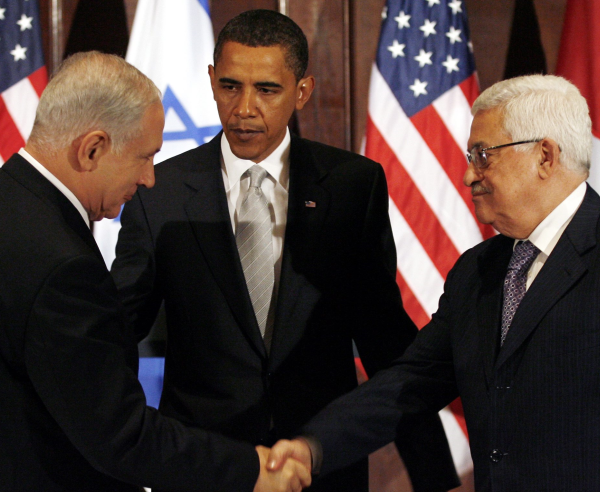 Why aren’t Israelis and Palestinians in direct negotiations?

Direct negotiations between Israelis and Palestinians are not taking place for the following reasons:

a) Resumption of colony-building: Israel’s resumption of the construction of Jewish-only colonies (a.k.a. “settlements”) in the occupied Palestinian territories (oPt) triggered the suspension of direct peace talks shortly after they had recommenced in September 2010. Colony-building reduces the land available for the establishment of the long-postponed Palestinian state, and is almost always accomplished by evicting Palestinians from their homes and lands. It also violates international law by transferring civilians of the occupying power—Israel—to the territory under its military occupation.[1] Colony-building is thus utterly inimical to peace negotiations in which the key issue will be the division of land between Israelis and Palestinians. For this reason, the US, the EU and Palestinian leaders have all implored Israel not to resume colony building. Yet on August 11, 2011 Israel announced final approval of yet another 1700 units in East Jerusalem, and the impending approval of 2700 more.

Numerous other actions by Israel’s government since then have also prevented the resumption of negotiations:

b) Israeli reaction to the Fatah-Hamas accord: The Israeli government could have taken advantage of the April 2011 Fatah-Hamas accord to indirectly or directly engage Hamas—supported by many Palestinians during the most recent internationally supervised elections—in negotiations. Instead, Israel threatened to cut contact with the Palestinian Authority (PA) and renege on its Oslo Accord commitments if the PA did not sever relations with Hamas.  While such dogmatic position-taking may play well with the Israeli right, it strengthens the position of hardliners in both Fatah and Hamas.

c) Continued erection of the Wall: Israel has continued building the Wall. The Wall is not being built on the boundary between Israel and the Palestinian territories, as a wall intended for security-purposes might be. Instead, large segments of it jut deep into Palestinian territory, thereby de facto annexing the Palestinian land on the “Israeli” side of the Wall. The Wall separates West Bank Palestinians from their lands (their source of livelihood), and impedes their access to education, health care and natural resources, including water. Between the areas taken for the Wall and the colony-controlled areas east of the Wall and in the Jordan Valley, Palestinians are left with only 54 percent of the West Bank,[2] a fraction of their land under the 1947 UN Partition Plan.[3] Like colony-building, continued Israeli Wall-building contributes to the impasse.

d) Netanyahu’s belligerency during his May Washington visit: During his May 2011 Washington visit, Israeli PM Benjamin Netanyahu washed Israel’s hands of any responsibility to address the Palestinian refugee problem. He rejected the internationally-accepted concept that the pre-67 borders are the best basis for peace negotiations, dismissing them as “indefensible”, said that a long-term Israeli military presence along the Jordan River (the eastern edge of the West Bank) was “absolutely vital” and laid claim to all of Jerusalem as the future capital of Israel.

e) Continuation of Gaza blockade: Despite its June 2010 promises, Israel has not substantively eased its blockade of Gaza, as a recent study by 21 key international aid and human rights agencies has documented.[4] Netanyahu’s July 2011 strong-arming of protest-plagued and debt-ridden Greece into preventing the departure of an international Gaza aid flotilla from Greek waters is further evidence of his determination to continue the blockade—collective punishment of all Palestinians in Gaza—in defiance of international law.

f) Demand for recognition of Israel as a “Jewish state”: Netanyahu’s extremist-controlled coalition has introduced a problematic new pre-condition for resumption of negotiations: that Palestinian negotiators accept that Israel henceforth be defined as a “Jewish state.”[5] Doing so would enshrine second-class status for Christian and Muslim Israelis of Palestinian origin—20 percent of Israel’s population. It would also undermine Palestinian refugees’ rights, and ignore history: the land that Israel and the oPt together now encompass was, prior to partition, home to both Palestinians and Jews.  Thus, demanding this pre-condition essentially forces a “concession” from the Palestinians even before they step up to negotiations.

Who loses when negotiations founder?

Foremost the Palestinians.  The Palestinians in the oPt live under Israeli military occupation, Palestinian refugees live in statelessness and poverty in camps, and Palestinians in Israel itself face intense discrimination. However, Israelis—particularly those living in border communities periodically subjected to rocket-fire from militants in Gaza or Lebanon—also suffer, albeit to a lesser degree, from this delay. Moreover, implementing policies harming Palestinians—the occupation, the Wall, the “settlement enterprise,” the blockade of Gaza, etc.—drains the Israeli economy.

What is the US position on the impasse?

The Obama administration has been mildly critical of some of the Israeli conduct that has led to the impasse, e.g. periodically rebuking Israel for resuming colony-building in the occupied West Bank. However, it has not suspended its lavish military aid to Israel, nor even conditioned the aid’s continuation on an end to the occupation or colony-building. By announcing that the US will oppose the Palestinian bid for UN support in September 2011, Obama removed a strong incentive for Israel to negotiate in good faith with the Palestinians. The US thus entrenches the very impasse that it laments.

What is Canada’s position on the impasse?

Like the US, Canada is a net contributor to the impasse. Although a recent Canadian policy document makes frequent reference to international law, is also insists that the settlement of certain key issues must be “negotiated” between the Palestinians and Israelis. This ignores the likely outcome of such asymmetrical bilateral negotiations: no progress at all, or an agreement highly prejudicial against the weaker of the two parties—the Palestinians. The Harper government has also failed to take the steps recently taken by countries serious about promoting negotiations: i.e. unequivocally Israel’s colony-building and other violations of international law.  Officially, Canada supports “the creation of a sovereign, independent, viable, democratic and territorially contiguous Palestinian state, as part of a comprehensive, just and lasting peace settlement.”[6] However, the Harper government’s opposition to Palestinians’ bid at the UN contradicts that assertion.

How likely is a resumption of negotiations?

Resumption of negotiations is neither certain nor impossible. If it becomes clear that the majority of European states will back the Palestinian bid for support in the UN General Assembly, Israel’s government will be under pressure to halt the conduct that is preventing resumption of negotiations. Pressure within Israel for the governing coalition to modify its stances is growing:

According to August 1-3 media reports, Netanyahu is now willing to begin negotiations based on the pre-67 borders, but with a framework ensuring Israel's recognition as a “Jewish state”, Hamas’s exclusion from the talks, and that the final borders that will be different from pre-67 ones.[9]


[1] Article 49(6) of the Fourth Geneva Convention, ratified by Israel in 1951, states: “The Occupying Power shall not deport or transfer parts of its own civilian population into the territory it occupies.”

[3] The Palestinians have accepted the pre-1967 borders as the basis for peace negotiations, although doing so represents an enormous historical compromise: prior to 1947 they had lived all over most of historical Palestine, and the 1947 UN Partition Plan promised them far more land than encompassed by the  pre-67 borders.

[5] In a parallel move, members of Israel’s ruling coalition have also introduced a plethora of laws to silence and penalise public questioning of their new definition of Israel as a “Jewish state” or commemoration of the tragedy of Palestinians’  expulsion and dispossession when Israel was being established.

[7] New York Times, "Palestinian Factions Give Differing Views of Unity Pact," (Ethan Bronner) April 28, 2011. Halevy asserted, “There will be no serious progress in the Israeli-Palestinian conflict without some way of including Hamas in the process so as to transform them from being part of problem to being part of the solution.”