CJPME Factsheet 135, published August, 2011: This factsheet examines the response to the Passfield White Paper, a historic British statement of policy on Palestine from 1930. The White Paper was critical of Zionist organizations for meddling in the governance of Palestine. Then British Prime Minister Ramsay MacDonald issued his own statement in order to appease mounting Zionist criticism, this document would be known to Arabs as the “Black Letter.”

Factsheet Series No. 135, created: August 2011, Canadians for Justice and Peace in the Middle East
View factsheet in PDF format 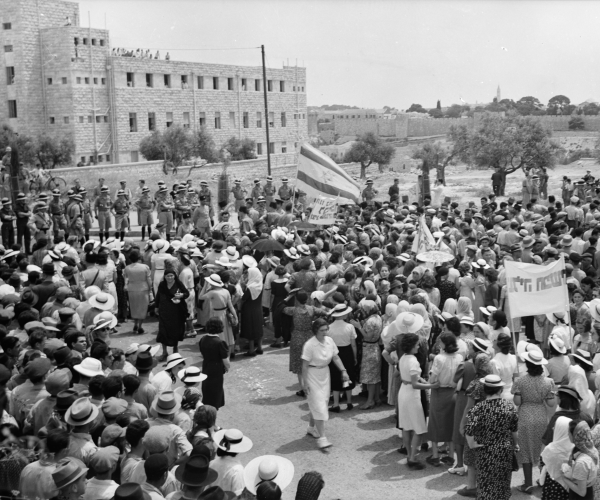 What is the Passfield White Paper?

In October 1930, the British Colonial Secretary, Lord Passfield (Sidney Webb), issued a formal statement of policy on Palestine on behalf of his Majesty’s Government (“HMG”), a document known as the Passfield White Paper.[1] At that time Britain had governed Palestine as a Mandate under the authority of the League of Nations since 1920. The White Paper restates British policy in relation to the governance of Palestine, emphasising in strong terms that, pursuant to Britain’s obligations under the Balfour Declaration, Arabs and Jews were to be treated equally. The White Paper proposed the establishment of a Legislative Council that would include representation from all communities, giving them all a say in the governance of Palestine.

The White Paper was critical of Zionist organizations for their policy of only employing Jewish labour, to the detriment of the Arab population; and for meddling in the governance of Palestine. It recommended that Jewish immigration be greatly reduced because there was not sufficient arable land, and because of high unemployment among the Arab community.

The White Paper presumed that Jews would remain a minority in Palestine, enjoying some measure of autonomy, and that only another few tens of thousands of immigrants (some of them Arabs) would be allowed to enter the country.

How did the Passfield White Paper come about?

In 1929 a series of riots and disturbances occurred in Palestine, which culminated in the death of 67 Jews in Hebron (435 others were protected by their neighbours).[2] Jews also committed atrocities against Arabs, “including the lynching of Arab passersby and the murder of women and children.”[3]

The violence had a number of causes. Arabs feared that the Jews had designs on the sanctity of the Haram. Continued Jewish immigration to Palestine (during the 1920s, over 100,000 Jews came to Palestine, doubling the size of their community[4]) and Arab fears that the Zionists intended to take their land were greater factors. Unemployment among the Arabs was also high and many believed this was because of Zionist labour practices that called for Jews to only employ Jewish labour. A Commission of Inquiry headed by Sir John Hope-Simpson agreed: “Motor transport, largely in the hands of the Jews, is driving the camel and the donkey off the roads, and with them the Arab cameldriver and the Arab donkeyman. The motor car, again largely owned and driven by Jews, is displacing the horsedrawn vehicle and its Arab driver. The increased use of cement, reinforced concrete and silicate brick, all manufactured by Jews, is replacing dressed stone for constructional purposes, and so displacing a large number of stonedressers and stonemasons, nearly all of whom are Arabs. The Arab quarrymen are also being displaced.”[5]

Another Commission of Inquiry headed by Sir Wallace Shaw[6] recommended:

The High Commissioner to Palestine, John Chancellor, said the Arab majority had to be given a measure of self government. He also proposed restricting the right of Jews to purchase land and making sure that immigration numbers were appropriate to the country’s economic capacity to absorb them.[7] His recommendations, with those from the Hope-Simpson and Shaw Inquiries, led to the restatement of policy in the Passfield White Paper.

What was the reaction to the Passfield White Paper?

The Arabs were pleased. There was an immediate and vociferous storm of criticism, however, from “world Jewry”, led by Chaim Weizmann, who said Lord Passfield had betrayed them. [8]

None of the recommendations put forward in the White Paper ever became policy. As Tom Segev writes, the story is a remarkable one: “From the British point of view, linking immigration to the Arab as well as the Jewish economy and making a statement of equal support for Palestine’s Arabs was a logical move. The events of the summer of 1929 had made clear the costs of supporting Zionism. Yet within a few months the new policy had disappeared. The Zionists had won again.”[9]

Politicians from both the Labour government and the Conservative opposition condemned the White Paper. Former prime minister Stanley Baldwin, former foreign secretary Austen Chamberlain, and former colonial secretary Leopold Amery wrote a highly critical joint letter to the Times.[10] The letter concludes bitingly: “It is only too evident that the effect of the White Paper upon public opinion in American Jewry and elsewhere is to create a feeling of distrust in that British good faith which is the most precious asset of our foreign Imperial policy.”

Winston Churchill said the obligation of the British government, articulated in the Balfour Declaration, was not just to the Jewish and Arab inhabitants of Palestine, but to Jews wherever they might live to become part of a Jewish National Home in Palestine through immigration. No such promise had been made to Arabs.[11]

In a lengthy parliamentary debate on 17th November 1930, scorn was heaped on the White Paper by former prime minister David Lloyd-George. Reading the speeches of those speaking for the White Paper - principally Prime Minister Ramsay MacDonald and Under-Secretary of State for the Colonies, Drummond Shiels - it can be seen that the government was on the back foot, defensive, and trying to “explain” the findings of the White Paper in a way that would appease its critics.

Lloyd George called the White Paper antisemitic and said its authors wished to see the Balfour Declaration and the British Mandate overturned. He opposed restraints on Jewish immigration to Palestine, and turned the complaint of the Arabs concerning the exclusive use of Jewish labour by Jewish employers and organizations on its head, justifying the policy thus: “They are extraordinarily anxious that the Jew with his capital behind him should not be tempted to become an effendi and exploit cheap Arab labour, of which there is plenty, in a way which is discreditable to the country—that the Jew should not come there with capital in his pocket, exploit cheap Arab labour and reap the profit. So they say you must not be allowed to do that.” Lloyd George said it was the Zionists’ capital and if the government wanted them to invest in Palestine it could not dictate terms.

How did the MacDonald Letter result?

Ramsay MacDonald capitulated. On February 13, 1931 he wrote a letter to Dr. Weizmann providing an “authoritative interpretation” of the White Paper.[12] The letter, known to the Arabs as the “Black Letter”, disavows any intention in the White Paper to make “injurious allegations against the Jewish people and Jewish labour organizations”. “It is recognized,” said MacDonald, “that the Jewish Agency have all along given willing cooperation in carrying out the policy of the mandate and that the constructive work done by the Jewish people in Palestine has had beneficial effects on the development and well-being of the country as a whole. [HMG] also recognizes the value of the services of labour and trades union organizations in Palestine, to which they desire to give every encouragement.”

There was “an obligation to facilitate Jewish immigration and to encourage close settlement by Jews on the land … and it can be fulfilled without prejudice to the rights and position of other sections of the population of Palestine.” There was to be no prohibition on Jewish purchase of land; no stoppage or prohibition of Jewish immigration in any of its categories, and no challenge to the right of the Jewish Agency to prescribe that only Jewish labour shall be employed by Jewish organizations.

Why did the British government cave?

A number of reasons probably played a part. The 1929 Stock Market crash was one element.[13] Governments were not anxious to run afoul of international Jewish business and investment interests. Budget concerns also played a role: the British Chancellor Philip Snowden (also friend of Weizmann), was opposed to spending the millions on Palestine recommended by the White Paper.[14] Pressure is also said to have been applied by the Americans. Whatever the reasons, the MacDonald Letter quashed the White Paper and Jewish immigration to Palestine increased to levels well in excess of what Weizmann had hoped for.[15]

[4] Segev, p225. During the period of the British Mandate, 1920-1945, the Jewish population of Palestine grew from one sixth of the whole to almost one third. See CJPME Factsheet No.7, Demographics of Historic Palestine Prior to 1948.

[15] In 1929, 5249 Jews immigrated to Palestine. By 1933 that number had increased to 37,337. Source: Jewish Virtual Library (http://www.jewishvirtuallibrary.org/jsource/History/mandate.html)