CJPME Factsheet 139, published October, 2011: This factsheet examines the significance of the Tunisian elections in 2011, coming out of the Arab Spring.  The elections came just months after a revolution sparked by several months of protests triggered by the self-immolition of a Tunisian merchant by the name of Mohamed Bouazizi.

Factsheet Series No. 193, created: October 2011, Canadians for Justice and Peace in the Middle East
View factsheet in PDF format 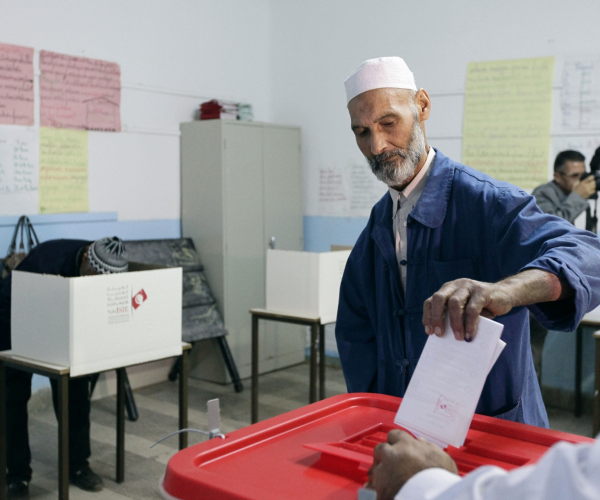 Who won the Tunisian elections?

Official results for Tunisia's first democratic elections were released on October 27, 2011, after the polls officially opened on October 23. It was estimated that 90 percent of the 4.1 million registered voters had participated.[1] With the results announced by Tunisia’s elections ministry (ISIE, translated as The Higher Independent Body for Elections), the moderate Islamist party Ennahda claimed victory, gaining the most seats with 90 of the 217-seat Constituent Assembly.[2] Nevertheless, Ennahda’s win does not constitute a majority government as it won less than half of the seats in the proportionally-allocated body. [3]

Second in line with 30 seats was the Congress Party for the Republic (CPR), while third place went to the Ettakatol party with 21 seats.[4] Talks are in progress regarding a coalition among the top three parties in order to present a more balanced approach between Islamist and secularist policies.[5] [6] [7]

While the Progressive Democratic Party (PDP) had some strong showings prior to voting with the support of 16 percent of probable voters,[8] it admitted defeat two days after results started coming in.[9] The party still garnered enough seats to place fifth, with 17 members elected.[10] Just ahead of the PDP with 19 seats[11] was Al Aridha Chaabia (also known as the Popular Petition for Freedom, Justice, and Development). While the Popular Petition has not stated whether it would be interested in joining coalition talks, the PDP has ruled out any possibility of being involved.[12] The rest of the 40 seats went to various other lists and parties, including many independent candidates.[13]

Why are the Tunisian elections important?

The Tunisian elections open an important new chapter in Tunisian history. The elections come just months after a revolution which was sparked by several months of protests that began in December, 2010 – triggered by the self-immolition of a merchant by the name of Mohamed Bouazizi. Bouazizi's act inspired Tunisians to take to the streets and call for an end to the regime and its oppressive policies. Because of the resulting protests, president Zine El Abidine Ben Ali fled the country, along with his family, in Jan., 2011. Ben Ali and his wife were subsequently sentenced in absentia to thirty-five years in prison for corruption and property fraud.[14] Even after most of the regime had been ousted, prime minister Mohamed Ghannouchi held onto his role until protesters forced him to leave in February.[15] An interim government was formed soon thereafter, and it was announced that elections would take place in October in order to choose a Constituent Assembly.[16]

The elections mark the beginning of the democratic process in Tunisia, and the first of its kind among the countries that carried the revolutionary wave across the Middle East and North Africa. Tunisia had long been denied this democratic freedom. Under Ben Ali's rule, most parties – other than his own – were banned.[17] Members of other parties, like Ennahda, were oppressed, exiled, imprisoned and even tortured.[18]

The newly-elected Constituent Assembly will be responsible for the rewriting of Tunisia's constitution, the choosing the new interim government, as well as setting dates for new parliamentary and presidential elections.[19] The last written constitution of 1959 defined Tunisia as a Muslim state, although it limited the role of religion in politics and law.[20] The Assembly will thus be responsible for determining what role religion will have in Tunisia's newly formed political and legal systems. It has up to a year to fulfil its duties.[21]

The elections also mark a possible new era for the rights of women in Tunisia. Early on in the democratic process, a gender parity law was introduced as a means “to ensure women would have a voice in the constituent assembly”.[22] There is promise of more equality for Tunisian women, especially with respect to employment opportunities.[23] While some women fear that the victory of an Islamist party will do more to suppress than empower them;[24] only time will tell whether or not these new policies will translate into strengthening the rights of women in Tunisia. As protests continue in other countries across the Arab world, Tunisia could become a signpost for other nations beginning the electoral process.

Who are the major political parties and what are their policies?

Ennahda was the favoured party in opinion polls prior to the election, with a 25 percent response.[25] Led by the formerly exiled Rachid Ghannouchi, it is a party that “supports democracy, pluralism and, to some extent, working with the West”.[26] Although some are sceptical as to its ideologies due to its Islamist nature, Ennahda has stressed its support for equal rights among men and women, as well as its opposition to the imposition of oppressive policies towards women.[27]

The CPR is considered a centre-left secularist party, led by physician and human rights activist Moncef Marzouki. It strives for civil liberties such as abolishing political police, lifting censorship, and ensuring the freedoms as laid out by the Universal Declaration of Human Rights.[28] Among other centre-left and secular parties are the PDP, led by Ahmed Najib Chebbi and Maya Jribi, and Ettakatol, led by Mustafa Ben Jaafar. Both support equal rights among men and women. While the PDP's main platforms are to increase the minimum salary and ease regulations on foreign investment; Ettakatol emphasises government transparency and the issue of corruption.[29] The party that surprised everyone with its sudden increase in popularity during the election is Aridha Chaabia (Popular Petition), led by Mohamed Hechmi Hamdi. It advocates universal health care, unemployment benefits, taxing large corporations, and offering “charity boxes” for those who are unjustly treated.[30]

How has the world reacted?

Tunisia has been praised by the international community in the handling of its first democratic elections. The US and EU expressed pleasure with the peaceful manner in which the elections were undertaken; with US President Barack Obama stating that this was “an important step forward” for the nation.[31] German Chancellor Angela Merkel congratulated the country's efforts in its first free and fair democratic elections, and offered Germany's support in the democratic transition while urging the newly formed Constituent Assembly “to be guided by the principles of democracy, pluralism, respect for human rights and the rule of law”.[32] France's Minister of Foreign Affairs, Allain Juppe, applauded Tunisia's smooth election process, while French president Nicolas Sarkozy said that France would “be vigilant” about the respect of human rights and democracy in Tunisia.[33]

Al Jazeera correspondent Anne Wolf said, “Tunisia may be about to prove to everybody that democratic transition in the Arab world is not just desirable, but feasible and imminent”.[34]