CJPME Factsheet 141, published November, 2011: Palestine’s admittance into UNESCO was a significant event, with parties both supportive and standing in opposition.  This factsheets lays out the reasons why Palestine sought membership in UNESCO, as well as how the international community, including Canada, responded.

Factsheet Series No. 141, created: November 2011, Canadians for Justice and Peace in the Middle East
View factsheet in PDF format 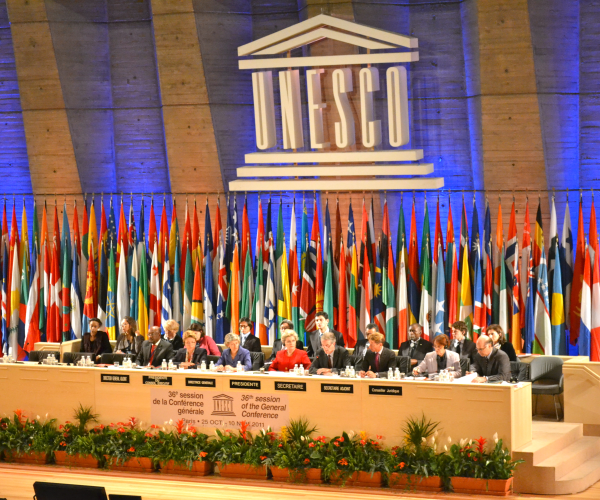 Since its inception, the United Nations Educational, Scientific and Cultural Organization (UNESCO) has been intimately linked to international efforts to prevent war and promote peace. It was founded on November 16, 1945 —shortly after the end of WWII — by 37 of the 44 members of the UN who had gathered for that purpose November 1-16 in London, England.[1] They aspired to create an organization that would embody a genuine culture of peace, establish the “intellectual and moral solidarity of mankind” and, in so doing, prevent the outbreak of another world war. The UNESCO constitution came into force November 4, 1946, after ratification by 20 countries, including Canada.[2] [3] UNESCO currently has 195 members, including Palestine, admitted October 31, 2011.

UNESCO’s mission is to “contribute to the building of peace, the eradication of poverty, sustainable development and intercultural dialogue through education, the sciences, culture, communication and information.” [4] UNESCO provides funding for a wide range of educational, scientific and cultural programmes and activities, many of which are carried out in developing countries. Its work is financed through the dues and voluntary contributions of UNESCO members.

The UNESCO General Conference — the assembly of all UNESCO members — determines the organization’s policies and main lines of work and sets UNESCO’s programmes and budget. It meets every two years.  It also elects the Members of the Executive Board and appoints, every four years, the Director-General. The 58-member Executive Board, which meets twice a year, is responsible for UNESCO’s overall management and ensures that the General Conference’s decisions are carried out. Admission of new members to UNESCO requires the approval of two-thirds of UNESCO’s General Conference members.

How did Palestine become a full member of UNESCO?

On October 31, 2011, UNESCO’s General Conference voted to admit Palestine as a full member. The resolution to admit Palestine passed by a vote of 107 to 14, with 52 abstentions. The US, Canada, Israel, Sweden, the Netherlands and Germany were among those who voted against,[5] while France, Norway, China, Russia, Brazil, South Africa, India and 100 other nations voted in favour. The UK, Italy, Japan, Mexico and 48 other nations abstained.

How did the US and Canada respond to UNESCO’s decision to admit Palestine?

Hours after Palestine’s admission, the US, as anticipated, announced cancellation of its UNESCO funding, in accordance with US laws passed in 1990 and 1994. International media reported that US President Barack Obama was personally reluctant to cut funding for UNESCO, but knew he would be unable to get the laws obliging the cut rescinded. US funding was $80 million a year, $60 million of which was due in November 2011. The US contribution constituted 22 percent of UNESCO’s total current budget.

Canadian Foreign Minister John Baird also immediately criticised the General Conference decision to admit Palestine, and later announced that Canada would halt its voluntary contributions to UNESCO, although it would continue contributing core funding, currently $10 million per year. Baird also indicated that Canada would not consider increasing its contribution to make up for the shortfall caused by US withdrawal of funding .

Why do Palestinians consider membership in UNESCO significant?

There are several reasons why the Palestinians consider UNESCO membership significant:

Belonging to UNESCO advances Palestine’s status at the UN, a multilateral institution, and allows the Palestinians to challenge some of the constraints they face as the weaker partner in their asymmetrical relationship with Israel, the world’s fourth largest military power.[6] UN membership will reduce Palestinians’ vulnerability to Israel’s unilateral actions.

UNESCO membership will allow Palestinian authorities to apply for UNESCO designation of the Old City of Bethlehem as a “World Heritage Site.”  It will also be in a stronger position to press for moral support and concrete measures from UNESCO and its member states to protect the Old City of Jerusalem and its walls—designated a World Heritage Site since 1982—from Israel’s ongoing attempts to appropriate various places there for its exclusive use.  Many sites within East Jerusalem are holy to Muslims, Jews and Christians, or all three, and have particularly deep significance for Palestinian Christians and Muslims. Moreover, the population of East Jerusalem—which has been militarily occupied since 1967—is predominantly Palestinian, despite decades of Israeli efforts to transfer its civilians to East Jerusalem in violation of international law.

Israel has attempted to stake a claim on all of Jerusalem as the “undivided capital of Israel,” despite the fact that the international community does not recognize Israel’s de facto annexation of East Jerusalem since 1967 and, on the contrary, anticipates that East Jerusalem will be the capital of the long-postponed Palestinian state.

As a UNESCO member, Palestine will be able to request and use UNESCO funding to protect its heritage sites.  It will also be able to request UNESCO members’ moral, financial and logistical support in its efforts to press Israel to return Palestinian antiquities stolen by Israeli troops during the 1967 war or removed later by Israeli authorities taking advantage of Israel’s military occupation of East Jerusalem and the West Bank since that year.

Does UNESCO play a role in mitigating the impact of the Israeli-Palestinian conflict?

Yes. UNESCO — a neutral international body — has occasionally taken stances on Israeli actions that have damaged Palestinian heritage sites. In 1974 Israel was stripped of its UNESCO membership over damage done by Israel's archaeological excavations on the TempleMount—the site of Al-Aqsa Mosque. (UNESCO renewed Israel's membership in 1977, after the US threatened to withhold $40 million of funding.)

In February 2010, Israel designated the Tomb of the Patriarchs (Hebron) and Rachel's Tomb (Bethlehem) as Israeli National Heritage Sites, despite the fact that these sites lie in the West Bank, and not in Israel proper.  Israel announced plans for restoration work on these sites, provoking US criticism and Palestinian protests. The following October, UNESCO’s Executive Board expressed deep concern over ongoing Israeli excavations and archaeological works on the Al-Aqsa Mosque compound in the Old City of Jerusalem. The Board also declared the sites al-Haram al-Ibrahimi/Tomb of the Patriarchs and Bilal bin Rabah Mosque/Rachel’s Tomb “an integral part of the occupied PalestinianTerritories” and noted that any unilateral Israeli actions there would be considered violations of international law.

All of the major Canadian parties have long-standing policies in support of a two-state solution to the Israeli-Palestinian conflict. Canada is among the UN members that  have since 1949 repeatedly promised Palestinians an independent, sovereign state. Palestinian membership in the UN and its agencies, such as UNESCO, is thus long overdue.  Palestine admission into UNESCO reflects international frustration with Israel’s unwillingness to stop colony (a.k.a. “settlement”) expansion in the West Bank.  It also complements other international efforts to encourage resumption of direct bilateral peace negotiations between Israel and the Palestinians aimed at achieving a comprehensive and fair final agreement to establish the second of the two states.

In the eyes of the international community, reduction of Canadian support for UNESCO would 1) demonstrate that the current Canadian government prioritizes political support for Israel above all other concerns.  Such a change would also 2) download onto less affluent UNESCO members the burden of making up for the shortfall in UNESCO funding resulting from the US’s abrupt withdrawal of funding.


[1] The 1945 gathering was itself the outgrowth of efforts by European education ministers who had begun meeting in 1942 to plan the post-war reconstruction of their education systems.

[4] UNESCO. Introducing UNESCO: what we are. http://www.unesco.org/new/en/unesco/about-us/who-we-are/introducing-unesco/ Retrieved November 8, 2011.

[5] The other counties who voted against are Australia, Czech Republic, Lithuania, Palau, Panama, Samoa, Solomon Islands, , Vanuatu. For a full list of countries voting in favour, against or abstaining, see The Guardian. "How Unesco countries voted on Palestinian membership," November 1, 2011.

[6] For further details on why full membership in the UN is deemed by Palestinians to be important, see CJPME’s Factsheet Palestinian Statehood.