CJPME Factsheet 142, published November, 2011: For several years, the Russell Tribunal – named after British philosopher Bertrand Russell – toured several countries to examine Israel’s violations of international law.  This factsheet explores the establishment of the tribunal, and provides an overview of its findings.

The Russell Tribunal on Palestine

Factsheet Series No. 142, created: November 2011, Canadians for Justice and Peace in the Middle East
View factsheet in PDF format 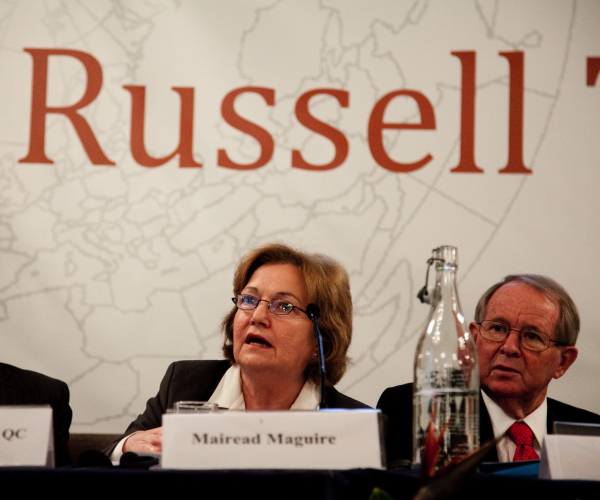 What is the Russell Tribunal on Palestine?

”May this tribunal prevent the crime of silence.” – Bertrand Russell, London, 13 November 1966

The Russell Tribunal was first introduced by well-known British philosopher Bertrand Russell in the 1960’s, as a public investigative body to examine the war crimes of the Vietnam War. This idea has since been revived as the Russell Tribunal on Palestine (RToP), as a means to examine Israel’s violations of international law.[1]

The RToP is composed of a large international group of concerned citizens that includes NGO’s, charities, unions and faith-based organizations.[2]  The RToP was formed in March of 2009 in response to a call for justice in Palestine by Ken Coates (Chairperson of the Bertrand Russell Peace Foundation), Nurit Peled (2001 recipient for Sakharov Prize for Freedom of Speech), and Leila Shahid (General Delegate of Palestine to the EU).[3]

Using international law as their legal frame of reference, the Tribunal aims to concentrate its efforts on the following, inter alia:[4]

The third and most recent hearing of the RToP was held in Cape Town, South Africa from November 5-7, 2011.  Working within the scope of the 1973 Apartheid Convention (as part of the Rome Statute of the International Criminal Court[5]), the Cape Town session questioned whether the practices in Israel and the Occupied Territories resembled those of apartheid.[6]  The Tribunal was then to decide what violations had been made, who was responsible for these violations, and to make recommendations on the legal ramifications and processes that should ensue.[7]

In addition to the Cape Town session, there were two other sessions that took place in Barcelona and London in 2010. Like the Cape Town Session, both meetings heard testimony in relation to their mandate and took actions in making recommendations in accordance with international law.

The Barcelona session’s aim was to consider the involvement (or lack thereof) of the EU and its member states in the ongoing occupation of the Palestinian territories by Israel, as well as the perpetuation of Israel’s violations of international law. It heard testimony related to the EU-Israel Association Agreement, the self-determination of the Palestinian people, the Israeli blockade and invasion of Gaza, the illegal settlements, and the Wall, among other things. In London, the session examined international corporations involved in Israel’s violations of international law and war crimes. To this end, the session also sought ways in which the States and international organizations associated with these corporations could be held accountable for their actions.

The next RToP is tentatively scheduled to be held in the United States in 2012.

Who are the jury members?

The jury members will vary from one RToP session to another.  The jury members for the Cape Town Session comprised a panel of 10 prominent human rights activists and professionals, including the following individuals:

The jury was responsible for hearing several testimonies of expert witnesses who had evidence of Israel’s apartheid practices and violations of international law.[8]

What was the outcome of the RToP Cape Town session?*

After two days of hearings, the RToP in South Africa found Israel guilty of the practice of apartheid as defined under international law.[9] Further to this, it was declared that Israel had committed crimes against humanity in the form of persecution, involving “the intentional and severe deprivation of fundamental rights of the members of an identifiable group in the context of a widespread and systematic attack against a civilian population”.[10] Illicit practices identified by the RToP ranged from the Israeli blockade and attack on Gaza, to the destruction of homes due to increased Israeli colonization, construction of the Wall, and forcible evacuation of Bedouin villages in the Negev region.  In light of the evidence presented, the RToP  was forced to conclude that Israel was guilty of crimes that violate international law.[11]

The Tribunal has called upon Israel to end its apartheid practices and its policies of persecution, and to pay compensation to the affected Palestinians for the damage it has caused them.[12] The Tribunal has also called on the international community to cooperate in bringing Israel to justice through pressuring the Israeli government, as well as urging the Prosecutor of the International Criminal Court to investigate the crimes being committed by Israel in the Occupied Territories and Israel proper.[13]

More broadly, the outcome of the RToP, in Cape Town like previous cities, is understood as a means to educate public opinion and to put postivie pressure on decision-makers.[14]

What has been the response?

Richard Goldstone (author of the Goldstone Report a.k.a the UN Fact Finding Mission on the Gaza Conflict) condemned the Cape Town session even before it began, stating that the Tribunal was merely an “assault” on Israel that aimed “to isolate, demonize, and delegitimize” it.[15] He also said that it is unfair and inaccurate to compare the policies of Israel to that of apartheid South Africa.[16]

But despite the differences of the regimes of apartheid versus that of occupation, in practice they are very similar. Both apartheid and occupation can be characterized by discrimination, repression, and territorial fragmentation (land seizures and expropriation).[17] John Dugard, having lived in South Africa under apartheid and spent time in Palestine/Israel, concluded that, “Israel's practices in the OPT do resemble those of apartheid. Although there are differences, these differences are outweighed by the similarities”.[18]

Author and activist Richard Falk believes that justice and sustainable peace will come about through the many forms of Palestinian resistance and global solidarity – to which the Russell Tribunal has committed to making a notable contribution.[19]

[7] Tutu, Desmond and Mansfield, Michael. “The Russell Tribunal on Palestine can promote peace, truth, and reconciliation.” The Guardian. November 3, 2011.