CJPME Factsheet 146, published March, 2012: Dead Sea products are Israeli cosmetics made using resources extracted from the Dead Sea, often extracted illegally from Palestinian lands.  These products are also closely linked to the commercial viability of Israel’s colonies (a.k.a. “settlements”), and are targeted as part of the boycott of Israel.

Factsheet Series No. 146, created: March 2012, Canadians for Justice and Peace in the Middle East
View factsheet in PDF format 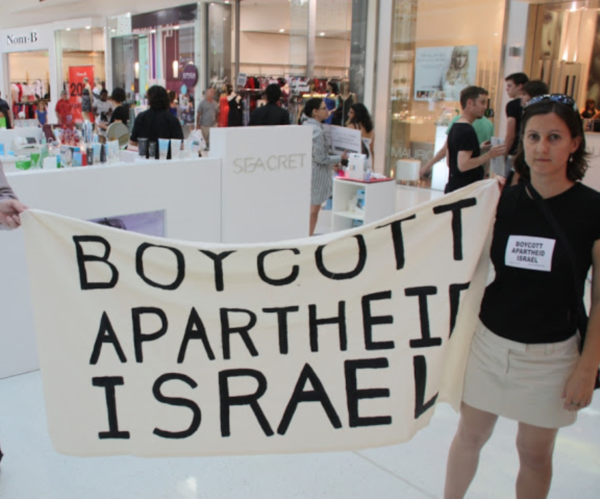 What are Dead Sea products?

Dead Sea products are cosmetics made using resources extracted from the Dead Sea. The Dead Sea is a salt lake which borders Jordan to the east, and Israel and the West Bank to the west. Products from the Dead Sea come in the form of mud, salts and lotions and are renowned for their relaxing and beautifying effects. Israeli companies based in the Dead Sea region of the Jordan Rift Valley extract and manufacture the products, which are then sold in spas and stores throughout the world.

How do the production and sale of Dead Sea products further Israel’s occupation of Palestinian territory?

By bolstering the Israeli colonies and the Israeli economy in general, the manufacturing of Dead Sea products provides a significant incentive to the Israeli State to continue its occupation of Palestinian territories and its “settlement enterprise” — the illegal establishment of Jewish-only colonies on Palestinian land.  As of November 2009, about 500,000 Israelis live in more than 100 illegal colonies built on Palestinian territory in the West Bank and East Jerusalem.[ii] The expansion of colonies is the result of a concerted Israeli government effort to settle its own civilian population on Palestinian land, in order to consolidate its control of the Occupied Territories. International law — specifically the Fourth Geneva Convention (art. 49, p. 6) — prohibits the transfer by occupying powers of their own civilians to the territory occupied. [iii]  Thus Israel’s establishment of the Jewish-only colonies in the oPt is a clear-cut violation of international law. Furthermore, the continuing establishment of Jewish-only colonies on Palestinian land significantly hinders the possibility of achieving a “comprehensive just and lasting peace deal in the Middle East,” as asserted in UN Security Council Resolution 446.[iv]

The number of Israeli colonies along the Dead Sea is rapidly increasing. As of November 2010, Israel had 35 illegal colonies in the Jordan Rift valley, and claims jurisdiction over 90 percent of it.[v]

By bolstering Israel’s illegal colonies and the Israeli economy in general (see section above), the manufacturing of Dead Sea products provides an incentive for Israel to continue occupying and illegally colonising Palestinian territory.

2. The extraction of resources from an occupied territory by the occupying power violates other provisions of international law

By enabling Israel’s illegal colonization of Palestinian territory, and by benefiting from it, companies involved in Dead Sea extraction are violating Article 3(Section C) of the UN Norms on the Responsibilities of Transnational Corporations and Other Business Enterprises (2003). The norms state that “business enterprises shall not engage in nor benefit from war crimes, crimes against humanity … other violations of humanitarian law and other international crimes against the human person as defined by international law, in particular human rights and humanitarian law.”[vi] Furthermore, the extraction of resources from occupied territory is a violation of United Nations General Assembly Resolutions 3005 and 3336 and the Fourth Geneva Convention (Art. 33, p.2), all of which forbid an occupying power from exploiting the natural resources of an occupied nation or territory.[vii]

3. Israeli authorities are denying Palestinians access to the Dead Sea, although it is located in Palestinian territory

4. Israeli authorities are denying Palestinians living in the vicinity of the Dead Sea access to fresh water

Israel controls and exploits the water in the Jordan Rift Valley. Already, Israeli settlers in the Jordan Valley consume far more water per capita than the Palestinians living in the West Bank, and their daily household consumption is three times that of families living inside Israel itself. Some Palestinian communities in the Jordan Valley consume less than 40 per cent of the minimum level recommended by the World Health Organization.[xi] Refusing to buy Dead Sea products is an appropriate way to signal one’s disagreement with Israel’s water policies.

5. Israeli authorities and companies are misrepresenting the origins of Dead Sea products

Although all Dead Sea products made by the companies being boycotted are labelled “made in Israel,” most are likely sourced directly or indirectly through illegal Israeli colonies on Palestinian land. That most Israeli companies refuse to release the exact location of their factories makes this evident. As well, Israeli chemical plants extract minerals like potassium chloride and bromine from the water taken from the northern part of the Dead Sea through a canal. So, even if the products are sometimes processed and packaged in Israel, they are fundamentally resources illegally extracted from the part of the Dead Sea in occupied Palestinian territory.[xii] The conduct of these companies is not transparent, posing problems for Canadian citizens and taxpayers. Labelling products made on occupied land or from the resources of that occupied land as “Israeli products” allows these companies to avoid Canadian import taxes and duty fees through the Canada-Israel Free Trade Agreement (CIFTA). (The Canadian government does not consider the West Bank to be part of Israel, but rather, occupied Palestinian territory.)  Additionally, the misleading labelling prevents Canadian consumers from making well-informed ethical consumer choices.

When should the boycott of Dead Sea Products end?

The boycott should end either 1) as soon as the Israeli companies cited in this factsheet stop extracting resources illegally from the West Bank, or 2) when Israel ends its occupation of Palestinian territory, and commercial activities in the West Bank can be regulated by Palestinian authorities.

[i] It is important to note that none of the companies selling Dead Sea products in Canada are Palestinian-owned.  This is not because Israeli entrepreneurs are stepping into a gap that Palestinian entrepreneurs can’t be bothered to fill. Rather, the conditions of life and commerce under Israeli occupation in the West Bank prevent Palestinians from taking advantage of their own natural resources.

[vi] “Norms on the responsibilities of transnational corporations and other business enterprises with regard to human rights.” U.N. Economic and Social Council, Section E, 26 August 2003.

[ix] “Restriction of Movement: Splitting the West Bank.” B'Tselem - The IsraeliInformationCenter for Human Rights in the Occupied Territories.