CJPME Factsheet 150, published April, 2012: This document provides a timeline of events, from February 2011, until April 2012, showing the gradual unravelling of civil stability in Syria, and the onset of civil war.

Key Events in the Syrian Crisis

Factsheet Series No. 150, created: April 2013, Canadians for Justice and Peace in the Middle East
View factsheet in PDF format 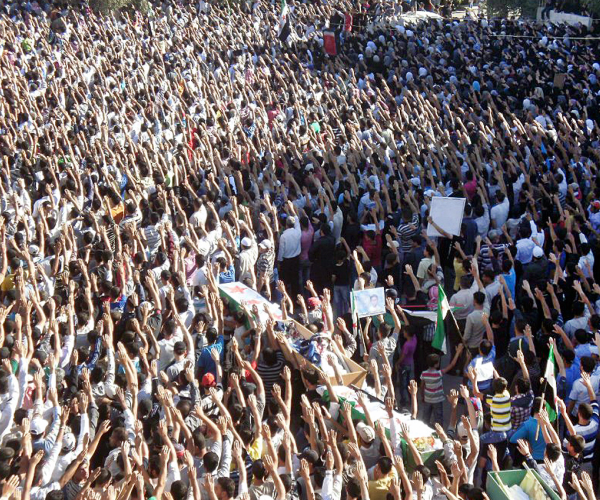 February, 2011.  Protests begin modestly: In old Damascus on February 2, 15 people hold a vigil supporting Egyptian protesters, but are beaten and dispersed by about 20 men in civilian clothing while police look on. Police later summon activists, warning them not to demonstrate. On February 17, in Damascus’s old market, 1500 spontaneously protest the police beating of a shop-keeper.  A lone MP proposes a review of the harsh Emergency Laws in effect since 1963; none of Syria’s other 249 MPs support him.

March, 2011.  Protests become massive:  On March 6, security forces arrest 14 boys under 15 in the southern city of Deraa for writing “the people want to overthrow the regime” on city walls. Public outrage ensues. Syrians hold "Day of Dignity" protest in Damascus demanding release of the thousands of political prisoners; 35 are arrested. At a "Day of Rage" rally in Deraa, security forces shoot five dead—the worst violence in Syria since 2004—triggering massive unrest. The government sends tanks into several cities to quell protests. The government announces wage increases for government employees and other reforms. Days later, Assad says only that the lifting of the laws will be “studied.” He also accuses protesters of being foreign conspirators or Israeli agents.

April, 2011.  Government offer of concessions, but continued suppression of protests: Turkish PM Recep Erdogan urges Assad to institute reforms. The government offers concessions to Sunnis and Kurds, passes a bill lifting the state of emergency, and other reforms. However, violent suppression of protests continues. On April 22, tens of thousands take to the streets and security forces open fire on them, killing an estimated 100. On April 25, government tanks roll into Deraa; over the next several days soldiers kill dozens, raid homes and arrest about 500. The US and others push for international sanctions, but Russia and China refuse. On April 27, 237 Ba’ath Party members—including several MPs—resign to protest the violence. The government claims it is facing an Islamist uprising. Some soldiers reportedly refuse to fire on unarmed protesters; some are executed, others flee.

May, 2011.  More repression, international sanctions, 1100 dead: Army tanks enter Deraa, Baniyas, Homs and suburbs of Damascus to crush protests. The EU imposes an arms embargo. The US and EU tighten sanctions. On May 28 a video appears on YouTube showing a photo of the mutilated corpse of a 13-year-old boy who, according to relatives, was arrested a month earlier during an anti-government march. The photo provokes mass protests in Hama, Darayaa and, for the first time, Syria’s largest city, Aleppo. Syrian activists and rights organisations say over 1,100 people have been killed and thousands rounded up and tortured in the previous 10 weeks.

June, 2011.  Rise of armed opposition, more repression, Arab League condemnation: Human Rights Watch releases a chilling report June 1 documenting the killing of hundreds of unarmed civilians, torture and extrajudicial executions by government forces. Internet access in about two-thirds of Syria is temporarily cut June 3. Syrian forces kill dozens in Hama. The government says that 120 members of the security forces have been killed by "armed gangs" in the northwestern town of Jisr al-Shughour. Troops besiege the town; over 10,000 flee to Turkey. On June 14, the Arab League for the first time condemns the repression. On June 20, Assad pledges to start a "national dialogue" on reform. The government agrees to allow a group of 150 intellectuals to meet in Damascus to discuss ways to resolve the crisis. Estimates that 1350 have been killed by the government; the government claims that 500 security personnel have also been killed.

July, 2011.  More demonstrations, more repression, rise of the “Free Syrian Army”: After over 200,000 demonstrate in the northern province of Hama July 1, Assad sacks the Hama governor and sends troops to restore order, leaving scores dead. In the presence of the US and French ambassadors, an estimated half a million people demonstrate in Hama on July 8. The government offers to open a “dialogue,” but the opposition rejects it as a sham.  Over 1.1 million Syrians protest July 22. On July 29, an army colonel announces his defection and that of hundreds of other soldiers, and the formation of the “Free Syrian Army.”

August, 2011.  First Western calls for Assad to resign, formation of the Syrian National Council: On August 3, the UN Security Council for the first time condemns the crackdown.  The next day, Assad issues a decree allowing multiple parties and electoral reforms. On August 18, Canada, France, Germany, the UK and the US for the first time call on Assad to step down. The UN Human Rights Council votes to launch an investigation of Syria, despite objections by Russia and China. On August 23 in Istanbul, Syrian dissidents announce the formation of the Syrian National Council. Two days later, Iranian President Mahmoud Ahmadinejad expresses veiled criticism of the Assad regime for the first time.

September, 2011.  More repression, more armed opposition, 2700 suspected dead: The Hama Attorney General resigns, citing the brutality of the Assad regime, especially the alleged execution of 71 prisoners in the Hama central prison July 31. The Syrian Observatory for Human Rights says that 360 civilians and 113 security officers were killed in the crackdown during Ramadan in August. The EU bans Syrian oil imports. Forty more soldiers reportedly defect in Homs, refusing to fire on demonstrators. The Arab League Secretary General visits Damascus and announces “a deal has been reached for reforms.” Prominent clerics from Assad’s religious group, the Alawites, denounce the regime’s violence. UN officials estimate that pro-Assad forces have killed 2700. Clashes between troops loyal to Assad and deserters are reported.

December, 2011.  Arab League peace plan revived, Arab League monitors enter Syria, 5000 now suspected dead: Defections from army and intelligence services continue. The UN High Commissioner for Human Rights estimates that over 5,000 have been killed in the uprising. Syria agrees to let Arab League observers into the country. Suicide bombs outside security buildings in Damascus kill 44; the government claims Al Qaeda is responsible, but the opposition alleges that the government has staged the bombings to justify its crackdown to the Arab League observers. Clashes between army and defectors intensify. Thousands of protesters gather in Homs to greet Arab League monitors. Syrian state TV says over 700 detainees have been freed.  The largest ever anti-Assad demonstrations occur December 30, when over 6 million Syrians go to the streets across the country.

January, 2012.  Arab League mission suspended, more violence and repression: the UN Security Council continues to be deadlocked on whether to impose sanctions on Syria, with Russia and China opposed. A suicide bomber kills 26 in Damascus on January 6; the government vows an ''iron fist'' response. The Arab League suspends its monitoring mission because of worsening violence.

February, 2012.  More demonstrations, bombardment of Homs, 7500 suspected dead: Russia and China block a UN Security Council draft resolution on Syria. Syrians demonstrate in over 600 cities and towns in the most widespread protests of the uprising. On February 4, the government begins intense artillery bombardment of Homs and other cities, killing over 400. The UK recalls its ambassador. The US closes it embassy. The UN says over 7,500 people have died since the crackdown began. Russia backs the Arab League peace plan.

April, 2012.  Int’l funding and support for armed opposition, dithering on UN peace plan: “Friends of Syria”—a group of over 70 nations—pledge millions of dollars and telecommunications equipment for opposition forces. Canada offers $1 million for pro-democracy programmes, and $7.5 million for humanitarian aid. Saudi Arabia and other Gulf States create fund for Free Syrian Army and army defectors. Syria agrees to withdraw troops from cities and towns by April 12, as per UN–Arab League peace plan, but steps up military attacks in the meantime.