CJPME Factsheet 155, published May, 2012: In 2012, close to 2,000 Palestinian prisoners partook in an open-ended hunger strike in order to challenge their arbitrary administrative detention as well as the humiliating treatment and conditions to which they were subject to. Approximately 40 percent of Palestinian men in the occupied Palestinian territories have been jailed by Israeli authorities at least once in their lives. Palestinian prisoners are subject to detention without charge or trial, solitary confinement and isolation, prolonged denial of family visits, denial of medical treatment, as well as various forms of humiliation. Compounded by the fact that many of the prisoners are children, such arbitrary detention and inhumane treatment is an issue that resonates deeply with Palestinians.

Factsheet Series No. 155, created: May 2012, Canadians for Justice and Peace in the Middle East
View factsheet in PDF format 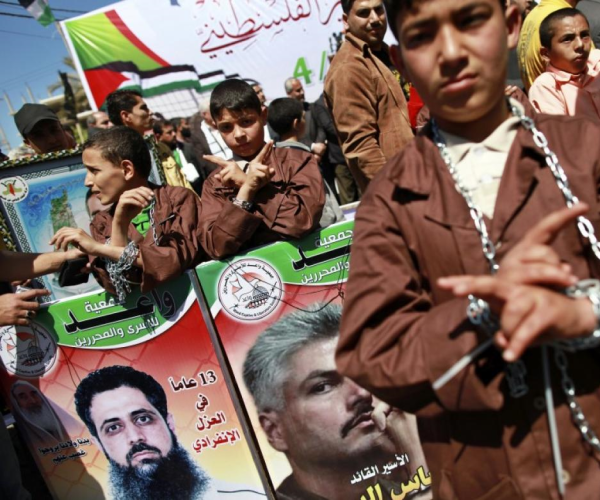 Are many Palestinian prisoners on hunger strike?

On April 17, 2012, approximately 1000 of the security detainees and prisoners of all political stripes initiated an “open-ended” hunger strike. Participation quickly grew.  Prisoners’ representatives say that as of early May, 2012, 2000 prisoners are participating. The Israeli Prison Service (IPS) places the number of participants at 1600. Two prisoners—Bilal Diab and Tha’er Halahleh—had initiated their hunger strike much earlier, on March 1. According to the International Committee of the Red Cross and Physicians for Human Rights – Israel, as of May 6-8, Diab (27) and Halahleh (34) were near death and the lives of several other hunger strikers were in danger.[1] [2]

Approximately 40 percent of Palestinian men in the occupied Palestinian territories have been jailed by the Israeli authorities at one time or another,[3] many for decades.  Prisoners’ detention and treatment is therefore an issue that resonates deeply with Palestinians.  According to IPS figures, at the end of April 2012 some 4,424 Palestinian security detainees and prisoners were being held in Israeli prisons, including 203 children.

What are the hunger strikers protesting?

Detention without charge or trial: The key issue triggering the strike is Israel’s practice of “administrative detention”— detention without charge or trial.  Israel often uses it not to punish someone for an offence already committed, but because the Israeli authorities believe someone is likely to commit an offence in the future. Over the years Israel has held thousands of Palestinians in jail without charge or trial, for periods ranging from several months to several years. Hundreds of them were children when first incarcerated. According to Israeli human rights group B’Tselem, although detainees are brought before a judge to authorize the detention order, most of the material submitted by the prosecution is classified and not shown to the detainee or his/her attorney. Since the detainees and their lawyers do not know the alleged evidence against them, they are unable to refute it. Although the maximum period of administrative detention is six months, it can be renewed indefinitely. In fact, of the administrative detainees held in December 2011, over 60 percent had their detention extended at least once beyond the first detention order.[4]

As of the end of March 2012, approximately 320 Palestinians were being held in administrative detention.  Halahleh and Diab—the two hunger strikers closest to death—have been held without charges for 22 months and 9 months respectively.

Prolonged denial of family visits:  Another trigger of the strike is the prison authorities’ frequent denial of family visits. Relatives must apply for a permit to visit incarcerated family members. Hundreds of families are refused permits altogether, based on undisclosed “security grounds.” Israeli authorities never provide justification for rejecting applications, apart from the standard phrase: “forbidden entry into Israel for security reasons.” Thousands of Palestinian prisoners serve their entire sentences without regular family visits. Mahmoud Issa, for example, has been allowed only one half-hour visit from a family member in 10 years of solitary confinement. In February 2012, an Israeli judge denied Issa’s request for a visit from his 75-year old mother, deeming it “a great potential risk to state security.” Relatives note that Issa and his mother would meet on either side of a glass wall and speak through a phone monitored by the prison guard.[8]

Other abuses: Strip searches, middle-of-the-night checks, denial of medical treatment and humiliation are among the other abuses provoking the hunger strike.

What are the alleged crimes of the hunger strikers?

Some of the hunger strikers have been accused and convicted by Israeli military courts of actions threatening the security of Israelis. In some cases, their actions would be illegal in any democracy. However, many prisoners have been charged with “offences” for peacefully protesting the occupation or Israel’s violations of international law, for example the construction of the colonies (a.k.a. “settlements”) or the “separation barrier.”[9]

Twenty-seven jailed Palestinian legislators —20 percent of the Palestinian Legislative Council (PLC)—are among those on the hunger strike. [10] Twenty-four of them have not been charged with any offence.

As well, many prisoners are serving lengthy sentences imposed by Israeli military courts for lesser offences, e.g. throwing stones at the occupying troops and tanks.

Many of the hunger strikers have not been accused of any offence, let alone convicted of one. (See details in “Detention without charge or trial” above.)

How have Israeli authorities responded?

Israeli prison authorities are imposing solitary confinement or isolation on many strikers, abruptly transferring them to other prisons, confiscating their personal effects and denying them visits by independent physicians and lawyers. On May 7, the Israeli Supreme Court rejected an appeal by Diab and Halahleh against their detention without charge or trial. The Court ruled that the prisoners’ interrogation had been negligent, but that they should nevertheless not be released because they were a security risk. Contradictorily, the Court also ruled that the authorities should consider releasing the two on medical grounds.[12]

How has the world responded?

On May 9, in response to protests at UN offices in the West Bank, UN Secretary General Ban Ki Moon said that “those detained must be charged and face trial with judicial guarantees, or released without delay.” [13] On May 10, Filippo Grandi, head of UNRWA (the United Nations agency tasked with assisting Palestinian refugees) echoed Ban, and noted that the prisoners’ demands were “generally related to basic prisoners’ rights as stipulated in the Geneva Conventions.”[14]

On May 8, EU missions in Jerusalem and Ramallah urged Israel to make available all necessary medical assistance and allow the hunger strikers to receive family visits.[15]

Thirty-five Irish deputies and senators of all political stripes, including two ministers of state, have urged the Israeli government to respect international law provisions restricting administrative detention to extreme cases, to end the practice of solitary confinement, and to allow prisoners family visits.[16]

As of May 10, 2012, the Canada’s Foreign Affairs Website had no mention of the hunger strike or its underlying causes.


[1] “Concern Mounts for the Lives of Prisoners on Protracted Hunger Strikes.” Physicians for Human Rights – Israel.

[2] “Lives of Palestinian detainees on hunger strike in danger.” International Committee of the Red Cross. May 8, 2012

[4] “Administrative detainees Bilal Diab and Thaer Halahlah are near death after 70 days of their hunger strike.” B’Tselem IsraeliInformationCenter for Human Rights in the Occupied Territories. May 7, 2012.

[5] For example, Bassem Tamimi, the leader of a West Bank village protest movement, was released on bail April 27, 2012, after over a year in prison, pending the May 13 pronouncement of the verdict in his military trial. Tamimi, recognised by the European Union as a human rights defender, had previously spent about three years in administrative detention. His home village, Nabi Saleh, has been the scene of weekly protests against the illegal expansion of a nearby Israeli colony (a.k.a. “settlement”) onto village land.

[9] “Separation barrier”: The high wall jutting deep into Palestinian territory, annexing Palestinian land onto the “Israeli” side of the wall.

[10] Following the internationally-supervised PLC elections of January 2006, Israeli occupation forces arrested dozens of political leaders, include eight Palestinian cabinet ministers and 26 PLC members. The majority of those detained were members of the winning “Change and Reform” block, which is believed to be pro-Hamas but also includes non-affiliated and non-Muslim members. Prior to and during the elections, Israel had raised no objections to the “Change and Reform” block running candidates. However, in February 2007, a year after the elections and after arresting the PLC members, Israel declared the Change and Reform Block illegal.

[11] “No Minor Matter: Violation of the Rights of Palestinian Minors Arrested by Israel on Suspicion of Stone-Throwing.” B’tselem. July 2011.