CJPME Factsheet 156, published July, 2012: Christians have been present in Palestine-Israel since the founding of the religion.  Nevertheless their numbers are dwindling for a number of reasons, most notably the systemic discrimination against them by Israel.

Factsheet Series No. 156, created: july 2012, Canadians for Justice and Peace in the Middle East
View factsheet in PDF format 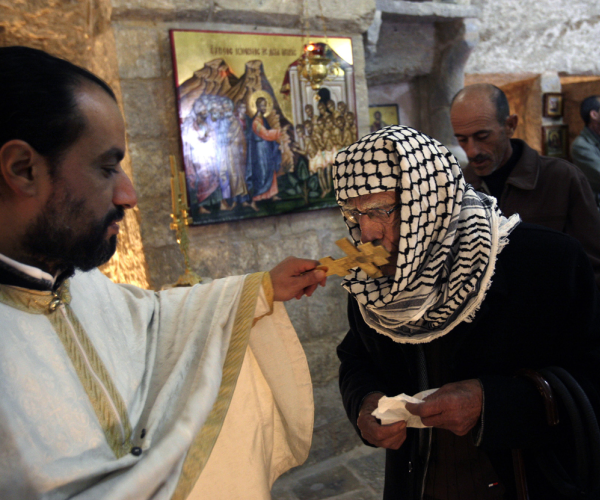 Who and where are the Palestinian Christians?

Many Christians from the global North do not associate Christianity with the Arab world. Yet Christianity has deep roots in the Middle East, particularly in the land of Palestine; Jesus was reputedly born in Bethlehem, a small town in the West Bank. Jerusalem, where he died, lies a few miles to the north. Today’s Palestinian Christians are by no means a homogeneous group; they belong to 15 different denominations, principally the Greek Orthodox and the Catholic Church.[1] Christians in Palestine and Israel make up 175,000 or 2.3 percent of the entire Arab and Jewish population.[2] Of the roughly 3.9 million Palestinians living in the West Bank and the Gaza Strip, Christians are  8.0[3] and 0.7 [4] percent, respectively, of the populations of those areas.  Of the 1.4 million Palestinians living inside Israel about 2 percent[5] are Christians. Palestinian Christians are concentrated primarily in urban centers: Jerusalem, Bethlehem, Beit Jala, Beit Sahour, Nazareth and Ramallah.[6] 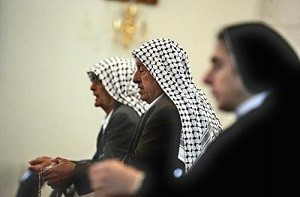 Presently, their numbers are low in comparison with those of their Muslim and Jewish neighbours.  Within Israel, the non-Christian Arab population has grown considerably in recent years.[7]  It is projected that by 2020, the Arab Christian population will shrink to 1.6 percent of the total population of Israel, while the Muslim population will grow to 19.34 percent.[8] The majority of Christian Palestinians now reside in emigrant enclaves in Canada, Chile, the US, Germany and Australia.[9]

How are relations between Christian and Muslim Palestinians?

Why is the Christian population in Israel-Palestine gradually declining?

There is no doubt that the Christian population of Palestine has been gradually declining for decades. This decline may be attributed to several factors, the most prominent of which is emigration. The out-migration began with the exodus—largely forced by Israeli troops—of nearly 726,000 Palestinians during the 1948 Arab-Israeli war. After the establishment of the Israeli state, Israel did not allow either Christians or Muslims to return to their homes.[11] Moreover, some 35 percent of the total Palestinian Christian population has emigrated since the Six Day War of June 1967,[12] most to pursue economic opportunities and studies elsewhere. In recent decades, particularly in the 1990s, the numbers of Christian emigrants from the West Bank and Gaza have increased considerably. The increasing  emigration is in response  to discrimination and harassment within Israel, the harsh military occupation of the West Bank and Gaza since 1967, the blockade of Gaza since 2007, and the long postponement of the establishment of a viable and sovereign Palestinian state where Palestinians, both Christian and Muslim, could feel at home. The emigration is particularly obvious in Bethlehem, Jerusalem and Ramallah.[13]

Some Israeli Jews, including Israel’s ambassador to the US Michael Oren, attribute the exodus of Palestinian Christians to “Muslim extremism.”[14] Palestinian Christians, however, blame the deteriorating economic and social conditions and the Israeli occupation, with its military checkpoints and separation wall.[15] According to the US State Department’s July-December 2010 International Religious Freedom Report, Palestinian church leaders also cite “the limited ability of Christian communities in the Jerusalem area to expand due to building restrictions, difficulties in obtaining Israeli visas and residency permits for Christian clergy, Israeli government family-reunification restrictions, and taxation problems as reasons for increased emigration.”

In an interview with CBS 60 Minutes, businessman Zaki Khouri, owner of the Coca Cola franchise for the West Bank, commented, “I probably have 12,000 customers here. I've never heard that someone is leaving because of Islamic persecution.”[16]

Some may wonder why Christians are the ones who are leaving Palestine, when all Palestinians are subjected to comparable discrimination and subjugation. While both Christians and Muslims may want to flee the difficult conditions, Christians usually have better contacts with people abroad and higher levels of education, which make it easier for them to leave.[17] This is due in part to Christian Palestinians’ access to the higher quality of education offered by schools funded by various foreign-based Christian denominations. Muslim Palestinians, in contrast, generally have access only to the underfunded public schools. As well, the better economic opportunities are in predominately Christian countries, which are often predisposed to welcome Christian immigrants over Muslim ones. And Muslim Palestinians may not be as attracted to moving to countries where they will be part of a minority.

Other reasons for the shrinking number of Palestinian Christians include lower birth rates than those of Muslims and Jews. In addition, intermarriage between Christians and Muslims generally results in an increase in the Muslim population; when Muslim men marry Christian women, under Islamic law their children are automatically classified as Muslim, while Muslim women are not allowed to marry non-Muslims.

What other challenges do Palestinian Christians face?

Palestinian Muslims and Christians share the same plight; they are both suffering due to the Israeli occupation. Indeed, all Palestinians refer to Israel's founding as the Catastrophe (Al Nakba), referring to Israel's expulsion of Palestinians and confiscation of Arab land[18].

Palestinian Christians have spoken for themselves collectively through a document published by Kairos Palestine, an ecumenical Christian organization.  They emphasize that  life in some parts of Israel-Palestine has become extremely difficult due to the Wall erected by Israel on Palestinian territory, transforming the land into  “small prisons” and separating the towns and villages from one another.[19] The document also notes  “the daily humiliation to which [Palestinians] are subjected at the military checkpoints, as [they] make [their] way to jobs, schools or hospitals,” and mentions that “Jerusalem and its holy places are out of bounds for many Christians and Muslims from the West Bank and the Gaza strip.”