CJPME Factsheet 157, published August, 2012: This factsheet discusses the way in which Israeli Jewish-only colonies (a.k.a. “settlements”) impede progress toward peace between Israelis and Palestinians.  The factsheet then outlines why and how “settlement” industries can be boycotted in Canada.

“Settlement” products and companies to boycott

Factsheet Series No. 157, created: August 2012, Canadians for Justice and Peace in the Middle East
View factsheet in PDF format 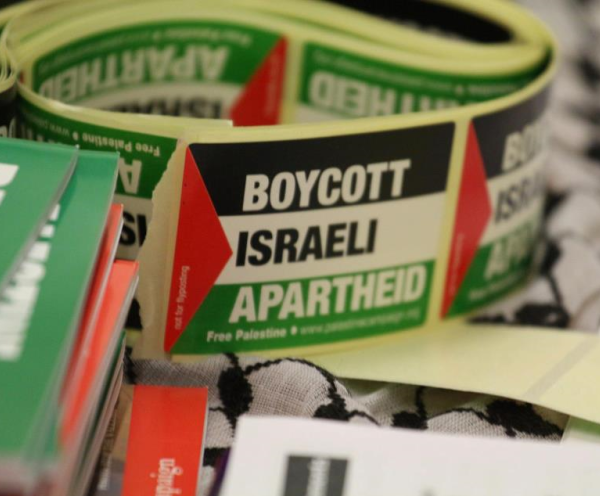 What are “settlements” and how do they impede peace between Palestinians and Jewish Israelis?

“Settlements” are Jewish-only colonies established by Israel in the West Bank (which includes East Jerusalem)  and thus beyond the internationally recognized borders of Israel (the borders in effect just prior to the June 1967 war). Currently, at least 500,000 Jewish Israeli colonists (“settlers”) are living in such colonies: 300,000 in the West Bank and at least 200,000 in East Jerusalem.[1] The Israeli military has helped Israeli settlers evict Palestinians from their homes and lands to clear the way for the settlements. As well, the settlers themselves — permitted to openly carry arms  — frequently shoot and beat Palestinians, and burn their homes, mosques and crops in order to intimidate them.[2]

Israel has also built a high concrete wall jutting deep into the West Bank.  The Wall snakes around the 120+ Jewish-only colonies, isolating Palestinian communities and de facto annexing the colonies to the “Israeli” side of the wall. Israel has also built a network of Jewish-only roads connecting the colonies to each other and to Israel. Palestinians are generally barred from the “settlements” as well as from the Jewish-only roads, Israeli-defined “security” zones,  and from the broad cordons around the settlements, the roads and the Wall. Close to 40 percent of the West Bank is thus now off-limits to most Palestinians, although the colonies as such occupy under 2 percent of the West Bank and East Jerusalem.

International law, specifically the Fourth Geneva Convention (art. 49, para. 6) prohibits an occupying power from transferring its own population to the territory it militarily occupies. Yet, ignoring international objections,[3] successive Israeli governments have provided financial subsidies and military protection to enable and encourage the migration to the colonies.  Israel’s colonial actions over more than four decades suggest that it aims to permanently control – and perhaps ultimately annex – the West Bank. As such, the continuing establishment of Jewish-only colonies on Palestinian land severely impedes the achievement of a “comprehensive just and lasting peace deal in the Middle East,” as asserted in UN Security Council Resolution 446.

Why should “settlement” products be boycotted?

Which particular “settlement” products are sold in Canada and by whom?

A few of the “settlement products” sold in Canada:

Dead Sea cosmetic products: AHAVA Dead Sea Laboratories Ltd. produces skin care products derived from minerals and resources from the Palestinian shores of the Dead Sea. They are based in the Dead Sea region in the Jordan Rift Valley in the Palestinian territories.[5] Their export revenue accounts for the majority of their profits.[6] Almost 45 percent of AHAVA is owned by Mitzpe Shalem and Kalia, two illegal Israeli colonies established near the Dead Sea shorelines of the West Bank.[7] AHAVA’s profits directly support these colonies and their residents. Another 18 percent of AHAVA is owned by Shamrock Holdings, a large holding firm further entangled in not only other illegal Israeli colonies but, also the construction of Israel’s Wall.[8][9] The mud and mineral resources used in AHAVA’s Dead Sea products are drawn from the Dead Sea shores in the oPt,[10] violating international law. Dead Sea Premier Cosmetics Laboratories, Mersea Dead Sea Cosmetics, Psoeasy Dead Sea Cosmetics, Intensive Spa, AVANI and wisa Beauty Canada Inc. also sell muds, salts and lotions based on minerals from the Dead Sea’s shores in the oPt. The Bay, Sephora, Pharmaplus, Pharmasave, Sears, Shoppers Drug Mart, Sabon, Edva Spa Products, Seacret and other stores sell these products.

Are other companies operating in Canada implicated in the “settlement enterprise”?

Yes. For example, Ikea delivers products to Jewish Israelis in West Bank settlements, although it does not deliver to Palestinians in the West Bank. This “normalizes” Israel’s illegal colonies on Palestinian territory.

As well, RE/MAX—an international real estate agency which is the largest one operating in Israel—has offices in the West Bank colonies of Ma'ale Adumim and Oranit, as well as in the French Hill, Ramot and Pisgat Ze'ev colonies in Occupied East Jerusalem.[12] RE/MAX is facilitating the sale of illegally-seized Palestinian property and enabling the Israeli government’s colonization of the oPt.[13]

Various other companies operating in Canada—such as Motorola, Hewlett-Packard, and Caterpillar—provide equipment to enable the establishment and expansion of the illegal settlements and the ongoing occupation that the settlement enterprise necessitates. They are directly involved in and profit from Israel’s occupation and illegal colonization of the oPt. Caterpillar, for example, provides the bull-dozers used to destroy Palestinians’ homes, uproot their olive groves and intimidate Palestinians and foreign peace activists who try to prevent the evictions.

[2] B’Tselem - The IsraeliInformationCenter for Human Rights in the Occupied Territories. “Press release: Video: settlers firing live ammunition at Palestinians in the presence of soldiers.” 20 May 2012. http://www.btselem.org/press_releases/20120520_asira_al_qibliya

[4] Environmental and labour standards are not enforced in the “settlements” when those potentially affected are Palestinian. Israeli government officials are not interested in enforcing them,  and the Palestinian Authority’s officials cannot, because they are denied access to the settlements.