Factsheet Series No. 158, created: August 2012, Canadians for Justice and Peace in the Middle East
View factsheet in PDF format 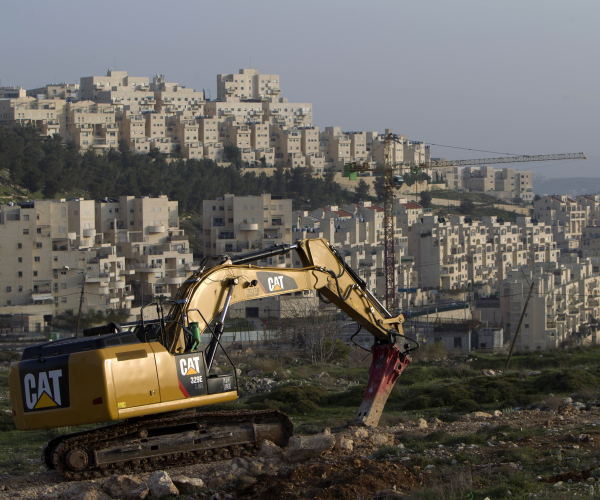 Yes, very significantly.  The following are examples of the scope and expression of this opposition:

The United Church of Canada (UCC): On August 17 2012, the 41st General Council of the United Church of Canada — the country’s second-largest Christian denomination — voted by a wide margin to call on Israel to dismantle the “settlements” and “the separation barrier in all sections where it crosses over the Green Line.” It also resolved to establish a church-wide campaign on “settlement products,” and to encourage UCC members to avoid any and all such products. [i] [ii]

Canadian Labour Congress (CLC): In May 2011, the 3-million-member CLC called for a ban of all goods produced and exported from the “settlements.” It also urged Canada’s government to exclude such goods from preferential tariff treatment under the Canada-Israel Free Trade Agreement. It urged Canadian companies to not profit from the occupation of Palestine and the siege on Gaza.

Canadian Union of Public Employees (CUPE) Ontario division: In May 2006, CUPE’s 200,000-member Ontario Division resolved to support a boycott of Israel until Israel
“recognizes the Palestinian right to self-determination.”  The decision was taken unanimously by the 896 members at the Ontario Division’s convention.[v]

Trade Union Congress, UK: In September 2009, Britain's 6.5-million-member TUC called for a boycott and sanctions campaign against Israel; it also called for a ban on goods originating from the “settlements” and an end to the EU’s preferential trade treatment of Israel.[vi]

The Methodist Church of Britain: On June 10 2010, the British Methodist Church’s governing body called on Methodists to support and engage with the boycott of Israeli goods emanating from illegal settlements.[vii]

The Swedish Trade Union Confederation (LO): On May 26 2012, the 1.5-million-member Confederation agreed to support the boycott of Israeli goods from the occupied territories. It also resolved to work to ensure that the capital over which it has control is not invested in Israeli securities and that employers cease doing business with companies that earn money from the illegal settlements. (As well, it announced support for Palestine’s admission to the UN and the lifting of the blockade against Gaza.)[viii]

South African dockworkers:  In February 2009, the South African Transport and Allied Workers Union (~47,000 members) announced it would refuse to unload all Israeli goods coming into the country's ports.[ix]

How else has mainstream society shown support for Palestinian human rights?

In many different ways, including the following: 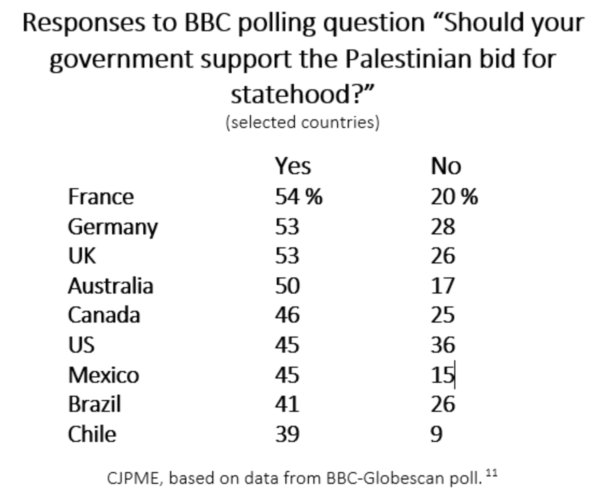 The above figures reveal that citizens are ahead of their governments in terms of their degree of support for a Palestinian state, despite Israel’s objections.  Full membership in the UN would put Palestinians and Israel on a more equal footing diplomatically.

Vigorous grassroots campaigns to oblige stores to not carry “settlement” products and/or Israeli products:  Some 12000 consumers signed a petition asking Migros, Switzerland’s largest retail chain, and COOP, then the second largest, to stop selling Israeli products until Israel respects international law.[xii] [xiii] Pressure from members of the Co-operative Group (Co-Op)—the UK's fifth biggest food retailer and its largest mutual business—led it to announce that it would no longer do business with companies exporting produce from illegal Israeli settlements.[xiv] [xv] Lobbying by Norwegian labour groups obliged VITA, a major retail chain with 160 stores throughout Norway, to halt the sale of all "products originating from settlements in occupied territories," in late March 2012.  VITA had been Norway’s main seller AHAVA Dead Sea products.[xvi]

Boycott support by consumer co-ops and community-based groups: In July 2012, the 15,000-member Olympia Food Co-op in Olympia, Washington, US, voted to boycott products from the “settlements” and Israel proper.[xvii] On November 3 2010, AMARC (the World Association of Community Radio Broadcasters)—an international organization with nearly 4,000 member organizations and associates in 130 countries—resolved to “comprehensively and consistently boycott all Israeli media institutions and products […] to end Israel's occupation, colonization and system of apartheid.[xviii]

Does opposition to Israeli settlements undermine Israel’s “right to exist”?

No. For example, the UK’s TUC,[xix] CUPE Ontario Division,[xx] and the UCC have each explicitly expressed support for the right of Israel to exist under a two-state solution. The UCC also mentions support for “the demographic integrity of Israel”[xxi] (i.e. its current Jewish:Arab ratio).

Why have mainstream perceptions shifted?

Mainstream public opinion has shifted due to:

a)      The sense that the conflict has gone on far too long, and that both sides – including the Palestinians – have legitimate grievances.

b)      A sense that Western-sponsored diplomacy will continue to be ineffective in the Israel-Palestine conflict.  This, plus a sense that domestic political forces in the West prevent the US and others from playing the role of a neutral intermediary.

d)      Frustrations over Israel’s intensification of colony‐building and the extension of its Wall. Figures from Israel's population registry released in July 2012 showed a 4.5 percent increase in Jewish settlers in the West Bank in the previous 12 months, a total that exceeds 350,000[xxii] (not including East Jerusalem) and which has almost doubled in the past 12 years.[xxiii]

[ii] It also recommended that divestment from companies involved in the occupation be considered. It asked the Canadian government to label settlement products uniquely and ensure that they not be given preferential treatment under the Canada–Israel Free Trade Agreement. It invited other Canadian churches to participate in the campaign

[vii] “Justice for Palestine and Israel.” MethodistChurch in Britain, June 30, 2010.

[xx] "Q&A - CUPE ONTARIO’S RESOLUTION 50: Towards peace and justice in the Middle East."

[xxii] This figure does not include the population of illegal Israeli “settlements” in East Jerusalem, conservatively estimated to be over 200,000.