CJPME Factsheet 161, published December, 2012: Following the show of unity between thousands of Sunni and Shia in Bahrain in February, 2011, the Bahraini government began a crackdown on dissidents.  This factsheet reviews the facts of this oppressive crackdown since that time, and Canada’s responsibility to address the repression.

Factsheet Series No. 161, created: December 2012, Canadians for Justice and Peace in the Middle East
View factsheet in PDF format 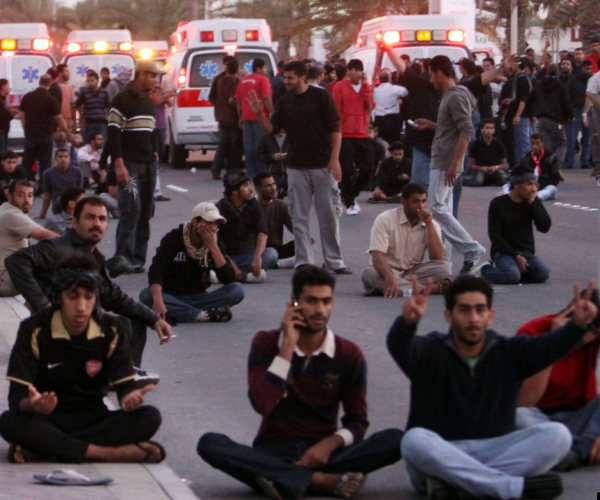 How did the Bahraini protests and the regime’s responses evolve in early 2011?

In an unprecedented show of unity, thousands of both Sunni and Shia Bahrainis gathered at the Pearl Roundabout in Manama, the capital, on February 14, 2011, to call for greater government accountability, an end to widespread corruption, and expanded political rights for all Bahrainis. (See CJPME Bahrain Factsheet for more information on protesters’ grievances.[i]) Bahraini authorities swiftly responded with a harsh crackdown, accusing protestors of being terrorists influenced by Iran and Hezbollah and of attempting to destabilise the country.  Bahraini security forces used disproportionate physical force, birdshot pellets, rubber bullets, tear gas and live ammunition against protesters, killing seven and wounding several others in the first few days.[ii]

On March 14, 2011, at the request of King Hamad bin Isa al-Khalifa, about 2000 Saudi and Emirati troops rolled into Manama to quell the unrest.[iii] The Gulf Cooperation Council (GCC) troops forced protestors off the streets through intimidation and physical force, killing dozens and injuring hundreds more. Thousands of people were rounded up – from the streets and even from hospitals – and taken to prisons; hundreds were tortured.[iv] The Saudi monarchs and the emirs of the UAE had their own motives for helping put down the Shia-led protests.[v]

On March 18, 2011 Manama’s historic Pearl Roundabout — locus of the protests— was demolished, allegedly to “improve traffic flow.”[vi] [vii] The King declared a state of emergency, including a curfew and a ban on public gatherings.[viii] Between March 15 and June 1, 2011, nearly 3,000 protesters and bystanders were arrested; hundreds were brought before military courts.[ix]According to Human Rights Watch, at least 40 people were killed during the protests, including four protesters who died in custody from torture or medical neglect, and several members of the security forces.[x]

Targeting of health care workers: The security forces attacked nurses and doctors who treated injured protesters and thus might be credible sources of information about the repression. On February 17, 2011 Bahraini police attacked a health services tent in the Pearl Roundabout, beating and arresting nurses and doctors as well as protesters. On March 16, 2011 security forces raided the Salmaniya Hospital, adjacent to the Roundabout, attacking injured protestors taking refuge in its parking lot and crammed hallways. GCC forces blocked off the hospital gates, preventing injured and dying protestors from receiving medical attention, and forbidding hospital staff to leave. Doctors and protestors were intimidated, interrogated and beaten in sections of the hospital itself.  In the following months, according to the US-based Physicians for Human Rights, the authorities conducted a systematic campaign of attacks and arrests against medical workers who treated injured protesters.[xi] At least 47 doctors and nurses were initially tried in military courts, after being denied access to lawyers and contact with family.[xii] After international outcry, retrials were ordered in October 2011,[xiii] but the courts ultimately upheld charges against nine.[xiv]

How has the Khalifa regime responded to criticism of its handling of the protests?

King Hamad established the Bahrain Independent Commission of Inquiry (BICI) to investigate the events that took place during the uprising and describe the security and human rights situation. The Commission’s very public November 2011 report turned out to be “an extraordinarily strong denouncement of the government for, among other things, at least 559 torture complaints and the deaths of at least 35 people [until that point] during the unrest.”[xv] The Commission also documented other human rights violations by Bahraini authorities in crushing peaceful pro-democracy protests and retaliating against protesters: sexual assaults, mass dismissals from employment, expulsions from universities, arbitrary arrests, attacks on medical staff, disproportionate use of violence against protestors, use of toxic tear gas, widespread denial of fair trials, trials of civilians in special military courts, and targeting and imprisonment of activists. It issued a long list of recommendations for the regime. The UN’s Universal Periodic Review also made recommendations, of which Bahrain’s Minister of State for human rights said the government accepted 143, rejected 20, and accepted 13 with conditions. [xvi] [xvii] [xviii]

Has the human rights situation improved in 2012?

Not substantively. According to a November 22, 2012 Human Rights Watch report, Bahraini authorities have failed to carry out most of the BICI’s recommendations.  Bahraini authorities have released some people who were wrongly detained in connection with and following the protests, reinstated many dismissed workers and students, and prosecuted a few, typically low-ranking, security personnel.  However, leading opposition activists sentenced to long prison terms, including life terms, after calling for political change remain behind bars, as do many others whose alleged crimes involved mostly peaceful street protests. No high-level officials have been prosecuted for the policies that led to widespread torture and unlawful killings. Courts have upheld convictions based on coerced confessions.[xix] Wealth and power continue to be concentrated in the Khalifa regime. Moreover, politically motivated arrests and prosecutions have continued. In August 2012, a Bahraini court sentenced Nabeel Rajab, president of the Bahrain Human Rights Centre, to three years in prison based solely on his participation in protests that authorities had not authorized. Abdulhadi al-Khawaja and Ali Abdulemam, two other high-profile human rights activists, are currently serving sentences of 10 years to life in prison.

In October 2012, the government banned all rallies and gatherings in the country.  In November, four Bahrainis were sentenced to prison for “tweets” that allegedly insulted the king, and the regime also revoked the citizenship of 31 Bahrainis that it alleges damaged state security—including two former MPs from al-Wefaq, the mainstream Shia opposition movement.[xx] [xxi] According to Bahraini human rights groups, up to 80 children between 15 and 17 years of age are currently in jail for participating in protests.[xxii] Two former leaders of the Bahraini teachers’ union are also in jail, and report that they were tortured and forced to sign false confessions.[xxiii]

Despite the repression, smaller demonstrations continue to take place, especially on Fridays, with calls for a greatly empowered parliament and an elected government. According to international media reports, unrest continues with clashes between protesters and police occurring almost daily. The regime appears to be tolerating protests in outlying Shia villages—where they are less visible—but preventing them in the capital. [xxiv]

Does Canada bear responsibility for the repression in Bahrain?

Yes. Although Canada condemned the regime’s use of violence and encouraged it to build “a sincere dialogue that addresses the concerns of the country’s citizens,”[xxv] it took no concrete steps to pressure for reform. Even when Canadian Naser Al-Raas was arrested in March 2011 and tortured for allegedly participating in the protests in Manama, Canada did little.  Al-Raas was released in February 2012, but remains critical of the lack of Canadian government support throughout his trial.[xxvi] In February, 2012, NDP MP Hélène Laverdière voiced concerns regarding the Bahraini security forces possible use of “weapons manufactured in Canada […], against civilians.”[xxvii] Saudi and Bahraini troops are indeed heavily armed with American and Canadian-manufactured weapons. Canada’s muted response to the Bahrain situation appears to be related to its trade agreements and UAE investments in the Alberta   petroleum sector.[xxviii]