CJPME Factsheet 165, published February, 2013: For years, Israel and the West have fretted about how to contain Iran’s potential nuclear ambitions.  This factsheet summarizes the threats – real and imagined – of Iran’s nuclear programs, and whether Israel’s and Canada’s worries are justified.  It also explores the legality of the Israel’s threat to pre-emptively destroy Iran’s nuclear installations.

Factsheet Series No. 165, created: February 2013, Canadians for Justice and Peace in the Middle East
View factsheet in PDF format 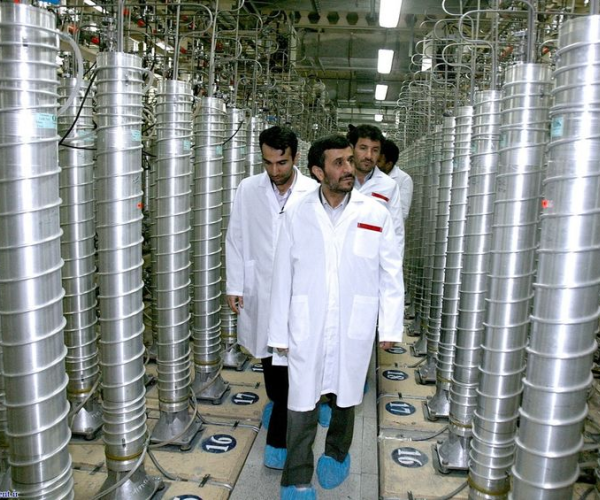 Where is the sabre rattling against Iran coming from?

Most of the rhetoric concerning Iran as a threat emanates from Israel. Israel and Iran had strong ties between 1948 and 1979, but started to grow further apart after the 1979 Iranian Revolution.  Iran’s regional prominence grew, and Iran-Israel relations continued to unravel with the removal of Saddam Hussein from Iraq and the defeat of the Taliban in Afghanistan. While Iran’s regional influence had grown in the 1990s, Israel did not perceive Iran as a threat to its security.  It was not until Iran began strengthening ties with non-state actors near Israel’s borders (such as Hamas and Hezbollah), that Israel began to see Iran as a threat to its dominance in the Middle East, at one point viewing Iran as the “source of every regional conflict” they faced.[i]

Over the past decade, volatile statements have been made by both Israeli and Iranian leaders, undermining the possibility of more congenial relations. However, Israeli leaders often exaggerate Iran’s remarks, seemingly in an effort to sensationalize Iran’s grievances against Israel (e.g. suggesting that Iran seeks to “dehumanize[s] Jews for the purpose of genocide.”[ii]) Israeli Prime Minister Benjamin Netanyahu has also sought to create an atmosphere of fear, encouraging the international community to take measures in order to pressure Iran to halt its nuclear program. This has led to the implementation of international economic sanctions, including Canadian sanctions[iii] (which have substantially weakened the Iranian economy.)[iv] Netanyahu applauded the additional set of economic sanctions imposed by Western powers in July 2012, but argued that these would not deter Iran from continuing forward with its nuclear program because their “medieval” ideologies and “radical Islam” precede their wish to survive.[v] Only two months later, at the 67th session of the United Nations General Assembly, Netanyahu claimed Iran was less than a year away from being able to complete enough uranium enrichment to make their first nuclear bomb, and pleaded for global action to prevent them from doing so.[vi]

Since at least the summer of 2010, Netanyahu has been calling for international support for a pre-emptive attack on Iran.  This, in order to irrevocably halt any Iranian nuclear development and to prevent Iran from becoming a regional nuclear power.

Is Iran really a threat?

Little international focus was given to Iran’s nuclear program until after Israel started beating the war drums.  For its part, Iran has always claimed that its nuclear program is meant only for civilian purposes (energy and medical research), and that its goal is to “becom[e] a technological beacon for the Islamic world,” insisting that “scientific progress is the right of all nations.”[vii]

Since 2005, when Mahmoud Ahmadinejad was elected president of Iran, there’s no doubt that the discourse and behaviour from Iran has been “gratuitously inflammatory.”[viii],[ix] In the search to become a powerful, influential regional power, Iran performs frequent military exercises, test-fires missiles, and announces emergency preparedness plans in the event of war.[x]

At the close of 2012, experts estimate that Iran’s uranium enrichment development is barely at 20 percent, and in order to make a nuclear weapon, this enrichment must be at least at 90 percent.[xi] Israel, on the other hand, is believed to possess “over 200 ready-to-launch warheads in its stockpile.”[xii] Iran receives no development aid from the US or Europe, and has been affected by international sanctions which have significantly weakened its economy.[xiii]

Additionally, Iran signed the Non-Proliferation Treaty (NPT) in 1968 and ratified it in 1970, making it subject to inspections by the International Atomic Energy Agency (IAEA). Israel, on the other hand, has been consistently ambiguous “with regards to its nuclear arsenal in order to avoid the political costs of being a declared nuclear state” since, as a non-signatory of the Non-Proliferation Treaty, its nuclear activities are not subject to international inspection.[xiv] Modern Iran has never invaded or threatened to invade any of its regional neighbours, so Israel’s attempts to convince the world that a) Iran is committed to developing nuclear weapons, and b) Iran is poised to use them, seem overblown.  So certainly, a military strike against Iran in “anticipatory self-defense” would seem highly unjustified.

Would a pre-emptive strike be legal?

No, it would not.  Article 51 of the United Nations Charter defines the legal right to self-defence as one which permits “the inherent right of individual or collective self-defence if an armed attack occurs against a Member of the United Nations.” In context, this right is extended only until the Security Council is able to “take measures necessary” to maintain peace.[xv]  It is also important to note that there is no international law which prevents countries from pursuing nuclear programs, whether civilian or military.  As such, any international military response to Iran must be based on a perceived threat to international security, and not simply out of fear of nuclear proliferation.

Given the apparent state of tension between Israel and Iran, Netanyahu and other conservative Israeli leaders argue that “self defence” would justify Israel’s launching of a pre-emptive strike against Iran.  However, legal experts generally insist that if anticipatory self-defence is to be considered, this entitlement to strike should only be considered “when the danger posed is instant, overwhelming, leaving no choice of means, and no moment for deliberation…”[xvi] Other considerations also factor in, for example, 1) what is the scope and reach of the threat, 2) how concrete is the threat? E.g. a) are there troop build-ups, b) are there detonations of nuclear devices? Justification for pre-emptive strikes should consider other factors too, like public announcements and postures, concrete intelligence information, and historical precedents on the part of the countries involved.

Since it is impossible to argue that Iran poses any imminent threat to Israel at this time, any discussion of pre-emptive strikes would appear highly pre-mature.  As such, at this time, international political leaders opposed to the idea of an Iranian nuclear program can only legally consider other options,  whether diplomacy, “constructive engagement,” sanctions, or other tools.

There is no question that Israel has overstepped the bounds of “self defence” in previous pre-emptive strikes.  In January 2013, Israel launched an airstrike against a target in Syria in the absence of any heightened tensions between the two countries.[xvii]  Israel’s strike on alleged Syrian nuclear facilities in September, 2007, and Iraq’s nuclear reactor at Osirik in 1981[xviii] are also examples of how Israel used such strikes illegally, given the above discussion.

No. Canada should remain impartial and need not take sides in the current tension between Israel and Iran. Canada currently has strong ties with Israel, and should try to establish a relation of “constructive engagement” with Iran.  Given its geography and its geo-political relations, Iran will be an important regional player with interests and important relationships in the Middle East[xix].

Unfortunately, rather than remaining impartial through the rising tensions, Canada has taken an antagonistic attitude towards Iran. In September 2012, to the surprise of many, Foreign Affairs Minister John Baird announced that Canada would close its embassy in Iran and expel Iranian diplomats from Canada within days.[xx] Such acts are usually reserved for times of declared war between countries.  In fact, Canada has not unilaterally cut diplomatic ties with another country since World War II. Canada has never cut diplomatic ties with North Korea since these were established in 2001[xxi] and Canada was even able to re-establish its diplomatic relations with Afghanistan only three months after the War in Afghanistan had begun.[xxii]  Taking sides in the Iran-Israel standoff simply aggravates the tension, and ensures thatCanada will play no role in its resolution.

[ii] “Critique of ‘The Danger of a Genocidal and Nuclear Iran.’” (2009, February 16). Analysis Assembled by Canadians for Justice and Peace in the Middle East. p. 6.

[xv] The Legal Right to Self-Defence. (2008, June). Factsheet Series No. 42. Canadians for Justice and Peace in the Middle East. Retrieved from:

[xvi] A quote from the proceedings of a famous legal case between the UK and the USA from 1843, known as the “Caroline Doctrine.”  During Security Council deliberations on the Osirik attack, the Caroline Doctrine was cited with approval by Iraq.