CJPME Factsheet 170, published April, 2013: Tawakkol Karman is a Yemeni political activist who, along with two female Liberian peace activists, won the Nobel Peace Prize in 2011.  This factsheet looks at her life leading up to, and following the awarding of the peace prize.

Factsheet Series No. 170, Created: April 2013, Canadians for Justice and Peace in the Middle East
View factsheet in PDF format 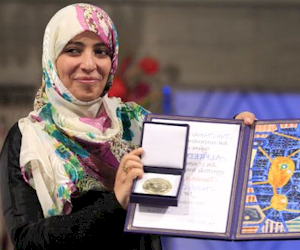 Who is Tawakkol Karman?

Tawakkol Karman is a Yemeni political activist who, along with two female Liberian peace activists, won the Nobel Peace Prize “for their non-violent struggle for the safety of women and for women’s rights to full participation in peace-building work.”[1] She is the first Arab woman, the second Muslim woman, and the youngest person to have received the prize.

In 2005, Karman, along with seven other female journalists, started Women Journalists Without Chains (WJWC). Seeking to promote human rights, and more specifically those of women across the Middle East[2], they tried to start a newspaper and a radio station linked to the organization. The Yemeni government denied them the necessary permits and Karman says that she has received threats from government officials. In 2007, WJWC released a document listing the abuses of press freedom that had taken place since 2005. Two years later, Karman criticized the Ministry of Information for persecuting journalists through trials.

What role did she play in the “Jasmine Revolution”?

When the Arab Spring, which Karman terms the “Jasmine Revolution,” started in Tunisia, Karman was already organizing demonstrations and sit-ins in Sana’a. She then simply redirected the goal of these demonstrations and demanded President Saleh’s resignation and respect for human rights.

In January 2011, Tawakkol Karman was arrested by Yemeni authorities. When her detention was reported by media outlets, protests erupted throughout the country, leading to her release 36 hours later.[4]

After her release, Karman continued to organise sit-ins and protests. During a protest on January 29, she called for a “day of rage” on February 3, saying she would not stop until Saleh left the presidency.

In a Time interview, she said she believed “the combination of a dictatorship, corruption, poverty, and unemployment has created this revolution.” She added, “it’s like a volcano. Injustice and corruption are exploding while opportunities for a good life are coming to an end.”[5]

Saleh finally stepped down at the end of 2011; his Vice President took over February 27, 2012 under an agreement between Saleh and the Gulf Cooperation Council (GCC). Although Karman fought for Saleh to not be given immunity, for his assets to be frozen, and for charges to be pressed against him, the GCC and US-backed transition plan provided him with immunity. This deal has been perceived by many as a deal between elites that fails to address Yemenis’ fundamental demands.[6]

Why has she been deemed controversial? 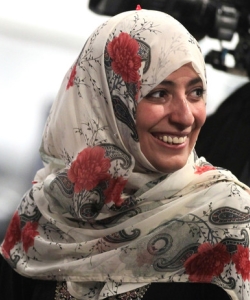 Karman has been perceived as controversial for various reasons. For one thing, her criticisms of the Saleh presidency and calling for his resignation led to her arrest in 2011.

As well, when protests intensified in 2011, Karman was a member of the al-Islah political party, the main opposition party in Yemen. Although she takes more moderate stances on most issues, many members of the al-Islah party are very conservative. One such conservative member is Abdul Majeed al-Zindani, head of the Yemeni Muslim Brotherhood. He is listed on the US Office of Foreign Assets Control’s Specially Designated Nationals List. This list is used by the US to prevent money from being transferred from charities or businesses to terrorist groups. Zindani has been linked to al-Qaeda through his association with Anwar al-Awlaki.

Furthermore, she has criticized both Saudi Arabia and the United States for supporting Saleh and not caring about the outcome for Yemenis.[7] The US failure to call for Saleh’s resignation was one of the key factors that led Karman to criticize its stances. In fact, the US seemed to accept at face value Saleh’s claim that without him Yemen would become a failed state, and Al Qaeda would then strengthen its presence in Yemen.

Why did Tawakkol Karman place such emphasis on press freedom?

Under President Saleh, Yemen functioned like a dictatorship. In fact, he was in power for 33 years. Although elections took place fairly regularly, they were characterized by voting irregularities and rigging.[8]

The Saleh government used legal harassment, detention, and prosecution to limit press freedom. The government owned all broadcast media, which presented only government views. Freedom House considered this to be a “significant limitation on access to information, given Yemen’s 60 percent illiteracy rate,”[9] that made Yemenis extremely dependant on broadcast media for news.

According to Freedom House, various laws passed under Saleh limited press freedom: journalists were prohibited from criticizing the president, “defaming individuals,” or “distorting” the image of the Yemeni culture.[10] Additionally, restrictive amendments to the Press and Publications Law and a “repressive bill designed to regulate media, including online publications”[11] were introduced in the parliament. Throughout 2011, journalists faced intimidation, threats, arrests, office raids and closures, and the seizure of printed publications. The Yemeni Journalists’ Syndicate (YJS) reported that that year more than 300 assaults on journalists had taken place – the highest annual number in the country’s history.[12]

Have Tawakkol Karman and other protesters won key freedoms?

As noted by Human Rights Watch, the situation following Saleh’s resignation is mixed:

Freedom of expression, association and peaceful assembly improved significantly in 2012. However, scores of journalists were attacked or harassed by individuals or armed groups from across the political spectrum.

Al-Ayyam, an influential Aden-based newspaper, has been closed since an assault by government forces in 2010. Criminal cases that the former government brought against it remained pending.

The authorities continued to prosecute journalists on politically motivated charges in a specialized media court that failed to meet international standards of due process.

Abdulelah Haidar Shae of Saba news agency remained in prison on terrorism charges, despite having received a pardon from then-President Saleh in February 2011. Yemeni and international media reported that US President Barack Obama requested Shae’s continued detention. The specialized media court in January 2011 sentenced Shae to a five-year term after a trial marked by procedural irregularities. Shae had alleged that the Yemeni and US governments had committed abuses in their fight against al Qaeda.

Furthermore, there have been reports of journalists killed or even sentenced for reporting on corruption as late as April 2013.[14]

It should also be noted that Saleh has not left the country and continues to exercise political influence in Yemeni society. In fact, he has purchased his own TV station, giving him a powerful instrument to shape Yemen’s political future to his liking. According to Karman and many others, this is a clear attempt by Saleh to meddle in Yemen’s politics and prevent major changes. [15] [16] [17]

[3] Al-Sakkaf, Nadia. “Renowned activist and press freedom advocate Tawakul Karman to the Yemen Times: A day will come when all human rights violators pay ‘for what they did to Yemen.’” Womenpress. 22 Apr. 2013.; “Tawakkol Karman and  Women Journalists Without Chains.” National Endowment for Democracy. 22 Apr. 2013.

[7] On June 18th 2011, Karman wrote an op-ed in the New York Times criticizing the US and Saudi Arabia for their position with regards to Yemen (Karman, Tawakkol. “Yemen’s Unfinished Revolution.” The New York Times, 18 June 2011.