CJPME Factsheet 171, published June, 2013: This factsheet addresses the phenomenon of Israeli “pinkwashing”: the promotion of Israel’s gay-friendly culture as a cover for human rights violations against Palestinians.  The factsheet takes a closer look at true Israeli attitudes towards the LGBT community, and the different forms that pinkwashing takes.

Factsheet Series No. 171, created: June 2013, Canadians for Justice and Peace in the Middle East
View factsheet in PDF format 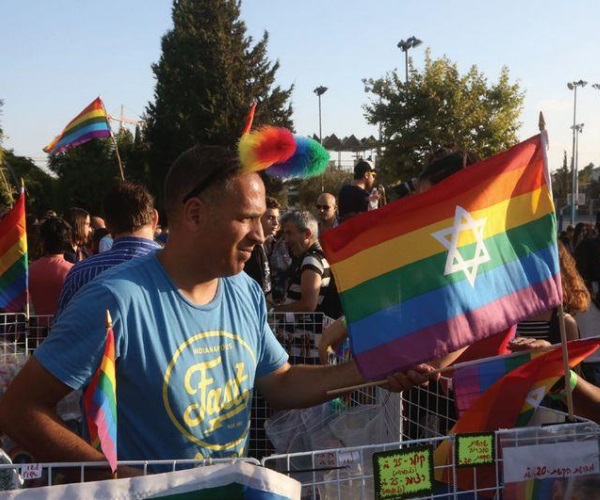 “Pinkwashing” is the instrumentalisation by Israel and its supporters of the rights of lesbian, gay, bisexual and transgender (LGBT) Israelis in order to deflect international attention to Israel’s ongoing violation of Palestinians’ human rights. Through pinkwashing, Israel tries to promote its “openness” to the LGBT community as typifying Israeli democracy, while hiding the truth about its occupation of the Palestinian territories. The term “pinkwashing” has been used by LGBT groups that denounce this public relations tactic used by Israel.[1]

Since 2005, the Israeli state has been trying to improve its image abroad, by conducting a marketing campaign called ”Brand Israel.” The initiative notably incorporates a gay-friendly component through which Israel hopes to project and promote an image as a modern, progressive and democratic state. In 2010, the Tel Aviv tourism council invested US$ 90 million to encourage the LGBT community to travel there.[2] In presenting itself as a destination of choice for the LGBT community, Israel is camouflaging its occupation of the Palestinian territories.[3]

To some extent, yes, but on closer examination, it is clear that its track record on this issue is mixed. On one hand, it is true that Israel has adopted policies favouring respect for LGBT people’s rights. For example, it allows adoption by same-sex couples[4] and forbids discrimination based on sexual orientation in the workplace or army.[5] The Israeli state also recognizes civil marriages between people of the same sex that have taken place overseas, although it does not allow same-sex marriages within Israel itself. [6]

Other laws that discriminate based on gender and race blemish this portrait of “progressiveness” and undermine the rights of the LGBT community. For example, one law prohibits the granting of Israeli nationality to a Palestinian married to an Israeli.[7] Although Israeli laws affecting the LGBT community are more progressive than those of other Middle East countries, they remain inadequate. Moreover, the fact that a state assures a certain degree of protection of LGBT people’s rights cannot constitute the only criteria by which its degree of “progressiveness” can be determined. In the case of Israel, these laws are unfortunately cherry-picked for emphasis in order to obscure the violation of the rights of another segment of the Israeli population—Israeli citizens of Palestinian ethnicity—as well as Israel’s occupation of the Palestinian territories.

What forms does pinkwashing take?

Another example is the use of social networks as a marketing tool by non-governmental organisations. The group Queer Support for Israel regularly posts on Facebook photos and videos publicising the Israeli LGBT community’s rights while portraying the Palestinian people and Arab countries as backward and homophobic societies.[9] The Zionist organization Stand With Us posts online brochures portraying the Palestinians as a repressive people precisely when it comes to gay people’s rights.[10]

These forms of pinkwashing are common and completely ignore the existence of LGBT organisations in the occupied Palestinian territories, such as Aswat[11], Al Qaws[12] and Palestinian Queers for Boycott, Divestment and Sanctions.[13] These Palestinian organizations are very active on the ground, working to sensitise their fellow Palestinians about the difficulties faced by LGBT people, as well as the promotion of their inherent rights.

Pinkwashing can also manifest itself in the discourse of high-ranking Israeli leaders. For example, Israeli Prime Minister Benjamin Netanyahu declared before the American Congress, “Israel has always embraced this path [of liberty] in a Middle East that has long rejected it. In a region where women are stoned, gays are hanged, Christians are persecuted, Israel stands out. It is different.”[14] Yet again, this discourse attempts to portray Israel in an exaggeratedly favourable light by contrasting it with the rest of the Middle East, described in a categorically negative manner.

What is pinkwashing’s underlying discourse and how can it be countered?

The discourse underlying pinkwashing is generally that of portraying the reality of Israel’s LGBT community as being admirable when compared with that of its peers in Arab countries. By representing the Arab states as homophobic and backwards, pinkwashing facilitates justification of the apartheid practiced against the Palestinian people, who are supposed to embrace the Israeli model.[15] Not only does the pinkwashing strategy used by the Israeli state place inordinate emphasis on the rights acquired by Jewish Israeli LGBT people, while denigrating the progress made elsewhere in the region, it also fails to mention the influence of conservative or homophobic currents within Israeli society itself.

Opposing pinkwashing takes the concrete form of the boycott, divestment and sanctions (BDS) against Israel. This is a means of legitimate pressure, endorsed by over 170 Palestinian civil society organizations. This strategy was proposed by the Palestinians in 2005 and is notably defended by the group Palestinian Queers for Boycott, Divestment and Sanctions.[16] CJPME’s campaign encourages individuals and organisations to pressure the Israeli government to end the occupation of the Palestinian territories. Interested citizens can visit CJPME’s webpage (www.cjpme.org) to find supplementary tools.

Another way for Canadians to oppose pinkwashing is to join a group like Queers Against Israeli Apartheid (QuAIA)[17] or to participate in the online campaign Pinkwatching Israel.[18]

What is the group Queers Against Israeli Apartheid (QuAIA) and what are its demands?

QuAIA is an LGBT non-governmental organisation founded in Toronto to challenge Israeli apartheid and pinkwashing.[19] QuAIA’s objectives are education, dialogue and activism from a queer, anti-colonial, anti-racist and feminist perspective.[20] Although many groups in other cities have been inspired by QuAIA, the organisation does not have  branches in Canada or overseas.

After the Israel lobby put pressure on Toronto gay Pride Week sponsors and Toronto City Council, there was an attempt to ban QuAIA from the Toronto Pride Parade in 2010. This move was soon defeated after Pride Week organisers faced a strong community response supporting QuAIA’s right to march. [21] [22] In 2011, the Toronto City manager reported to Council that QuAIA was not in violation of any law or City policy. In 2012, Pride Toronto’s dispute resolution panel dismissed a complaint by B’nai Brith aimed at preventing QuAIA from marching in that year’s parade. In 2013, QuAIA, with support from CJPME and other groups, again countered an attempt to force Pride organisers to exclude QuAIA from the Pride Parade or lose its customary city funding for Pride Week. As of June 2013, the pro-Israel lobby is still attempting to wedge into the City of Toronto’s Anti-Discrimination Policy wording that would inhibit sharp criticism of Israel in city-funded spaces or events and promote marginalisation of QuAIA and other groups critical of Israel’s conduct.[23]


[1] “Who We Are”. Queers Against Israeli Apartheid. Online. http://queersagainstapartheid.org/. Webpage consulted April 10, 2013.

[17] “Who We Are”. Queers Against Israeli Apartheid. Online. http://queersagainstapartheid.org/. Webpage consulted April 10, 2013.

[23] For further information on these issues  and CJPME’s deputations to Toronto City Council in 2013, see the CJPME press release “CJPME, allies speak out against proposed censorship in Toronto,” May 29, 2013.