CJPME Factsheet 172, published June, 2013: This factsheet looks at the Israeli company Sodastream, and the reasons it should be a target in the Boycott Israel campaign.  Notably, the factsheet looks at Sodastream’s business practices and installations in the light of international law to make a compelling case for a boycott

Factsheet Series No. 172, created: June 2013, Canadians for Justice and Peace in the Middle East
View factsheet in PDF format 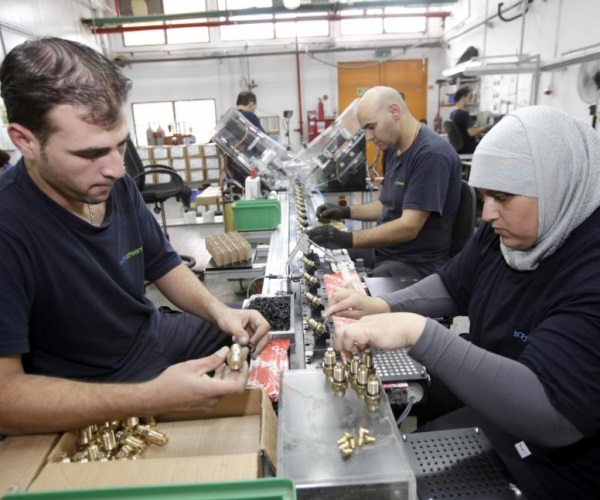 SodaStream International is a leader in the development, manufacture and marketing of carbonation products intended for home use. Its main products are drink makers, flavoured syrups, carbonators and bottles. SodaStream products are used by 6 million households in 45 countries.[1] Its main factory is located in the Mishor Edomim industrial park, 10 minutes from Jerusalem, in the occupied Palestinian Territories.[2][3] In March 2013, retailers selling SodaStream in Canada include, among others, The Bay, Linen Chest, Canadian Tire, Walmart, Sears, London Drugs and Amazon.ca.

How does the production and sale of SodaStream products encourage Israel’s occupation of the Palestinian territories?

Since SodaStream’s principle factory is situated adjacent to Ma’ale Adumim – an illegal Israeli “settlement” – it contributes to Israel’s economic development and thus to its ongoing occupation of part of the Palestinian territories. At the end of 2012, SodaStream’s revenues were US$ 436 million.[4] SodaStream also contributes to Israel’s occupation of the Palestinian territories by providing a living for Israeli colonists.[5]

Ma’ale Adumim, the colony attached to Mishor Edomin industrial park, is one of the largest Israeli colonies in the West Bank, with a population of 39,000. In 2012 alone, the Israeli government approved building permits for another 6676 housing units.[6] The municipal taxes paid by SodaStream contribute to the development of the illegal colony of Ma’ale Adumim.[7] It should be noted that the payments to the colony by the businesses in its industrial park are currently used to build highways and finance education for the Israeli population.

Ma’ale Adumim’s expansion is not only a very real current problem, it is also a substantial bone of contention in any negotiation between the Palestinians and Israelis. Given that the colony is located very close to East Jerusalem, its expansion eastward and in Area E-1 would have the effect of cutting the northern part of the West Bank off from the southern part. Such a situation would undermine a two-state solution, by dismembering the West Bank and eliminating any territorial contiguity. Moreover, such expansion would limit Palestinians’ freedom of movement between East Jerusalem and the rest of the West Bank. The construction of a highway for Palestinian use bypassing the Jewish colony seems unlikely given the significant costs involved.[8]

SodaStream production in Misho Edomim contributes to the economy and development of the Israeli colony adjacent to it, Ma’ale Adumim (see section above). The company pays taxes to the Israeli government—rather than to the Palestinian Authority—and the profits benefit the Israeli economy rather than the Palestinian economy. The choice of location is not coincidental. By installing itself in the occupied Palestinian territories, SodaStream benefits from lower real estate rental charges, tax reductions and less strict environmental and labour laws than in Israel.[9]

By hiring West Bank Palestinians, including East Jerusalemites, SodaStream profits from low-cost labour. Although, in theory, Israeli labour norms apply equally to Palestinian workers, in practice, they are not fully implemented. Given the difficult economic situation in the Palestinian territories, many Palestinians have no other option than to work in the colonies in order to provide for their families. However, their work contributes to the creation of wealth within the Israeli colonies more than within the Palestinian economy.[10]

Moreover, Palestinians have very limited opportunities to exercise their rights within colony workplaces. In order to obtain work in a colony, they must provide a security certificate detailing their record according to Israeli authorities. Any disagreement with an employer, current or previous, is noted in their file and can make it difficult to obtain the security certificate required to work elsewhere inside a colony. Consequently, the Palestinians hesitate to demand that their rights in colony workplaces be respected.[11]

As well, as documented by the non-governmental organization Kav LaOved, between 2008 and 2010, Palestinian employees were subjected to difficult working conditions and found themselves constantly vulnerable to firing.[12]

On its packaging, SodaStream uses the address of its offices in Israel instead of the address of its factories in the occupied Palestinian territories, to indicate the origin of its products. By indicating that products manufactured in the Mishor Edomin industrial park are “Israeli”, SodaStream is misleading consumers about the origin of the products and thus preventing consumers from making informed choices.

As well, labelling products as “Made in Israel” allows SodaStream to benefit from the preferential tariffs stipulated in various free trade agreements between Israel and other states, including Canada. In 2010, the European Union’s Court of Justice ruled that SodaStream cannot label certain of its products “Made in Israel” because they are made in the Jewish colonies in the West Bank. Since the ruling, SodaStream products made in the Mishor Edomin factory are not exempt from European duties. [13]

When should the boycott of SodaStream products end?

Apart from boycotting its products, how else can I pressure SodaStream?

CJPME’s boycott campaign encourages individuals and organisations to pressure the Israeli government to end the occupation of the Palestinian territories. Interested citizens may visit CJPME’s website (www.cjpme.org) to find additional tools to encourage SodaStream to halt its activities in the West Bank and to support Israel’s withdrawal from the Palestinian territories.

Sample letters are available at CJPME’s boycott centre at www.cjpmo.org/consumerboycott.htm

[5] “The Occupying Power shall not deport or transfer part of its own civilian population into the territory it occupyies.” Fourth Geneva Convention, 1949, Article 49.