CJPME Factsheet 181, published November, 2013: This factsheet provides an overview of the major phases of Jewish immigration to Palestine, with particular emphasis on the effect of the Zionist movement, the immigration between the two world wars, and the immigration following the founding of the modern state of Israel.

Factsheet Series No. 181, created: November 2013, Canadians for Justice and Peace in the Middle East
View factsheet in PDF format 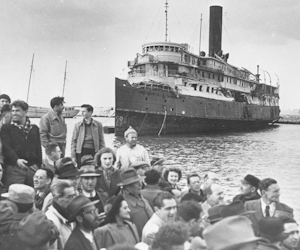 When did Jewish immigration to historical Palestine begin?

An ancient community: There was already an indigenous Jewish population in Palestine during the Ottoman Empire and before. Its members were concentrated principally in the holy cities of Jerusalem, Safed, Tiberias and Hebron. Nonetheless, the Jewish presence in Palestine, prior to the establishment of the State of Israel, had fluctuated through time, with various communities appearing and disappearing.[1] Regardless, in 1880, before immigration began, Palestine’s Jewish population numbered about 25,000, and had been deeply rooted there for several generations.

The beginning of Zionism and immigration: The beginning of modern, national-minded Jewish immigration coincides with the foundation of the modern Zionist movement. Zionism as a political movement is conventionally dated to 1882. Small groups of Jews dispersed through Europe began to cooperate to establish agricultural colonies in historical Palestine. These groups met officially for the first time in 1897, for the first Zionist conference, in Basel, Switzerland.

The first two waves of immigration took place under the Ottoman Empire. The first aliya[2], between 1882 and 1903, brought 20,000 to 30,000 Russians fleeing Czarist Russia’s pogroms. Between 1903 and 1914, during the second aliya, 35,000-40,000 more Russians, most of them socialists, established themselves in Palestine.[3] The newcomers were very active in the building of Tel-Aviv and also founded kibbutzim (collective villages).

Marginal immigration: This immigration remained small relative to both the total Palestinian population and the other destinations of the migrants. In fact, on the eve of WWI, the 80,000 Jews of Palestine constituted only a tenth of the country’s total population. Moreover, Jewish immigration to Palestine constituted only 3 percent of the transoceanic Jewish migration during that period. By way of comparison, of the 2,367,000 Jews who left Europe then, 2,022,000 established themselves in the US.[4]

With WWI and the subsequent famine, Palestine’s total population dropped. Its Jewish community now numbered only 60,000.

Why did Jewish immigration increase again after WWI?

Stronger immigration: The third and fourth aliyot brought 35,000 Jews from the Soviet Union, Poland and the Baltic countries between 1919 and 1923, and 82,000 Jews from the Balkans and the Near Orient between 1924 and 1931, respectively.[5] By the end of 1931, 174,600 Jews were living in Palestine, 17 percent of the population. During this period, 15 percent of the transoceanic Jewish migration was to Palestine.[6] There were many reasons for this surge in migration. 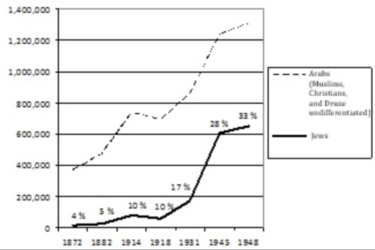 * The percentages indicate the proportion of the total population that was Jewish.

The Balfour Declaration: At the end of WWI, the Ottoman Empire was dismantled and Palestine came under the British mandate. Great Britain was in favour of establishing a Jewish national homeland in Palestine. In a letter written in 1917, Lord Balfour expressed this agreement, with the proviso that “… nothing shall be done which may prejudice the civil and religious rights of existing non-Jewish communities in Palestine ...”. The Balfour Declaration gave a legal basis for Jewish immigration, thus encouraging it.

The rise of anti-Semitism and Nazism : The increase in anti-Semitism in Europe led many Jews again to leave their countries. At the same time, the US Immigration Act of 1924 would greatly slow immigration from Europe by setting strict quotas per country. Diverse limitations on immigration were also implemented in Europe. This also explains in part Jewish migrants’ choice of Palestine. From 1932 on, with the Nazi victory in Germany and the intensification of persecution in Austria and Czechoslovakia, Jewish immigration to Palestine increased dramatically. Between 1932 and 1939, Palestine absorbed 247,000 newcomers,[7] 46 percent of Jewish emigration from Europe. [8] In the European political context, this fifth aliya constituted a flight rather than a “Zionist choice.”

British policy regarding Jewish immigration into Palestine evolved during the mandate period, as did the Jewish European response to it.

A policy favouring it from 1919 to 1930: The British were in favour of the establishment of a Jewish national home in Palestine. The first Zionists, under the Ottoman Empire, had been able to establish themselves in the country under the protection of foreign consulates, notably British ones. Nonetheless, in the wake of the increase in immigration during the 20th century’s first decades, Arab Palestinians began pressuring Great Britain, which found itself in the political crossfire. From the 1930s on, the British authority began providing fewer immigration certificates than there was a demand for. But the real change in policy took place in 1939.

Restrictions and criminalisation of Jewish immigration to Palestine from 1939 on: In an attempt to mollify the Arab Palestinian population, Great Britain emitted in 1939 a “white paper” restricting Jewish immigration to Palestine to 75,000 people over five years and limiting the purchase of land by Jews.[9] The creation of an independent Arab state within 10 years was also intended. However, the policy did not really slow Jewish immigration, because it opened the door to illegal immigration at a moment when the persecution of Jews in Europe was only intensifying. Until WWII began, and even after, tens of thousands of Jewish immigrants arrived in Palestine. Despite the interception of some ships by the British, many immigrants were able to establish themselves in Palestine.

The immigrants also found out how to establish themselves in Palestine thanks to gaps in the British system of regulation. For example, given that students were not obliged to have an immigration certificate to study in Palestine, many people enrolled at the Hebrew University in Jerusalem then remained in the country. Some young women entered the country declaring fictitious marriages to Palestinians. Still others arrived as tourists and never left. In the end, between 1939 and 1948, 118,228 Jews reached Palestine, despite the British restrictions. [10]

After the war, Great Britain jailed thousands of the illegal immigrants in detention camps in Cyprus.[11] This attempt to staunch immigration failed, and Britain was reproached for it in the post-Holocaust context.

Has immigration been promoted after the creation of the State of Israel?

After the creation of the State of Israel in 1948, all limitations on Jewish immigration were lifted, which triggered a large influx of migrants and displaced persons after WWII. The State of Israel also passed the Law of Return, under which any Jewish person has the right to immigrate to Israel.

The newcomers came from Europe, counties in the Near East, and the Maghreb. Jews in Arab countries, such as Iraq, faced growing public hostility because of the conflict in Palestine and later as a result of Israel’s creation at Palestinian Arabs’ expense. Fearing for their security, most Arab Jews eventually chose to emigrate, in response to hostile Arab governments and encouragement by Israeli representatives and agents who were eager to bring them to Israel. This combination of factors led to the nearly total disappearance of ancient Jewish communities in the Near East and Maghreb. Immigration leapt again in 1989-90, with the fall of the Soviet Union and the opening of borders in Eastern Europe. [12]

Today: In total, the State of Israel has absorbed 3.1 immigrants since its creation, 1 million of them between 1990 and 1999. The State of Israel has in fact strongly encouraged Jewish immigration with the objective of ensuring that the majority of Israel’s population remains Jewish, despite Arab Israelis’ high birthrate. Today, however, large-scale immigration is almost non-existent, with many residents leaving the country.

[2] The term aliya refers to the act of immigration to the Holy Land by Jews. It is also used to refer to the different waves of Jewish immigration to Israel.

[12] European Institute for Research on Mediterranean and Euro-Arab Cooperation.Palestinians [On-line] http://www.medea.be/fr/pays/territoires-palestiniens-occupes-tpo/palestiniens/ (Webpage consulted on May 28 2013).