CJPME Factsheet 185, published September, 2014: This factsheet provides an overview of Hezbollah: its emergence, its primary goals, and the source for its popular support in Lebanon. It also discusses how Hezbollah operates within Lebanon, and the services it provides.  Finally, this factsheet discusses the international disagreement over Hezbollah’s status.

Factsheet Series No. 184, created: September 2014, Canadians for Justice and Peace in the Middle East
View factsheet in PDF format 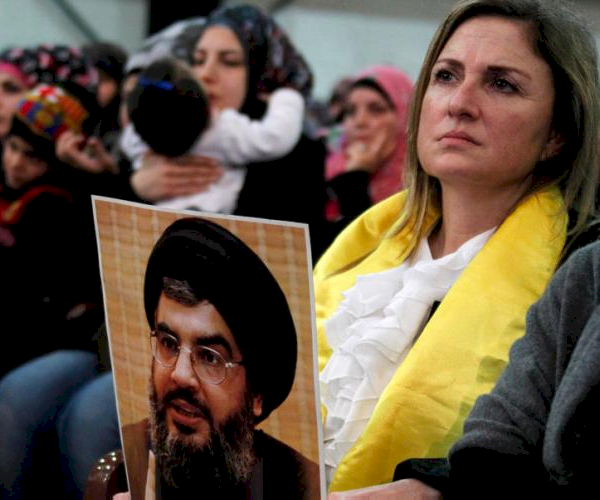 Hezbollah (“Party of God”, a.k.a. Hizbollah) is a Shia Islamist group based in Lebanon which functions both as a political party and as a military group.

Hezbollah emerged as a result of the 1982 Israeli invasion and occupation of Lebanon.  Former Israeli Prime Minister Ehud Barak put it succinctly in a 2006 interview:

Hezbollah is led by Hassan Nasrallah, elected leader in 1992, after Israel assassinated his predecessor, Abbas al-Musawi (along with Musawi’s wife and six-year old son).

What are Hezbollah’s primary goals?

To end foreign interventions in Lebanon and promote Islamic values:  In 1985, Hezbollah announced its existence via an “Open Letter”, identifying the US, the Soviet Union and Israel as its principal enemies.  The letter also called for the establishment of an Islamic state in Lebanon, modeled on Iran’s, but "on the basis of free and direct selection of the people, not the basis of forceful imposition". However, in recent decades Hassan Nasrallah has acknowledged that this vision would be impossible in multi-confessional Lebanon. As such, Hezbollah’s goals have morphed into promotion of multi-confessional opposition to foreign interference in Lebanon, and promotion of voluntary adoption of Islamic values, rather than an Islamic state per se.[ii]

To halt and reverse Israeli appropriation of “Muslim” lands: Hezbollah officially considers Israel an illegitimate state but has given mixed messages.  At times, it has called for Israel’s dismantling, but at other times, it has expressed an openness to the two-state solution in Palestine-Israel.  When asked in 2003 whether he was prepared to live with a two-state settlement between Israel and Palestine, Nasrallah said he would not sabotage what is a "Palestinian matter", but that until such a settlement is reached, he would continue to encourage Palestinian resistance.”[iii]

Why do many Lebanese support Hezbollah?

Anger over Israeli military incursions into Lebanon and an 18-year occupation of southern Lebanon: Israeli troops killed 20,000 people in the course of the 1982 land invasion and aerial assault on Lebanon. Israel also permitted the massacre of hundreds of Palestinian civilians in the Sabra and Shatila refugee camps by Lebanese Christian Phalangist militias.[iv] The invasion and the 18-year Israeli occupation of southern Lebanon (10 percent of Lebanon) generated great bitterness among Lebanese. The Shias, 40 percent of Lebanon’s population, bore the brunt of the Israeli invasion because so many of them lived in the south of Lebanon, directly in the path of the invading Israeli forces. Largely as a result of Hezbollah’s persistent armed resistance, Israel withdrew from Lebanon in 2000. Hezbollah’s will and ability to confront Israeli attacks is admired by Lebanon’s Shias and by many other Lebanese.

Hezbollah provides social services and health care. As noted by one UN organization:

The group currently operates at least four hospitals, 12 clinics, 12 schools and two agricultural centres that provide farmers with technical assistance and training. It also has an environmental department and an extensive social assistance programme. Medical care is also cheaper than in most of the country’s private hospitals and free for Hezbollah members.[v]

Altogether, as of 2006, Hezbollah was benefitting an estimated 250,000 Lebanese and was the country's second-largest employer.[vi]

How strong is Hezbollah?

Hezbollah is the largest single political and military force in Lebanon’s plethora of political groups. It reportedly had about 100,000 supporters, about half of them members, in 2004.[vii] It currently holds 13 of 128 seats in Lebanon’s parliament and two cabinet posts. Hezbollah has a strong political and military presence in southern Lebanon, southern Beirut and the Bekaa valley, in eastern Lebanon.  It maintains many checkpoints throughout the Shia areas of Lebanon.[viii]

Many consider Hezbollah militarily stronger than the Lebanese army. In 2006 Israeli Brig. Gen. Guy Zur described it as “by far the greatest guerrilla group in the world.”[ix] However, Hezbollah’s combatants are rarely seen armed in public. Hezbollah does not release figures on its number of fighters Estimates vary widely. US government sources say Hezbollah has “thousands” of fighters. Israeli sources in 2013 claimed Hezbollah had “thousands” of fighters in Syria and was training 50,000 in the event that the Assad regime was overthrown.[x]

Is Hezbollah a “terrorist” group?

There is disagreement on this point.  The Gulf Cooperation Council (the Islamic monarchies of Bahrain, Kuwait, Oman, Qatar, Saudi Arabia, and the United Arab Emirates), Canada, France, Israel, the Netherlands, and the US have designated the entire organization of Hezbollah as a “terrorist” organization.

However, the UK, the European Union, New Zealand and Australia designate only the military wing and/or the “External Security Organization” a terrorist group. Australia notes that Hezbollah as a whole is a:

“pragmatic political organisation with deep roots in Lebanese society, …  a multi-faceted organisation including political, social and military components. … (It)… maintains a social welfare network that encompasses education and health services. … As a fully-fledged political organisation, Hizballah engages with numerous international organisations and governments. For example, Hizballah liaises with the United Nations Interim Force in Lebanon (UNIFIL) in the context of the management of the cease-fire in southern Lebanon.”[xi]

UN Deputy Secretary General Mark Malloch Brown considers the “terrorist” designation inappropriate, but says that Hezbollah does on occasion employ terrorist tactics, and has criticized Hezbollah for that.

Many UN members consider Hezbollah simply a national resistance group, not a terrorist organization even in part.

How does Hezbollah operate?

Peaceful interaction with Lebanese civilians: Hezbollah fighters do not live in garrisons, but rather return to their individual homes when the fighting is done.  Despite the impact on Lebanese civilians of Israel’s attacks on Hezbollah, especially in 1996, Hezbollah emerged with its support among Lebanon’s Shias intact.  Its efficient and rapid response to the needs of civilians whose homes were ravaged—mostly but not all Shia Muslims—likely consolidated its base of support. It paid $10,000 to $12,000 to anyone losing their home during the war; apparently up to 15,000 homeless families received the grants, and affiliated architects and engineers planned the construction of new homes. Doctors dispensed free medicine, and Hezbollah distributed about 25,000 free meals daily during the weeks following the ceasefire. Its fighters left IOUs for items taken from shops during the war, and apparently honoured them.[xii] Unlike some other Islamist groups such as ISIS, Hezbollah does not generally abuse the civilian population in the territory in militarily controls.

Condemnation of terrorism by other Islamist groups: Hezbollah condemned Al-Qaeda’s September 11 2001 attacks on the World Trade Center towers. Nasrallah also criticized the attack on the Danish Embassy in Beirut that happened after the publication of the “Prophet” cartoon.[xiii] Hezbollah has been critical of ISIS’s brutality, battled ISIS in Syria, and categorized ISIS as a threat to the entire region.

Fair treatment of Lebanese collaborators with Israeli occupation forces: When Israel withdrew from Lebanon in 2000, Hezbollah forces respected Nasrallah’s order not to lynch or intimidate Israeli collaborators,” but rather to let the Lebanese courts deal with them [xiv]

[xiv] Cambanis, Thannasis. "A Privilege To Die: Inside Hezbollah’s Legions and Their Endless War Against Israel". Free Press. p. 5