CJPME Factsheet 187, published June, 2014: In the months following the 2013 coup in Egypt, the new military-backed government of Al-Sisi begin a campaign of persecution against the Muslim Brotherhood.  One of the most upsetting elements of this campaign of persecution involved the sentencing of over 500 individuals to death in ridiculously unfair trials.  This factsheet summarizes this upsetting development.

Factsheet Series No. 187, created: June 2014, Canadians for Justice and Peace in the Middle East
View factsheet in PDF format 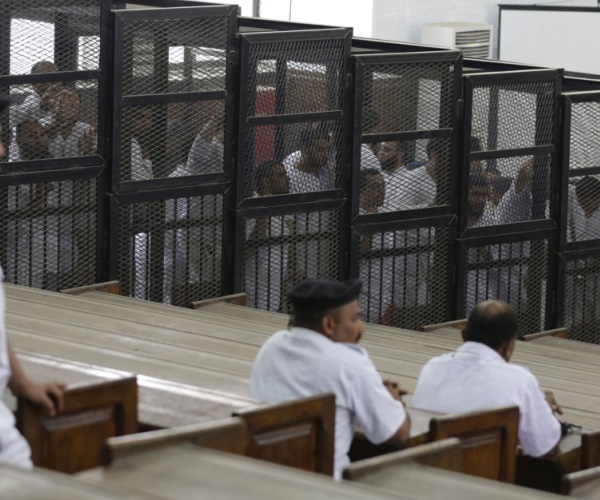 How many people have been sentenced to death?

On March 22, 2014, 529 people were sentenced to death in Upper Minya’s criminal court by Judge Saeed Youssef after a one-hour trial. According to Egypt’s judicial laws, for a death sentence to be carried out it must be referred to the country’s grand mufti and later confirmed by a judge. Upon the completion of this process, Judge Youssef confirmed 37 of the death sentences April 28, 2014, with the remaining 491 reduced to life imprisonment.

In another trial April 28, 2014, 683 people were sentenced to death in the same Upper Minya court by the same judge. Upon referral to Egypt’s grand mufti, 183 of the aforementioned sentences were confirmed, four were reduced to life imprisonment and the remaining defendants were acquitted.[1]

The total of 220 confirmed death sentences is regarded as the largest number of mass death sentences in Egypt’s recent history.  Sarah Leah Whitson, Director of Middle East and North Africa for Human Rights Watch, described the decision as “handing out death sentences like candy.”[2] Of the 683 people sentenced, only 110 attended the only session of the trial—held March 25, 2014. All other sentences were handed out in absentia.

In what context were the death sentences issued?

Over the past three years Egypt has experienced extreme political turmoil. After the ouster of former president Hosni Mubarak in February 2011, the Supreme Council of the Armed Forces took control until the first post-Mubarak presidential elections in June 2012. The winner, Freedom and Justice party candidate Mohamed Morsi, was sworn in as Egypt’s first democratically elected president on July 1, 2012.

Exactly a year later, Egyptian streets filled with protesters demanding Morsi’s resignation. For the second time in two years the military intervened, arresting Morsi on July 3, 2013. The intervention sparked enormous demonstrations by supporters of Morsi and the Muslim Brotherhood and other opponents of military rule, leading to clashes.  Protestors began sit-ins in Cairo and other cities demanding that Morsi be released and reinstated.

On August 14, 2013 the new authorities violently dispersed two sit-ins in Cairo—one in Rabaa Adawiya and the other in Nasr city. When news of the forced clearance of pro-Morsi camps and mass arrests reached Minya and other southern provinces, large crowds rallied in the streets and started attacking police stations, leaving one officer dead and several others injured. This act of violence became the pretext under which hundreds of people have been held, charged and eventually sentenced to death.

The detentions and death sentences occurred amid what Amnesty International has described as a generalized “catastrophic decline in human rights” in Egypt. (See “Is the Muslim Brotherhood the only target?” below.)

Did the trials meet international standards for fairness and due process?

No. Egypt is a party to the Covenant on Civil and Political Rights. According to article 14(3) of the Covenant,   each defendant has a right to the following:

According to Human Rights Watch and Amnesty International, both trials were marked by gross violations of the international norms and Egypt’s legal obligations.

In the first trial, Judge Youssef refused to allow defence lawyers a reasonable amount of time to examine and review 3,070 pages worth of evidence presented to the court by the prosecution;[3] defence lawyers say the judge could not have read the evidence either in the two-day interval between introduction of the evidence and the verdict.  In the second trial, defence teams were not allowed to cross examine witnesses and some were even barred from the 15-minute sentencing session.[4] None of the accused was brought to court to hear the verdict in the second trial, a violation of Egyptian law.[5]

What is Egypt’s official stance on these death sentences?

Egyptian justice minister Nayer Osman claimed that Egyptian judges are non-partisan and do not issue sentences influenced or dictated by any state official or a minister. He then rejected both internal and international criticism of the Egyptian judicial system. Judge Youssef revealed his biases when he stated that the 720 men he sentenced to death include “demons who came out of the depths of hell disguised in the cloak of Islam, who aimed to seize the reins of power in Egypt, loot its wealth and enslave its people,” referring to members of the Muslim Brotherhood.[6]

On May 6, 2014, while running for the presidency, former defense minister and leader of the armed forces Field Marshal Abdel Fatah Al-Sisi stated in an interview with Egyptian broadcaster CBC, “There will be nothing called the Muslim Brotherhood during my tenure.”[7] This indicates that Al-Sisi, now president, has every intention of continuing the crackdown on the Muslim Brotherhood—Egypt’s largest single grassroots organization—and possibly allowing further death sentences. [8]

What is the international reaction to the death sentences?

UN High Commissioner for Human Rights Navi Pillay condemned the sentences on April 29, 2014, saying “international fair trial guarantees appear to be increasingly trampled upon.” The UN Secretary General warned that such mass verdicts compromise the country’s quest for stability.[9] The sentences also drew widespread criticism from foreign governments. For example, Norwegian foreign minister Børge Brende condemned the sentences and criticised the Egyptian authorities for violating their international obligations under the Covenant on Civil and Political Rights. However, despite the trials’ egregious and massive violations of human rights norms, the US resumed the delivery of a $1.3 billion aid package including military aid.

Canada has not used its considerable leverage to pressure the Egyptian authorities to ensure due process. It appears that Foreign Minister John Baird’s April 2014 trade mission to Egypt was read as indifference to the death sentences imposed shortly before the trip, and to the imprisonment of Canadian-Egyptian journalist Mohamed Fahmy and his colleagues. Despite Baird’s later description of the death sentences as “patently ridiculous,” Canada-Egypt trade deals remain in effect.

Is the Muslim Brotherhood the only target?

No. Journalists, students, human rights defenders and dissidents unaffiliated to the Muslim Brotherhood have also been targeted and brutalised in the crackdown.

According to Amnesty International, a surge in arbitrary arrests, detentions, deaths in police custody and harrowing incidents of torture signal a “catastrophic decline in human rights” since Morsi’s ousting in July 2013.  At least 16,000 people have been detained and at least 80 deaths in custody have been recorded in the past year. Torture and other ill-treatment in detention continue unabated and fair trial standards are being routinely flouted.[11]

On December 29, 2013, three Al Jazeera English service journalists were detained: Canadian-Egyptian producer Mohamed Fahmy, Australian correspondent Peter Greste and Egyptian local producer Mohamed Bahr. They were accused of spreading lies shameful to state security and aiding a terrorist organization. Their detentions and sentencing to 7-10 years in prison have drawn widespread condemnation from human rights organizations and international media outlets, who have complained of the chilling effect on freedom of expression and media freedom in Egypt that the arrests of journalists have had.[12] A total of 20 Al Jazeera journalists have been detained by Egyptian authorities since July 2013.[13]