CJPME Factsheet 189, published October, 2014: This factsheet summarizes Canada’s military trade with countries in the Middle East, from the massive $15 billion deal signed with Saudi Arabia in 2013, to smaller earlier deals with other various countries.  This factsheet also explores the ethical questions related to Canada’s role as a supplier of military equipment in a volatile region.

Factsheet Series No. 189, created: October 2014, Canadians for Justice and Peace in the Middle East
View factsheet in PDF format 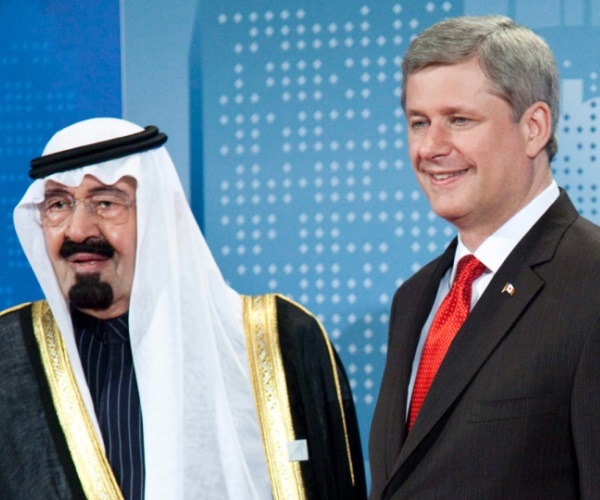 Saudi Arabia, one of the world’s most repressive regimes, has now surpassed the US as the largest recipient of Canadian military exports via contracts brokered by the Canadian Commercial Corporation (CCC), a crown corporation. This is due to a recently announced pair of mega-contracts totalling $14.8 billion for military armoured vehicles to Saudi Arabia by General Dynamics Land Systems Canada of London, Ontario, awarded in the 2013-14 fiscal year.[1]

As noted by researcher Kenneth Epps, the magnitude of these contracts is unprecedented in Canadian history. In the latest fiscal year US orders totalled $592.2-million, about four per cent of the value of the Saudi orders. The new Saudi contracts change the norm, making Saudi Arabia the alternative major recipient of Canadian arms exports for years to come.

Saudi Arabia has been the largest reported recipient of Canadian military exports in many of the years since 1991.

When Saudi troops rolled into Bahrain to help the Khalifa monarchy crush protests against its autocratic rule in 2011, they arrived in Canadian-made Light Armoured Vehicles.

Canada’s exports to Saudi Arabia were already on the rise prior to the announcement of these contracts:

What is the Saudi human rights situation?

Saudi Arabia’s human rights record is abysmal. According to Human Rights Watch, Saudi Arabia’s new terrorism law and a series of related royal decrees create a legal framework that appears to criminalize virtually all dissident thought or expression as terrorism.  The regime does not permit even peaceful protest; some protesters have now been sentenced to death, hundreds were arrested. Beheadings are common. Trade unions are prohibited. Women are not allowed to drive, and have few legal rights. Saudi Arabia executed at least 19 people between August 4 and August 21, 2014. In July 2014, a Saudi court sentenced the prominent human rights activist Waleed Abu al-Khair to 15 years in prison, after convicting him on vague charges stemming solely from his peaceful activism (e.g. statements to news media and tweets criticizing human rights abuses).

Canada also exports to other Middle East regimes. See Table 2 below, covering exports from 2004-09. It should be noted that the figures below do not include exports of dual-use items such as helicopters, even if the client is the armed forces of a particular country, since helicopters are not categorized as military items.

All figures in constant 2009 dollars.

Why are exports to the Middle East’s authoritarian regimes problematic?

Exports of military goods, or dual purpose goods, such as helicopters, to the armed forces of authoritarian regimes are problematic for various reasons:

1)      The Middle East is already extremely over-armed, one of the reasons why conflicts between countries and within countries tend to take a violent turn.

2)      The military goods are likely to be used by army and police against civilians engaged in peaceful protest.

3)      Military exports are likely to be used, period. In this volatile region, such armed conflicts can easily escalate.

5)      Middle East recipients of exported military goods do not respect international law’s prohibition on attacks on civilians and civilian infrastructure.

Are Canadian companies involved in other unethical activities in the Middle East?

Yes. Examples of such questionable activities include:

Egypt’s human rights situation was poor before the Arab Spring, and deteriorated dramatically after the military coup that deposed the first democratically elected president, Mohamed Morsi, in July 2013.  Thousands of peaceful protesters are currently in detention. However, despite the mass death sentences pronounced in the summer of 2014 after patently unfair trials, and the ongoing imprisonment of Canadian journalist, Foreign Minister John Baird continued to promote Canadian investment there.

Successive Canadian governments appear to have raised no objections to such Canadian corporate involvements, nor made any attempt to incorporate human rights incentives into trade deals.