CJPME Factsheet 192, published April, 2015: This factsheet talks about Islamophobia in Canada, addressing Islamophobia as promulgated by government institutions, as well as in society at large.

Factsheet Series No. 192, created: April 2015, Canadians for Justice and Peace in the Middle East
View factsheet in PDF format 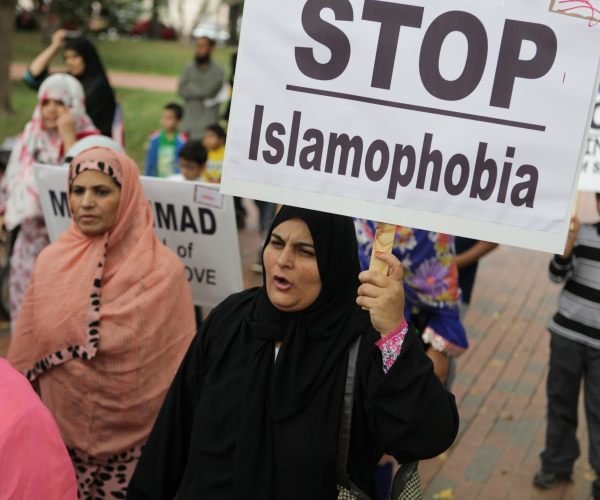 The term “Islamophobia” was first coined in 1997 as an “unfounded hostility towards Muslims, and therefore fear or dislike of all or most Muslims.”[1] However, recent analysis and scholarship has expanded this definition to include discrimination against individuals who may also be perceived as Muslim. This can manifest itself based on dress, race, name, language, accent, or other cultural markers.[2] [3] Islamophobia is not uncommon in many Western societies, including Canada. In a 2013 Angus Reid poll, 54 percent of Canadians held an unfavourable view of Islam with the number increasing to 69 percent among Quebec residents.[4]

How have governments sanctioned Islamophobia in Canada?

Islamophobia affects targeted individuals in a number of ways. In a recent report by the CJPME Foundation, researchers highlighted a trend of government-sanctioned Islamophobia. Islamophobia is particularly troubling when it threatens rights to citizenship, access to employment, and community integration.[5]

Access to Citizenship: In regards to citizenship, some of the policies of Citizenship and Immigration Canada discriminate against individuals who observe particular religious practices. For example, current regulations stipulate that, “candidates for citizenship wearing a full or partial face covering must be identified […] The candidates must be advised at this time that, they will need to remove their face covering during the taking of the oath.”[6] Despite a strong Canadian tradition of commitment to civil liberties and freedom of religion, the practice of requiring candidates to remove religious garb in order to acquire Canadian citizenship promotes the notion that one cannot retain one’s full religious identity while becoming Canadian, especially if one happens to be a Muslim woman. Indeed, Federal Justice Keith Boswell agreed, asserting that this portion of the citizenship ceremony guidelines remains unlawful.[7]

Muslims’ access to citizenship has been curtailed in other ways as well. Following its commitment to welcome a set number of Syrian refugees from the country’s civil war, the Canadian government announced that it would be giving priority to applications from religious minorities. The move was widely condemned by the United Nations and Amnesty International, as it seemed intended to ensure that Muslim Syrians would be less likely to receive citizenship than refugees who identify with other religious groups.[8]

Access to Employment: Canadian Muslims also face discrimination from government institutions in access to employment. While the Quebec Charter of Values,[9]  proposed by the provincial Parti Québécois government, did not pass in the autumn of 2013, the proposed legislation would have severely infringed on Muslims’ opportunities for employment.  Among other things, it would have prohibited public servants from wearing religious garb while at work.[10] Though the bill was not passed, it underscores the degree to which Canadian society has become paranoid vis-à-vis symbols of Islam and Muslims more generally.

This unease is clearly demonstrated upon examination of an incident that occurred in a Québec Employment office earlier this year. In one incident, a government employee told a Muslim woman that she would be unable to find work if she continued to wear a hijjab. The employee stated, “[…] this is a secular, liberal society […] You need to go to an Arab country. You made a decision to put yourself into a ghetto and that’s your problem.”[11]

Community integration: A third form of Islamophobia promulgated by government institutions in Canada exists in terms of barriers to community integration.  For example, in the Quebec town of Shawinigan, the city council refused to rezone an industrial park to allow a mosque to open as a result of what the mayor called “irrational fears.”[12] Similar incidents took place in other Quebec municipalities, despite the fact that such “discrimination by zoning” is strictly illegal.[13]

No long afterwards, a Quebec judge refused to hear the case of a Muslim woman because the woman refused to remove her hijjab.  Certainly, access to the judicial process is essential for the societal integration of any religious minority. [14]

Occurrences such as these demonstrate how Islamophobia is present in government bodies and institutions, often inhibiting Muslim community integration, both literally and culturally.

While government-sanctioned Islamophobia is particularly egregious, most manifestations of Islamophobia are much more subtle and typically manifest themselves in day-to-day acts of petty racism. Though Canadian law prohibits employers from discriminating on the basis of religious affiliation or race, unemployment rates are significantly higher amongst Muslims than among other groups with similar skills. Moreover, a 2012 study by the Commission des droits de la personne et des droits de la jeunesse du Quebec found that job candidates with traditionally Quebecois or Canadian names were 1.63 times more likely to receive a call back than candidates with similar skills who had traditionally Arab names.[15]

Another example is that of Herouxville, Quebec where civic leaders implemented a code of conduct in 2007 for new immigrants, despite being home to virtually zero foreign-born individuals or visible minorities. The bizarre document was clearly aimed at Muslims as it forbade the wearing of head coverings, and certain archaic practices sometimes associated with Islamic stereotypes.[16]

While Islamophobic sentiment appears to be more common in Quebec, mosques in cities such as Vancouver and Hamilton have also been vandalized in recent years. In another example, the Canadian magazine Macleans ran a 4800-word opinion piece in 2006 which argued that Muslims pose a “demographic, cultural, and security threat to the West.”[17]

Islamophobia has existed in multiple forms for many years. Like most racial or religious minorities, Muslims have been perceived as “different” from larger society in different ways over time, dating back to the era of European colonialism. However, many Muslims living in the West have reported a rise in Islamophobic sentiment following the events of September 11th, 2001.[18]  Polling conducted by Ipsos Reid in 2001, which found that 60% of Canadians agreed that Muslims faced increased discrimination compared to 10 years prior, further corroborates these reports.[19] Multiple scholars have attributed this increase in Islamophobia to the perceived connection between Muslim individuals and violence or terrorism.[20]

Violent acts perpetrated by self-identified Islamic groups have appeared more frequently in news media in recent years. The rise of the Islamic State group (often referred to as ISIS or ISIL) and the media coverage they have received likely contributes to negative stereotypes associated with Islam. The same can be said of groups such as Al-Shabaab, Boko Haram and the Taliban. While loathing of the terrorist acts committed by such groups is understandable, it is patently unfair to penalize peaceful Muslim-Canadians living down the street for the acts of such groups. In fact, key Muslim leaders in the West consistently condemn the acts of such groups overseas.[21]

Is there a way to combat Islamophobia?

The CJPME Foundation has recommended that the Canadian government make a concerted effort to apply existing constitutional and legal guarantees against discrimination on the basis of race or religion. The CJPME Foundation also recommended government guidelines and sensitivity training for public employees.  Such programs could prevent situations such as the Emploi-Québec case mentioned above. [22]