CJPME Factsheet 193, published April 2015: This Factsheet provides an overview of the Yemeni Civil War, looking at the Arab Spring's impact on Yemen, the origins of the conflict, and the groups involved.

Factsheet Series No. 193, created: April 2015, Canadians for Justice and Peace in the Middle East
View factsheet in PDF format 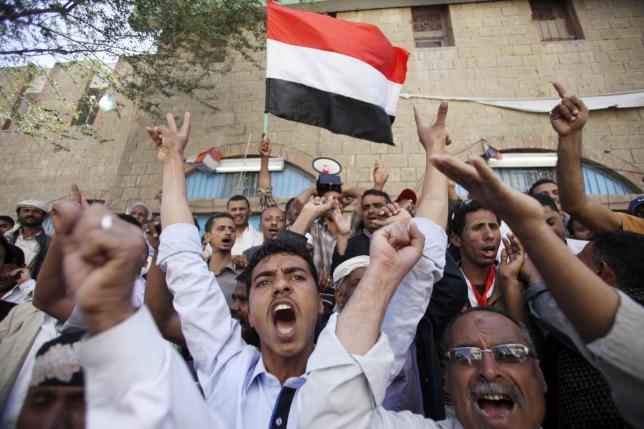 What is the background to the 2015 conflict in Yemen?

Despite being considered a Gulf country, Yemen shares neither the authoritarian stability nor the wealth that is characteristic of its neighbours. Regardless of its oil exports, the country remains relatively poor and has experienced a number of political changes since the North and South gained independence in 1962 and 1967, respectively.[1][2] The country was unified in 1990, however, Southern dissatisfaction with the terms of reunification led to an unsuccessful secessionist war in 1994.[3]
Since the end of the civil war in the 1990s, Yemen has been largely under the rule of Ali Abdullah Saleh. The rise in development of Yemen’s oil fields in the 1990s allowed President Saleh to maintain power through an expansive network of state patronage and neopatrimonialism. However, economic benefits were distributed unequally, often benefitting the North and President Saleh’s Hashid tribe, despite government expropriation of oil-rich land in the South.[4] This income inequality became a large source of societal disenchantment with the regime and likely contributed to the protests that gripped the country during the Arab Spring of 2011.[5]

It is also worth noting that, during his rule, Saleh frequently exploited Yemen’s geopolitical position and the terrorist threat of Al Qaeda in the Arabian Peninsula (AQAP) in order to allow foreign intervention against rebel groups. For example, in 2009 President Saleh allowed Saudi forces to enter the country to suppress a Houthi rebellion by exploiting fears that the crisis could cross the border into Saudi Arabia.[6] Instances such as these are critical for providing background to the civil war in 2015.

How did the Arab Spring impact Yemen?

Societal demands for reform in Yemen began long before the Arab spring, with protestors taking to the streets to call for better government as early as 2008.[7] However, large-scale protests only began in January of 2011 following the wave of uprisings that were occurring in both Egypt and Tunisia.[8] The government response to protests was violent, with security forces killing dozens of protestors in March of 2011. However, rather than suppressing the movement, state violence served to mobilize the population and eventually resulted in what can only be described as a mass uprising.[9] In addition, the increasingly unequal concentration of wealth amongst members of President Saleh’s family and tribe members led to many defections amongst veteran political elites. By May of 2011, the situation was no longer tenable and President Saleh was forced to begin considering the many proposals brought forth by the Gulf Cooperation Council (GCC) for a peaceful transfer of power.[10] After being injured in a car bombing in June, President Saleh finally agreed to leave office in November of that same year and transferred power to his deputy, Abdrabbuh Mansour Hadi.[11]

How did the violence erupt?

Though the peace deal brokered by the GCC and its allies was meant to restore a degree of political stability to Yemen, President Hadi was unable to adequately incorporate various groups into government, including the Houthis.[12] The leadership of the Shi’a Houthi rebellion has its roots in Northern Yemen and claim to be descendants of the Prophet Muhammad – a claim they often use to mobilize followers and challenge the government. As such, including the Houthis in government is crucial to ensuring a degree of political viability within the country.[13] In addition, both the Hadi government and the Houthis have been confronted with an increasingly powerful AQAP, which has in turn prompted U.S. drone strikes throughout the country.[14]

In the summer of 2014, the Hadi’s government voted to cut fuel subsidies, which had the potential to lead to significant increases in prices. Coupled with the already fragile political situation, thousands of Houthi supporters took to the streets to advocate the overthrow of the government, denounce corruption, and demand the reinstatement of fuel subsidies.[15] The protests resulted in rebel raids on key government institutions in the capital city of Sana’a.[16]

As a result of the increasing turmoil, President Hadi invited the Houthis to join a unity government and the two parties ultimately signed a peace deal brokered by UN Envoy to Yemen, Jamal Benomar. Nonetheless, groups of Houthi rebels continued to seize various territories and violence erupted once again in January of 2015 when the first draft of the new constitution was unveiled and the two parties were unable to agree on a compromise.[17]

The result was a Houthi seizure of state television resources, violent clashes with security officials, and essentially a takeover of the Republican Palace by early February in what many described as a de-facto coup.[18] [19] President Hadi, who had resigned following these events, eventually fled to his hometown of Aden, rescinded his resignation and tried to retain what power he could before fleeing to Riyadh in late March.[20]

Who is involved in Yemen’s conflict?

As detailed above, the current civil war largely began with conflict between the former Hadi government and the Houthi rebels. However, many other parties have been involved to varying degrees throughout the country.

As mentioned earlier, there is a long tradition of Saudi involvement in internal Yemeni politics, largely because of the extensive border between the two countries.[21] [22] In the current climate, the Saudi government remains highly concerned about the possibility of violence spilling across the border, not only as a result of the Houthi rebellion but also due to the expansion of AQAP, which is quickly gaining ground in Yemen.[23] GCC intervention against the Houthis, led by Saudi Arabia, began in March 2015 with weeks of airstrikes in the country.[24]

Houthi rebels, on the other hand, have been receiving funding from Iran, the largest Shi’a power in the region. While many have a tendency to assume the Houthis are acting as a proxy for Iranian interests, scholars have pointed out that this is not necessarily the case. The Houthis remain a local Yemeni group with grievances dating back to pre-unification and experts believe that while they are accepting funding from Iran, their agenda is almost entirely their own.[25]

In addition to foreign involvement, the dissolution of the official government in January has allowed many extremist groups to expand within Yemen. AQAP, which has been present for many years, has been able to expand its territory and its resources, often operating openly.[26]  More recently, the Islamic State group (ISIS) has claimed responsibility for a number of deadly terrorist attacks within the country, prompting many to wonder whether the group has officially expanded to Yemen.[27]

Though the United States is not considered a major player in the conflict, they nonetheless have a fundamental interest in the future of Yemen. Like Saudi Arabia, many Western intelligence agencies consider AQAP a serious threat. As a result, the U.S. had been using its favourable relationship with the Hadi government to conduct drone strikes againt AQAP operatives within Yemen, as well as to exchange intelligence. With President Hadi having fled to Riyadh, the U.S. would like to ensure that AQAP does not have the opportunity to expand its operations further.[28]

Lastly, other Middle Eastern countries also have interests in Yemen. The GCC intervention mentioned earlier not only includes 5 Arab Gulf states, but also Egypt, Jordan, Morocco and Sudan. Egypt is particularly concerned with the current civil war given Yemen’s strategic positioning – it sits directly on the Bab al-Mandab strait, which links the Red Sea and the Gulf of Aden. Both Egypt and Saudi Arabia are strongly concerned that a Houthi takeover could lead to conflict in the Strait and, as a result, reduced commercial access.[29]