CJPME Factsheet, published Mar 01, 2018: This factsheet sheds light on the widespread and systematic Israeli abuse of Palestinian children who are subject to Israeli military law. It explores how the NWTTAC campaign seeks to challenge and end Israel’s prolonged military occupation. Finally, the factsheet explores how Canada can make a difference.

No Way To Treat A Child (NWTTAC) Campaign 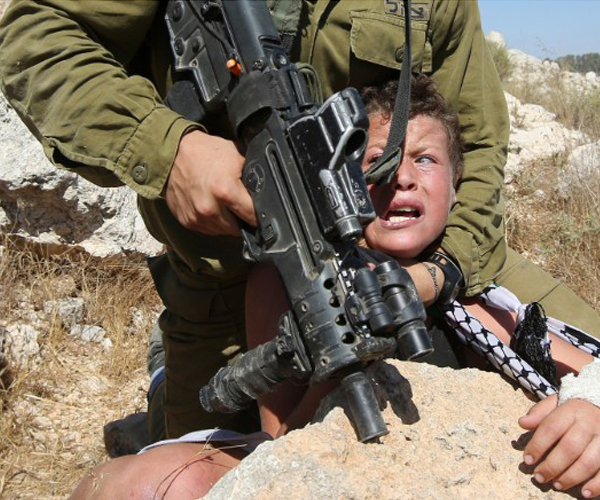 What motivates the NWTTAC campaign?

In 2013, Defense for Children International Palestine (DCI Palestine) and the American Friends Service Committee (AFSC) launched the “No Way To Treat A Child” (NWTTAC) campaign in the United States. NWTTAC has grown significantly in recent years, as an international movement that “seeks to challenge and end Israel’s prolonged military occupation by exposing widespread and systematic ill-treatment of Palestinian children in the Israeli military system.”[i] NWWTAC has an extensive network of people who call on governments and civil society to take concrete steps to ensure the protection of Palestinian children’s rights and to hold Israeli authorities accountable to their obligations under international law.

After a successful run in the United States, the NWTTAC campaign has already gathered dozens of prominent national, regional and local partners in Canada. A few of the important organizations which have endorsed NWTTAC include Amnesty International Canada, the United Church of Canada, the Mennonite Central Committee Canada, Canadians for Justice and Peace in the Middle East and Independent Jewish Voices.

Where does the campaign draw its legitimacy from?

The campaign draws its legitimacy from international law, notably 1) the UN Convention on the Rights of the Child (1989), ratified by Canada in 1991, and 2) the 4th Geneva Convention (1949).

DCI Palestine is concerned with “holding both Israeli and Palestinian authorities to account, and providing legal services to children in urgent need.”[ii] Palestinian children in Israeli detention centers are in such urgent need that a 2013 UNICEF report concluded, “ill-treatment of [Palestinian] children who come in contact with the military detention system appears to be widespread, systematic and institutionalized throughout the process.”[iii]

DCI Palestine is a local Palestinian child rights organization based in Ramallah, Palestine. As such, its staff know the reality on the ground, and have been investigating and documenting grave human rights violations since 1991. Both the Israeli government and Palestinian Authority have officially recognized DCI Palestine as an independent Palestinian non-governmental organization.[iv]

Why does NWTTAC target Israel, and no other country?

As Human Rights Watch reminds us, Israel is certainly not the only country in the world where child detainees “are held in decrepit, abusive, and demeaning conditions, deprived of education, access to meaningful activities, and regular contact with the outside world.”[x] But Israel remains the only country that “automatically and systematically prosecutes children in military courts that lack fundamental fair trial rights and protections.”[xi] Each year, Israel arrests, detains, and prosecutes 500 to 700 Palestinian children in the military court system.[xii] By way of comparison, Egypt – with roughly 10 times the population of Israel – had less than 100 children arrested for political offenses and tried in military courts between 2013 and 2015.[xiii] Since the age of majority was set at 16, Israel also became one of only 10 countries worldwide to allow children to be held under administrative detention, as a preventive measure to counter terrorism.[xiv] [xv]

Israel also receives greater scrutiny because its abuses occur in the context of a military occupation. Israeli judges have wide discretion in Israel’s military courts, and often disfavour Palestinian suspects.[xvi] Addameer, a Palestinian prisoners’ rights group, points out that the Israeli interrogators are granted “the utmost flexibility in their conduct of interrogations of Palestinian detainees [which] reduces legal safeguards to the absolute minimum, far below civil law standards.”[xvii] Addameer also reports that many Palestinian detainees are political prisoners.[xviii] Under the pretext of preventive defense, the military courts prosecute one and only ethnic group, the Palestinians: “no Israeli child ever comes into contact with the military court,”[xix] observed DCI Palestine.

Israel claims a place among Western democratic nations, yet it fails to respect long-standing international conventions. Although Israel ratified the Convention on the Rights of the Child in 1991, Israeli authorities continue to violate international juvenile justice standards. The Convention states that “children should only be deprived of their liberty as a measure of last resort, must not be unlawfully or arbitrarily detained, and must not be subjected to torture, inhuman or degrading treatment or punishment.”[xx] Stone throwing is the most common charge levied against Palestinian children – hardly an offence that requires a legal act of “last resort” – and children can face up to 20 years of prison if convicted[xxi] In 2013 the UN Committee on the Rights of the Child reported cases of torture against Palestinian children in Israeli custody.[xxii] The Israeli government has yet to investigate these reports.[xxiii]

How can Canada make a difference?

NWTTAC believes that people in other countries – like Canada – can exert pressure to ensure Palestinian children enjoy a safe and just future. NWTTAC encourages civil society groups to promote a settlement of the Israeli-Palestinian conflict based on universal human rights, justice and respect for human dignity. NWTTAC encourages governments – like Canada – to make diplomatic efforts to pressure Israeli authorities to end the detention and abuse of Palestinian children. This includes:

[ii] “Who we are: Affiliation.” Defense for Children International Palestine. 2018. Accessed February 28, 2018. http://www.dci-palestine.org/who_we_are

[iv] Ibid. “Who we are: Affiliation.” Defense for Children International Palestine.

[viii] Ibid. US Department of State.

[ix] Ibid. US Department of State.

[xv] The other countries are Malaysia, Jordan, Egypt, Australia, the UK, Botswana, Cameroon, India and Thailand.

[xx] “Article 37: Torture and deprivation of liberty.” United Nations Convention on the Rights of the Child. 1989. Accessed March 1, 2018. https://www.crin.org/en/home/rights/convention

[xxiii] Ibid. US Department of State.