CJPME Factsheet, published August, 2018. This factsheet discusses how the Israeli government uses "greenwashing" by pretending to be environmentally-friendly in order to deflect attention from its human rights abuses against Palestinians.

Factsheet Series No. 210, created: August 2018, Canadians for Justice and Peace in the Middle East
View factsheet in PDF format 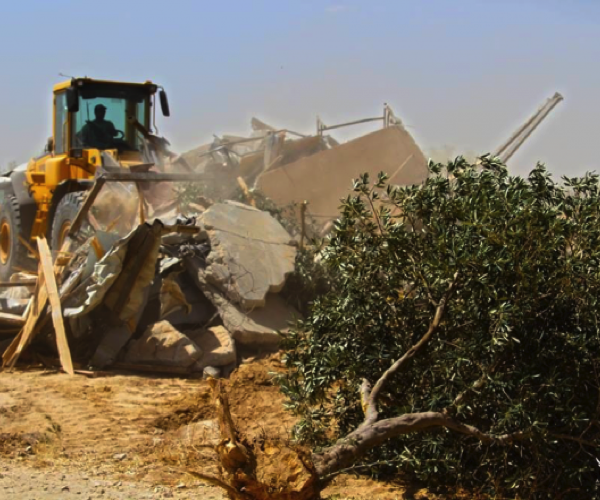 Greenwashing is a practice that involves pretending to be environmentally friendly in order to deflect attention from criminal activity.[i] In 1948, when the state of Israel was created, over 700,000 indigenous Palestinians became refugees, and hundreds of thousands more were displaced from their homes by Jewish militias[ii]. Since then, Israel has continued to commit grave human rights abuses against Palestinians.[iii]

Israel greenwashes its colonial projects and human rights abuses against Palestinians in various ways. One way is through its rhetoric, claiming, for example, that Israel “made the desert bloom”[iv]. But there are many other ways in which Israel and its proponents greenwash Israel’s abysmal human rights record.

Did Israel “Make the Desert Bloom”?

No.  This myth benefits Israel in two ways. First, this myth erases Israel’s expulsion of hundreds of thousands of Palestinians by falsely suggesting that Palestine was a deserted land, which Zionists were able to rightly claim without displacing or dispossessing anyone. Second, this myth portrays Israel as a progressive and technologically advanced country, which cares about the environment and was able to quickly green a desert.  The claim that Palestine was an empty desert that Israel “made bloom” is false, because:

Not particularly.  There are a number of ways in which Israel is clearly not environmentally friendly:

Social justice experts also assert that human rights and environmental rights go hand in hand[xxi]. It is difficult to argue that Israel is environmentally friendly, while being a colonial and apartheid state which severely undermines the rights of certain racial minorities.

How does the JNF greenwash Israel?

The Jewish National Fund (JNF) is an organization which enables Israel’s ongoing colonization of Palestine and helps greenwash Israeli crimes. The JNF was founded in 1901 to acquire land in Palestine for Jewish-only use. Despite its racially-based mandate and its involvement in settler-colonial projects, the JNF deceptively depicts itself as an environmental charity, procuring charitable status in many countries – including Canada.[xxii] For example, the JNF plants trees over destroyed Palestinian villages to conceal evidence of the ethnic cleansing carried out by Israeli forces. .[xxiii] To date, 86 destroyed Palestinian villages are buried under JNF forests.[xxiv] The JNF thus uses environmental policy, like tree planting, as a tool to greenwash Israel’s destruction of Palestinian villages.

While the JNF claims to have had large successes with forestation, combating desertification, rehabilitating forests, and preventing forest fires,[xxv] the JNF has actually done the opposite:

Aytzim, a New York-based organization which also engages in greenwashing for Israel admits: “[the JNF] had a blemished record on the environment throughout its history".[xxxi]

What is Canada’s relationship to Israeli greenwashing?

Successive Canadian governments have supported Israel politically, financially and diplomatically for decades, ignoring Israel’s violations of human rights.[xxxii] Perhaps as a result of this close relationship, the JNF’s branch in Canada has enjoyed charitable status for years, and therefore has its activities subsidized by the Canadian taxpayer. Decades ago, the JNF Canada raised $15 million to build “Ayalon Canada Park” in the West Bank – occupied Palestinian territory. This park was built over the Palestinian villages of Imwas, Yalu, and Beit Nuba, which were destroyed by Israel in 1948.[xxxiii]

Outraged by the Canadian government’s silence on Israeli human rights abuses, especially greenwashing, many Canadians have joined the international “Stop the JNF” campaign, which was launched by Palestinian civil society and various human rights groups.[xxxiv] You can learn more about it at http://www.stopthejnf.org/.

[iii] Richard Falk & Virginia Tilley. “Israeli Practices towards the Palestinian People and the Question of Apartheid Palestine and the Israeli Occupation”. UN. Economic and Social Commission for Western Asia (ESCWA), No. 1.

[xi] “Carbon emissions per person per country”. The Guardian, 2016.

[xii] Alon Tal. “To Make a Desert Bloom: The Israeli Agricultural Adventure and the Quest for Sustainability”. Agricultural History, Volume 8, No. 2: 251.

[xvii] UN. “Report of the UN Conference on Environment and Development”, 1992.

[xxviii] Max Blumenthal. “The Carmel Wildfire Is Burning All Illusions in Israel”. The Electronic Intifada, 6 Dec, 2010.