CJPME Factsheet, Published december 2018: This factsheet discusses the repercussions of Trump's decisions regarding Israel-Palestine and Canada's reaction to Trump's approach.

Factsheet Series No. 211, created: October 2018, Canadians for Justice and Peace in the Middle East
View factsheet in PDF format 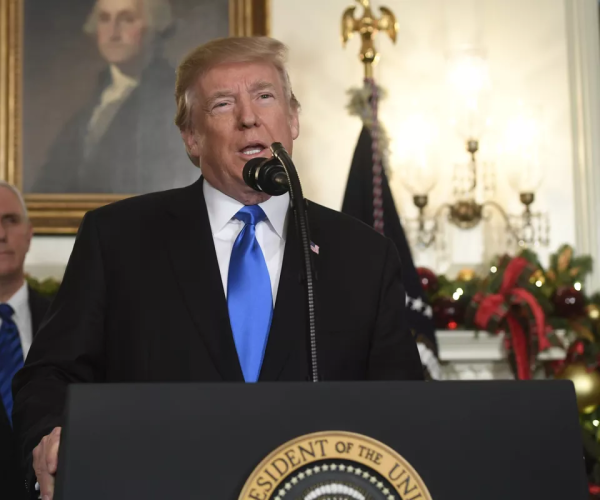 How has Trump bucked international convention on Jerusalem?

UN Resolution 181, adopted in 1947, introduced a partition plan to split Palestine into two states: an Arab state and a Jewish state. The Resolution also mandated the joint administration of Jerusalem as a separate body. Following the 1948 war, Jerusalem was divided; the Eastern side fell under Jordanian rule, while the Western side was controlled by the Israelis.

In the June 1967 war, Israel seized control of the East side of Jerusalem, illegally annexing it shortly after.[1] Since 1967, the UN Security Council has issued over a dozen resolutions denouncing Israel’s illegal occupation of East Jerusalem.[2] The UN General Assembly has also adopted several resolutions condemning the annexation.[3] The vast majority of UN member states and international organizations do not recognize Israeli sovereignty over East Jerusalem, nor do they accept Jerusalem as Israel’s capital.  As a result, it has become international custom for countries to situate their embassies in Tel Aviv or in the surrounding suburbs. The US has long adhered to these norms, irrespective of which political party is in power. Trump’s recognition of Jerusalem as the capital of Israel upends decades of American foreign policy and rejects long-established international convention. Even former American presidents with a reputation for being strongly pro-Israel, such as George W. Bush, took a more tempered approach to the Jerusalem issue.

Trump’s decree on Jerusalem ignores countless UN resolutions, notably Security Council Resolution 478 (1980), which called on all UN members to withdraw diplomatic missions from Jerusalem.[4] Analysts of the Israel-Palestine conflict have long considered Jerusalem to be a “final status issue” in that it will only be resolved through a negotiated settlement. Trump’s move, however, serves to legitimize Israel’s continued occupation of East Jerusalem. It also rewards Israel without demanding any concessions in return, which underscores just how biased Trump’s approach is.[5]

How has Trump abandoned Palestinian refugees?

The Trump administration has effectively abandoned Palestinian refugees through its defunding of UNRWA, the UN aid agency that provides relief and development services to over 5 million Palestinian refugees.[6] UNRWA is funded almost entirely by voluntary contributions from UN member states. The US has long been the most generous contributor to UNRWA’s programmes.  Year after year, they have provided around one third of UNRWA’s overall working budget.[7] In January 2018, the Trump administration slashed its first $125 million installment of the year, providing the organization with only $60 million instead. They explained that their decision to withhold funds was meant to encourage reform within UNRWA, and they suggested that funding may be restored at a later date.[8] However, in late August 2018, the Trump administration announced that it would be cancelling all UNRWA funding. Other forms of aid to Palestinians would also be cut, including $200 million set aside for charities that provide humanitarian services for Palestinians in Gaza and the West Bank.[9] In an attempt to justify these extreme cuts, the Trump administration said that UNRWA is an “irredeemably flawed operation” and that the organization has created a “culture of dependency among Palestinians.”[10] Trump’s decision to defund UNRWA, once again, is a massive departure from long-standing US policy.

Trump’s decision on UNRWA has only served to further alienate Palestinians, who had already withdrawn from negotiations following Trump’s Jerusalem decree..[11] Trump’s defunding of UNRWA underscores his gross misunderstanding of the agency’s mandate. UNRWA has not perpetuated the Israeli-Palestinian conflict, as Trump has suggested. Rather, in the words of UNRWA spokesperson Chris Gunness, “it is the failure of the political parties through negotiations to produce an overall peace agreement and thereby resolve the refugee crisis” that has perpetuated the conflict.[12]

How has Trump scuttled US relations with the Palestinian leadership?

Since 1974, the Palestine Liberation Organization (PLO) has been recognized by the UN as the sole legitimate representative of the Palestinian people. The PLO has always considered East Jerusalem to be the capital of the Palestinian state. This affirmation is even institutionalized in their 1988 Declaration of Independence. Therefore, the PLO regards Trump’s Jerusalem decree as a complete negation of their sovereignty. PLO executives decried Trump’s decision, stating that there will be no peace without a Palestinian capital in East Jerusalem.[13]  Mahmoud Abbas, President of the State of Palestine and Chairman of the PLO, stated that the decree delegitimized the U.S. as an impartial arbiter in the peace process.[14]

In September 2018, the US State Department announced that it would be closing the PLO office in Washington. In an attempt to justify this unexpected decision, National Security Advisor John Bolton cited concerns regarding PLO efforts to prompt an investigation of Israel by the International Criminal Court (ICC).[15] Palestine, a member of the ICC since 2015, has submitted numerous complaints to the court regarding the expansion of illegal Israeli colonies (aka “settlements”) and alleged war crimes.[16] Neither the U.S. nor Israel are members of the ICC, but the Obama administration cooperated with the court nonetheless. The Trump administration, however, has threatened to impose sanctions against the ICC if it pursues an investigation of Israeli actions in the occupied territories. In its statement explaining the closure of the office, the State Department also cited the PLO’s unwillingness to participate in Trump’s ”peace plan” negotiations.[17]  Chief Palestinian negotiator Saeb Erekat condemned the U.S.’ decision to close the office, calling it “collective punishment” by the Trump Administration.[18] It is evident that Trump’s actions over the past year have driven the US-Palestinian relationship to a historic low.

What has been Canada’s response to Trump’s approach?

Canada has yet to challenge or critique Trump’s destructive policies   on Israel-Palestine. Trump’s funding cuts plunged UNRWA into a financial crisis, leaving the organization with a $446 million deficit.[19] At a pledging conference held in New York, over thirty states and organizations were able to raise $122 million in emergency funds to reduce this funding gap, but  Canada was notably absent from this meeting.[20] Finally, in October 2018, the Canadian government announced it would contribute $50 million in funds to Palestinian refugees over the next two years, although it is unclear whether this announcement reflects an actual increase in projected Canadian contributions. Regardless, Canada’s current contributions amount to less than 2% of UNRWA’s overall funding.  It is also important to note that, as the gavel-holder for the UN Refugee Working Group, Canada has a unique responsibility to work toward a permanent solution for Palestinian refugees.[21]

On Jerusalem, the Canadian government chose to abstain from a December 2017 UNGA vote condemning Trump’s Jerusalem decree, calling the resolution “one-sided.” In August 2018, the Conservative Party of Canada held a national policy convention in Halifax where party members passed a resolution recognizing Jerusalem as the capital of Israel and calling Canada to move its embassy from Tel Aviv to Jerusalem[22].  Conservative Party leader Andrew Scheer has promised to recognize Jerusalem as the capital of Israel if he is elected in 2019. The Tories’ stance ignores international law, diplomatic consensus and long-standing Canadian policy on Israel-Palestine.

[19] “UNRWA Statement on Implications of Funding Shortfall on Emergency Services in the OPT.” UNRWA. July 26, 2018.