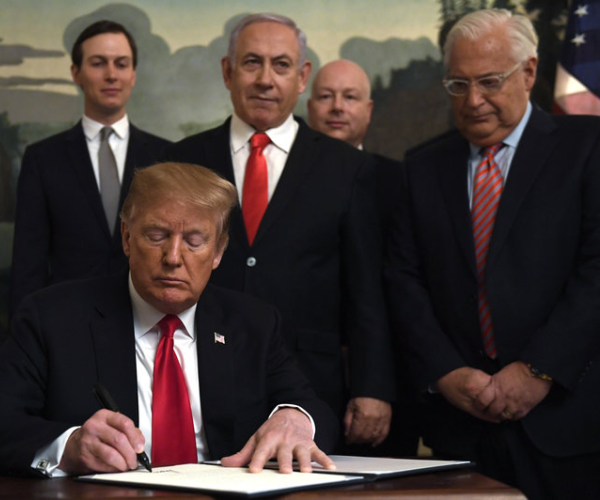 CJPME Factsheet, published April 2019 : This factsheet discusses the repercussions of Trump's decree regarding the Golan Heights and Canada's position on the subject.

Factsheet Series No. 212, created: March 2019, Canadians for Justice and Peace in the Middle East
View factsheet in PDF format

What/Where are the Golan Heights? 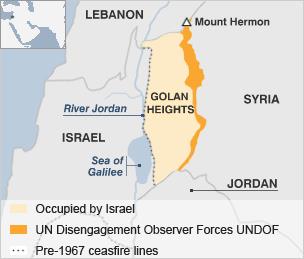 The Golan Heights is a region in the Levant, bounded by the Jordan River and Sea of Galilee in the west, Mount Hermon in the north, the Ruqqad in the east, and the Yarmuk River in the south. When the French mandate of Syria ended in 1944, the Golan Heights became a part of the newly independent Syrian state. During the War of 1967, Israel managed to militarily occupy two-thirds of the Golan Heights from Syria. Almost immediately, Israel began to illegally move Israeli settlers into the region.[1] During the 1973 war, Syrian forces attempted to retake the Golan, but the surprise assault was thwarted by Israeli occupation forces. Both countries signed an armistice agreement in 1974, and a UN peacekeeping force has been placed on the ceasefire line ever since.  In 1981, Israel passed the Golan Heights Law, which extended Israeli law and administration to the Golan—a move that amounted to unilateral annexation.[2]

With the 1967 war, approximately 130,000 Syrians were forcibly evicted from the Golan by Israel.  Today, roughly 26,000 native Syrians remain in the region, mostly of the Druze sect.[3] The Syrians remaining in the Golan have been integrated into a system of subjugation—they are consistently faced with systematic oppression and discrimination at the hands of Israeli laws and practices.[4] The overwhelming majority of native Syrian residents in the Golan have rejected Israeli citizenship, instead maintaining a strong connection with Syria. Meanwhile, Israel heavily subsidizes and incentivizes colony growth in the region. More than 30 illegal Jewish-only colonies (a.k.a. “settlements”) have been constructed on the heights over the past 50 years, with an estimated 20,000 settlers currently occupying the region.[5]

The Golan is strategically significant for both Israel and Syria, seeing as the Heights overlook southern Lebanon, northern Israel, and much of southern Syria. The Heights give Israel an excellent vantage point for monitoring Syrian movements. The Israeli government has also maintained that the Golan’s topography acts as a natural buffer against any military thrust from Syria.[6]

Beyond being a strategic asset, the Golan also provides Israel with resource security. As long ago as 1968, Israel began to enact a series of laws that gave it exclusive access to the Golan’s water sources. The Golan offers access to two major water systems: the Jordan River to the west, and the Sea of Galilee to the south. The Golan is also home to more than 200 springs and countless streams, many of which Israel has impounded in reservoirs for Israeli settler use. In fact, more than one-third of Israel’s water supply comes from the Golan Heights. Israel is currently the 19th most water-stressed country in the world, and this situation is likely to worsen as the effects of climate change intensify.[7] Therefore, Israel has come to regard the Golan Heights as an invaluable asset, often justifying its occupation on its existential “need” for the region’s resources.[8]

What is the legal status of the Golan Heights?

Under international law, the Golan is considered Syrian territory under Israeli occupation. As an occupying power, Israel is bound by the Fourth Geneva Convention, which imposes substantial humanitarian obligations on occupying states. Israel has violated many of these provisions through its forcible deportation of Arab citizens from the Golan, as well as its illegal colonization of the region.

When Israel illegally declared it was annexing the Golan in 1981, the United Nations Security Council (UNSC) passed Resolution 497, which pronounced the Golan Heights Law as being null and void.[9] In addition to this, four separate resolutions pertaining to the Golan have been passed by the UN General Assembly annually since 1996. These resolutions repeatedly affirm the Golan’s status as an occupied territory, and call upon Israel to withdraw.

What is the significance of Trump’s decree on the Golan Heights?

No country in the world had recognized Israel’s control over the Golan Heights—no country, that is, until March 2019. At that point, U.S. President Donald Trump reversed decades of American foreign policy by signing a proclamation officially recognizing Israel’s annexation of the Golan Heights. Trump’s Golan Heights decree, however, does not come out of the blue.  Rather, Trump’s proclamation is merely the latest in a series of one-sided decisions by the US which favour Israel. The Trump administration had recently before recognized Jerusalem as the capital of Israel, moved the U.S. Embassy there from Tel Aviv, and completely defunded the UN agency for Palestinian aid (UNRWA). Set within this context, the Golan Heights decree is merely an extension of Trump’s prejudiced Middle East policy, which seeks to legitimize Israel’s illegal occupation of Arab territories.

Trump’s proclamation was met with swift condemnation from the international community. The EU released a statement on behalf of all 28 union states reaffirming that the EU does not recognize Israeli sovereignty over the Golan Heights.[10] Numerous Arab states, like Saudi Arabia, widely denounced the decision to recognize Israeli sovereignty over the Golan. The UN Security Council also held an emergency session, where members rose individually to condemn Trump’s decree.[11]

Some experts have pointed to the domestic considerations that may be behind Trump’s decision. Seeking re-election in 2020, Trump may be trying to cement the support of evangelical Christians, who make up 25 percent of the U.S. population. For purported religious reasons, the evangelical Christian community in the US blindly supports Israeli interests.  As such, Trump's decree can be seen as part of a larger campaign to establish the Republican Party as the go-to party for pro-Israel voters.[12]

Trump’s proclamation has come at a time when the Syrian government is occupied with its own civil war. With all of its resources – domestically and internationally – devoted to defeating opposition and jihadist groups. Syrian President Bashar al-Assad’s brutality in the civil war has left him with few allies in the region.[13] A weakened and isolated Syrian state thus provides an opportunity for Israel to consolidate its control of the Golan, with U.S. support.

While Trump’s decree will not change facts on the ground, it sets a damaging precedent both within the Middle East and outside. For one, the Trump administration has now paved the way for Israel’s annexation of the West Bank. Trump’s declaration on the Golan, as well as his Jerusalem decree, has proven to Israel that there will likely be no consequences for such a move. Furthermore, legitimizing Israel’s sovereignty over the Golan fundamentally undermines international law and sets a dangerous precedent that may be exploited by other expansionist regimes, like Russia in the Crimea.

What is Canada’s position?

Officially, Canada does not recognize permanent Israeli sovereignty over the Golan Heights, and the other territories occupied by Israel in 1967.[14] That being said, Canada consistently votes against or abstains on key UN resolutions pertaining to the Golan. In response to Trump’s declaration on the Golan, Global Affairs Canada issued a brief statement affirming that its own policy on the Golan will remain unchanged.[15] Despite Canada’s purported support for international law, this statement did not actually condemn Trump’s decree, nor did it call upon Israel to withdraw from the Golan. If Canada is truly committed to a just and lasting peace in the region, it must continue to push for a just settlement that complies with international law. In the absence of negotiations between Israel and the Palestinians, Canada must vocally condemn all Israeli violations of international law.