Factsheet Series No. 213, created: May 2019, Canadians for Justice and Peace in the Middle East
View factsheet in PDF format

WHAT DID NETANYAHU THREATEN DURING ISRAEL'S APRIL, 2019 ELECTIONS?

A mere three days prior to Israel’s April 9, 2019 elections, incumbent Prime Minister Benjamin Netanyahu vowed to annex Israeli settlements in the occupied West Bank if given a fifth consecutive term. Netanyahu repeated this promise in numerous interviews with domestic media ahead of the polls, adding that Israel would “continue to control the entire territory west of the Jordan River.”[1] “Settlements” are segregated colonies inhabited solely by Jewish Israeli citizens, most built on land within the Palestinian territories, which Israel has militarily occupied since 1967.[2] As a result of these illegal settlements, the nearly 2.5 million Palestinians living in the West Bank are continuously pushed into ever-smaller enclaves. As of the beginning of 2018, there were 131 government-sanctioned Israeli settlements in the West Bank, as well as approximately 110 settlement “outposts.” [3] [4] Overall, there are more than 600,000 Jewish Israeli settlers occupying the West Bank and East Jerusalem. [5]

Annexation has long existed de facto in the West Bank, with Israel increasingly occupying Palestinian land through unrestricted settlement expansion. In annexing the West Bank, or parts of it, Netanyahu would simply be formalizing this situation.

Given Israel’s elections, Netanyahu’s annexation promise is almost unsurprising. Many have argued that his announcement was largely an attempt to co-opt the far-right ahead of a tight election. By speaking the language of annexation, Netanyahu hoped to mobilize conservative Israelis to vote for Likud instead of other right-wing parties. It was also an attempt to galvanize support from smaller pro-settlement and ultranationalist parties whom Netanyahu would need on-side in order to form a coalition government. [6]  Furthermore, this promise comes merely two weeks after Trump recognized Israel’s illegal annexation of the Golan Heights. Since coming into office, Trump has given Netanyahu one long-desired prize after another: he pulled out of the Iran nuclear deal, moved the U.S. Embassy to Jerusalem, and recognized Israel’s sovereignty over the Golan Heights.[7] These moves seem to have merely emboldened Netanyahu, suggesting that Trump will support any Netanyahu decision, regardless of the UN stance or international law. 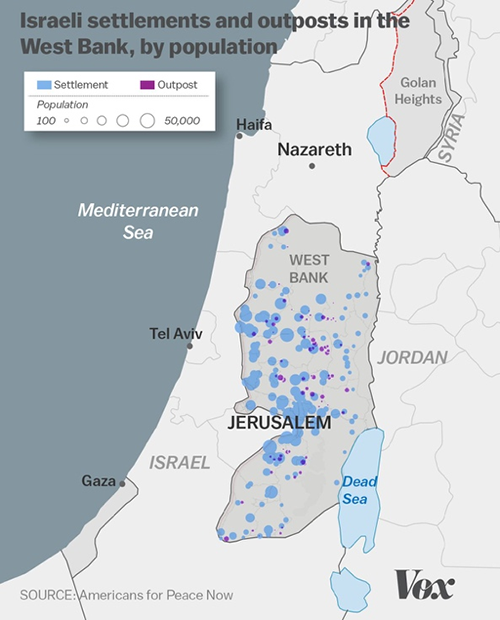 No.  After the 1967 War, Israel occupied East Jerusalem and the West Bank, and almost immediately began to build illegal settlements for Jewish Israelis on this territory. These settlements violate the Fourth Geneva Convention, an instrument of international law that prohibits a country from transferring its population into a militarily occupied territory.[8] Furthermore, the extensive appropriation of land and destruction of property required to build and expand settlements also breach other rules of international humanitarian law.[9] In addition to this, Israel’s settlement activity amounts to a war crime under the Rome Statute of the International Criminal Court. Its extensive appropriation and destruction of Palestinian property in the occupied territories is considered “pillage” and is illegal under the Rome Statute.

The United Nations has repeatedly upheld the view that Israel’s illegal colonization of these territories violates international law. UN Security Council resolutions 446 (1979) and 465 (1980) both state that Israeli settlements in the occupied territories are a violation of the Fourth Geneva Convention.[11] In December 2016, the Security Council passed Resolution 2334, which stated that Israel’s settlement activity constitutes a flagrant violation of international law and has no legal validity.[12]

WHAT ARE THE IMPLICATIONS OF ANNEXING PORTIONS OF THE WEST BANK?

Implications on the Peace Process: Israeli annexation of any West Bank territory would be a renunciation of the very premise behind a two-state solution: that the final status of the West Bank be determined through Palestinian-Israeli negotiations. Should the settlements be annexed, Palestinians would essentially be left with an archipelago of disconnected territory. There would be no hope for a Palestinian state, as there would be no contiguous land on which to create one.  Such a move would also undermine any residual Palestinian faith that Israel could be trusted in negotiations.

Inevitable Apartheid Result: In moving ahead with annexation, Israel would subsume the West Bank without granting its Palestinian residents basic rights, such as the right to vote in Israeli elections. Even now, Israeli laws and policies in the Wests Bank institutionalize a system of racial discrimination and domination, which affects Palestinians’ freedom of movement, housing, education, employment, and other basic rights.[13] Under annexation, Jewish Israelis and Palestinians living in the West Bank would be subject to separate legal regimes, with Palestinians living in Bantustans and being treated as legally inferior – the very definition of apartheid.

The Future of Israel: Israel has long claimed on the world stage that it is the “only democracy in the Middle East.”[14] While this has never been true, annexation would make it significantly more difficult to maintain the illusion of democracy. Under annexation, Palestinians in the occupied West Bank would be ruled as a separate, legally inferior population with no political rights. No serious individual could possibly consider Israel a liberal democracy—or a democracy of any kind, really—given such a two-class political system.

HOW SHOULD CANADA RESPOND?

The international community has remained largely silent on Netanyahu’s annexation vow, with only the Arab League publicly condemning Netanyahu’s comments.[15] Prime Minister Trudeau congratulated Netanyahu on his win, but did not comment on his annexation plans.[16] This, despite having an official policy which does not recognize Israeli sovereignty over the West Bank, and which views Israeli settlements as a violation of the Fourth Geneva Convention.[17] It is important that Canada take a principled stance and publicly condemn Netanyahu’s vow to annex the West Bank. Should Netanyahu make any more efforts toward annexation, Canada must stand on the side of international law and uphold its own official policy by vocally opposing such moves.

[2] The United Church of Canada. (n.d.). What are Israeli settlements?

[4] Note: Settlement outposts are settlements that do not have official government recognition, although many are established with government assistance. Outposts tend to be smaller than regular settlements.

[10] The United Church of Canada. (n.d.). What are Israeli settlements?

[14] White, B. (March 11, 2019). “Israel is the only democracy in the Middle East? Netanyahu’s comments have shattered that illusion.” The Independent.

[17] Government of Canada. (n.d.). Canadian policy on key issues in the Israeli-Palestinian conflict.