CJPME Factsheet No. 214, published December, 2019: This factsheet provides an overview of the 2019 Algerian Popular Protests, describing why Algerians are hitting the streets in weekly anti-government protests while outlining both the Algerian and Canadian governments' reaction to the movement.

Factsheet Series No. 214, created: December 2019, Canadians for Justice and Peace in the Middle East
View factsheet in PDF format 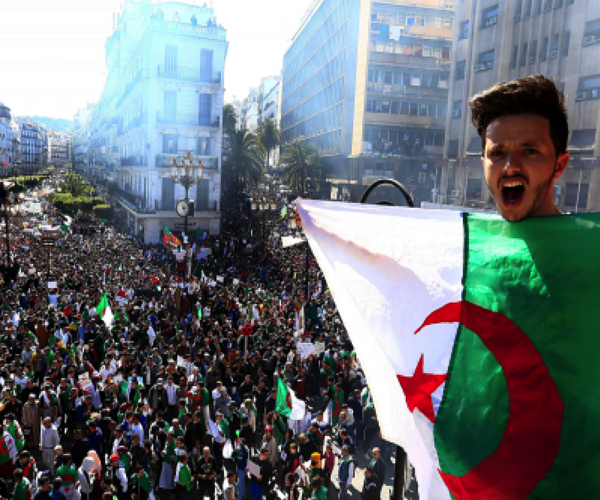 Why did Algerians start protesting in February 2019?

The Algerian popular protests started on February 16 2019[1] after former President Abdelaziz Bouteflika announced that he was running for a fifth consecutive term in office[2]. Known as “Hirak” in Arabic, the peaceful protest movement originally launched with a call for the resignation of President Abdelaziz Bouteflika. The 82-year-old leader who was elected in 1999 suffered a stroke in 2013 and has rarely been seen in public since then, failing to make a public speech in nearly seven years.[3] Bouteflika announced his intention to run for a fifth term on February 10 2019, in a statement to the nation carried out by the state news agency, Algeria Press Service.[4] Following the announcement, protesters started calling on Bouteflika to resign, stating that the president’s health did not allow him to carry out his function, citing Article 102 in the Algerian constitution, which states that: “when the President of the Republic, because of a serious and lasting illness, is totally unable to perform his functions, the Constitutional Council shall meet de jure and, after having verified the reality of the impediment by all appropriate means, it shall propose, unanimously, to Parliament to declare the state of impediment”. [5]

After five weeks of protests, Abdelaziz Bouteflika resigned on April 2nd, 2019, due to his incapacity to execute his duties as president – in accordance with Article 102 – ending his twenty-year rule. However, since Bouteflika’s resignation, the same regime has remained in place and has actually increased its repression of Algerian protesters, in trying to force Algerians to accept a regime-led transition. [6] Nonetheless, protestors have refused to accept the proposed political transition as Algerians continue to look for more comprehensive democratic change.[7]

Why are Algerians still hitting the streets after the President’s resignation?

Despite Bouteflika’s resignation, millions of Algerians have continued to hit the streets every Friday in key, symbolic locations all over the country. The demands of the people have evolved throughout the duration of the protests, with Algerians now calling for radical reforms and a reshaping of the entire governing system.[8] On September 15, the date for Algeria’s next presidential election was set for December 12th. Following this announcement, Algerians renewed their protests in several cities, this time rejecting the new elections, accusing leaders of widespread corruption and state repression, and demanding “a more pluralistic and inclusive framework to prepare for free elections”.[9][10] The protests have grown stronger overtime with massive demonstrations calling for the expulsion of the establishment in place. Indeed, protesters argue that electing a new president under the current system of governance would simply put another face on the same authoritarian regime in the country.[11] Thus, in order for the next election to be transparent and fair, there must be the establishment of a real democratic system, radical political reforms and the departure of the ruling elite.[12]

What has been the Algerian government's reaction to the protests?

At the start of the movement in February 2019, Algerian authorities tolerated the protests. However, by April 2019, authorities started reacting more firmly by trying to crush all possible protests in Algiers, particularly the ones led by students, with the exception of Friday demonstrations.[13] Since June 2019, authorities have clamped down even stronger, escalating their campaign of repression by targeting political opposition, journalists and citizens, “using water cannons, tear gas canisters, rubber bullets and sound bombs, as well as arresting some protest leaders.”[14] For example, Lakhdar Bouregga, a veteran of Algeria’s independence war was arrested after merely criticizing the army.[15] Since September 2019, the authorities have intensified their violent crackdown on protesters, raising serious concerns among human rights organizations. According to the Algerian League for the Defense of Human Rights (LADDH), since September 2019, more than a hundred pro-democracy protesters have been arrested and detained[16] on what Human Rights Watch (HRW) has called “dubious” and “vague” charges such as “harming national unity” and “undermining the morale of the army” [17]. Indeed, Amnesty International (AI) issued a warning back in September 2019 against the crackdown on Hirak protests: “The resumption of sweeping arbitrary arrests targeting groups of political and other civil society activists is a clear indication that the right to freedom of assembly and expression in Algeria is still very much under threat.” [18] Under international law, the Algerian regime’s brutal repression of civilians is a clear violation of the rights to freedom of expression and assembly that are enshrined in Articles 19 and 20.1 of the Universal Declaration of Human Rights.[19]

What is Canada's response to the protests?

Concerning the 2019 Algerian popular protests, while Global Affairs Canada issued a March 2019 statement supporting “democratic, free and fair elections in Algeria” and wishing “peace, stability and prosperity for its people,”[20] the Trudeau government has since been silent. Trudeau has in fact passively supported the authoritarian regime by approving the sale of at least $12 million in Canadian-made military arms and ammunition to Algeria in the summer 2019. [21] This deal happened only a few weeks before Canada ratified the United Nations Arms Trade Treaty (ATT) in September 2019, prohibiting the sale of military weapons to human rights abusing countries. Indeed, the latest data available from Statistics Canada shows that, during the weeks of June and July, Canada sent “more parts and accessories of military arms and ammunition to Algeria than in the previous 10 years combined”.[22] Project Ploughshares and other international human rights organizations have raised great concerns about Canada’s arms sales and Global Affairs Canada’s Report on Exports Military Goods (2018).[23]

[5] See Article 102 of The Constitution of the people’s Democratic Republic of Algeria. Edition 2016. http://www.conseil-constitutionnel.dz/pdf/Constitutioneng.pdf