Factsheet Series No. 219, Created: March 2020, Canadians for Justice and Peace in the Middle East

Factsheet Series No. 219, created: March 2020, Canadians for Justice and Peace in the Middle East
View factsheet in PDF format 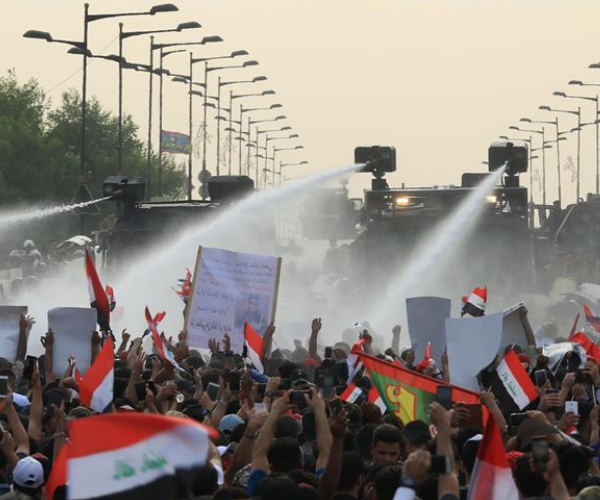 When did the protests started in Iraq?

Beginning on October 1, 2019, protest movements have risen in Iraq against the government. While the first wave of these protests lasted only 6 days (until October 6), they picked back up on the evening of October 24 after the end of the Arba'een pilgrimage[i]. By November 1, tens of thousands of demonstrators were demonstrating in Tahrir Square in Baghdad and on November 4, a general strike was organized. The waves of protests subsided during the first weeks of December but then surged again on Dec. 22nd. Since then, sit-ins and protest movements have continued, often related to the crisis between Iran and the United States.

The protests emerged initially near the capital Baghdad, but then spread to the rest of the country: first in the Shiite regions of the south of the country (especially in the cities of Nassiriya and Diwaniya[ii]) then in the Sunni regions of the north of the country starting in early December (in the cities of Falluja, Tikrit or Mosul, the movement remains more limited[iii]). While the demonstrators come from different social backgrounds, they are mostly young [iv].

While rooted in a broader context of dissatisfaction with the Iraqi state, these protest movements – laregely organized on social media – were triggered by a specific event. On September 27, the Prime Minister of Iraq announced the transfer of the commander of the Iraqi Counter-Terrorism Service, Lieutenant-General Abdel-Wahab al-Saadi, to the Ministry of Defense, a move that many saw as a demotion influenced by pro-Iranian interests[v].  It was also largely seen as an act of disrespect towards one of the main leaders in the liberation of Mosul from the Islamic State.[vi]

What are the demands of the protesters?

In a word, the demonstrations are “anti-establishment.”[vii] Iraqis are protesting against corruption, unemployment and the dire state of public services in the country, currently experiencing chronic shortages of electricity and clean water. The Iraqi economy is strongly marked by youth unemployment. 40% of young people are not employed, and not in school or any other type of training[viii]. According to Transparency International, in 2019 Iraq is the 18th most corrupt country in the world.[ix] If earlier demonstrations initially called for reforms and a simple change of government, they now demand the departure of an entire political class and a fundamental change to the constitution.

The non-partisan feature of the demands is relatively new in Iraq[x], a country nevertheless split by strong socio-political divisions (especially between Shiites and Sunnis) and characterized by a confessional political system.[xi] For Zaynab Olyabek, from the International Institute for Strategic Studies, "The current demonstrations are spontaneous and decentralized, without leader or specific party".[xii] According to Adel Bakawan, sociologist and director of the Center for Sociology of Iraq (CSI), "For the first time since 2003, the protest movement is neither ethnic nor confessional”.[xiii] It’s important to point out that the participation from the Sunni population remains less massive than in the rest of the country.  This is attributed to the fact that their involvement could be discredited and associated with a form of nostalgia for the previous regime of Saddam Hussein or of complicity with the recently defeated Islamists of ISIS.[xiv]

Beyond these political demands, the demonstrators also reject any form of interventionism, both on the part of Iran and also on the part of the United States. Indeed, the Iranian Islamic Revolutionary Guards intervened to fight against Sunni armed groups during the various civil wars that Iraq experienced.  Nevertheless, they have remained in Iraqi territory since 2014, and have been busy organizing Shiite militias and interfering in Iraqi domestic politics.[xv] Since October, Iraq’s popular protests have taken on a clear nationalist vocabulary.[xvi] On January 3, 2020, the extrajudicial assassination of Iranian general Qassem Soleimani by an American strike at Baghdad’s airport was welcomed by many protesters.[xvii]  And in the southern cities of Basra and Nassiriya, demonstrators violently sought to refuse the passage of a funeral procession in homage to Soleimani.[xviii]

What was the government’s reaction?

Very early on, the demonstrations because the target of repressive measures from the government. As of October 2, 2019, Internet connectivity started being restricted in order to hinder the organization of rallies (e.g. blocked access to social media platforms), jeopardizing freedom of expression and association.[xix] More importantly, the government of Prime Minister A. Abdul-Mahdi opted for an extremely violent and repressive response. At the beginning of October, clashes between the security forces and the demonstrators left about 100 people dead and more than 4,000 injured in just 5 days, mostly by live bullets . Since October, at least 470 people have been killed. The repression also involves a campaign of intimidation, assassinations and the kidnapping of activists – leading to even greater public outrage.[xx] The violence is also reinforced by the involvement of armed militias, often pro-Iran, in the clashes.[xxi]

In response to the protesters' demands, the government announced on October 6 that it wanted to implement new social measures (e.g. housing aid, subsidies for young unemployed people). However, the governing coalition, which has been in power since May 2018, is weak and instable because of shifting alliances. For instance, early in the protests, the Shiite leader Moqtada al-Sadr initially expressed his support for the demonstrators and the call for the resignation of the government.  Al-Sadr was a member of the governing coalition and leader of the party performed best in the last legislative elections. Moqtada al Sadr has great political influence in Iraq but plays an ambiguous and versatile role, between populism and opportunism. However, on January 24, he announced that he was ending his support for the protests and would subsequently support the government proposal of the new Prime Minister Mohammed Allaoui (who came to power on February 1, 2020 after the resignation of his predecessor on November 29).

What was the reaction of the international community?

In general, the response of the international community has focused on condemning the violence. In November, the United Nations and the Office of the United Nations High Commissioner for Human Rights repeatedly expressed deep concern over the crackdown on protests and stressed the inappropriate role of militias in the escalation of violence in Iraq.[xxii] The UN Secretary-General also reminded the Iraqi authorities of their obligation to protect diplomatic and consular personnel and facilities, in particular after attacks on the Iranian consulate in the city of Nadjaf[xxiii] and against the American ambassy.[xxiv]

Both Iran and the US share responsibility for the current chaos and discontentment in Iraq. But for Maria Fantappie, an Iraq specialist from the International Crisis Group, both Iran and the US nevertheless have an interest in preserving a semblance of stability in Iraq.  Iran wants to continue to trade with Iraq (and counter the economic sanctions imposed by Washington), and the US wants to avoid the resurgence of the Islamic State.[xxv]

[i] Main Shiite pilgrimage, which generally takes place in October, to commemorate the martyrdom of Imam Hussein during the Battle of Karbala in 680.

[x] Demonstrations had taken place in 2015 and 2016 like the Green Zone Movement, or even in the summer of 2018, with similar anti-government demands, but they had generally only succeeded in mobilizing a part of the population, mainly Shi'a, and had often been appropriated by the Sadrist movement of Moqtada al-Sadr.

[xi] The muhasasa was introduced by the United States after the invasion of Iraq in 2003. It is a system of proportional representation via quotas for the different ethno-sectarian groups in Iraq (Sunnis, Shiites, Kurds) and theoretically contributes to distributing the public functions, the political positions and the resources of the State according to ethno-sectarian lines between the parties which compose the ruling class of the country. This system is the target of much criticism by the demonstrators. See Arwa Ibrahim, « Muhasasa, the political system reviled by Iraqi protesters », Al Jazeera, December 4, 2019.

[xv] The release of The Intercept's report on Iranian influence in Iraq on November 18, based on internal documents of Iranian intelligence services, has reinforced this popular discontent. See Risen, James (and others), "A Spy Complex Revealed", The Intercept, November 18, 2019.

[xvi] With slogans advocating an autonomous Iraq, such as "we want our country", "no to Iran, no to America", "we want a homeland" or "Iraq will remain free".

[xxi] Such as the Hachd al-Chaabi coalition, which gathers between 60 and 70 militias, mainly Shia, armed and financed by Iran.