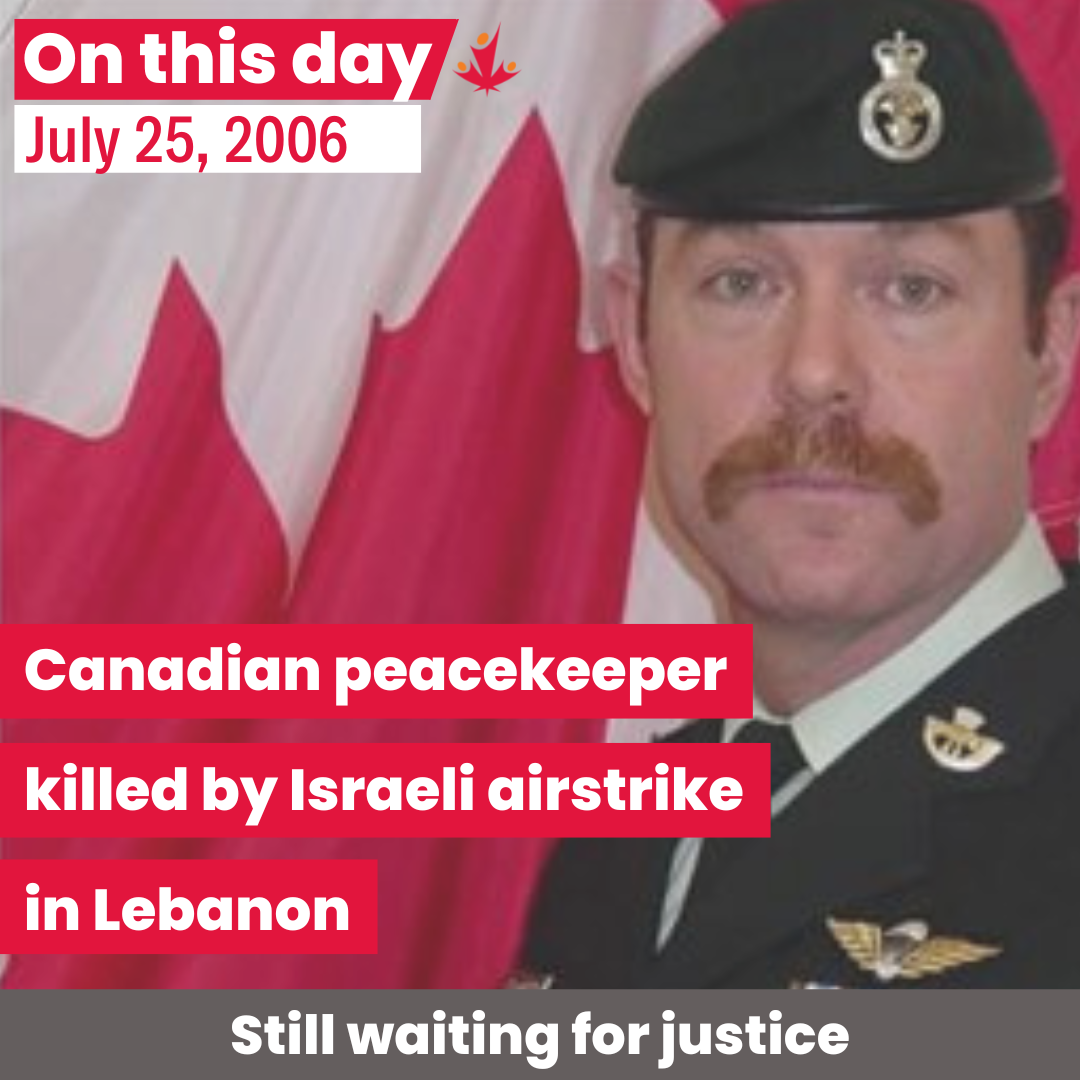 "It just is not OK to bomb a UN post; there just isn't a good reason. Canadians need to speak out, they need to write the prime minister and demand he get answers, because we send peacekeepers all over the world and they need to know they will be protected.” - Cynthia Hess-von Kruedener, widow of Canadian peacekeeper killed by Israeli airstrike.

On this day in 2006, Canadian peacekeeper Major Hess-Von Kruedener was killed by an Israeli airstrike in Lebanon. Hess-Von Kruedener was stationed at a UN patrol base in Southern Lebanon to observe the armed conflict during Israel’s invasion of the country. For six hours on July 25, Israel launched three successive waves of attacks on the UN patrol base with bombs and artillery fire, and continued this assault despite repeated pleas from the UN commander that “you [Israelis] are killing my people.” As UN personnel were preparing plans to evacuate, an Israeli airstrike dopped a 500-kg satellite-guided ‘bunker-buster’ bomb on top of the patrol base, killing Hess-Von Kruedener and three other UN peacekeepers.

UN Secretary General Kofi Annan called Israel’s destruction of the UN patrol base an “apparently deliberate act,” and Hess-von Kruedener’s widow Cynthia suggested that he may have been intentionally targeted by Israel due to his role in reporting Israeli war crimes. However, Prime Minister Stephen Harper expressed doubt that Israel would intentionally target a UN post, and even suggested that the peacekeepers were to blame for their own deaths by remaining in their post.

Several months later, Canada convened a “Board of Inquiry” (BOI) to investigate the events surrounding Hess-von Kruedener’s death. Israel refused to fully cooperate with the investigation. In February 2018, the BOI published its report concluding that the Israeli military was indeed responsible for his “tragic and preventable” death of Hess-von Kruedener, but made a deeply flawed assumption that the incident must have been an “operational error” by Israel. The Canadian government decided not to push Israel for accountability over this egregious attack, and nobody has ever been held responsible for this crime.

Canada’s Board of Inquiry Report