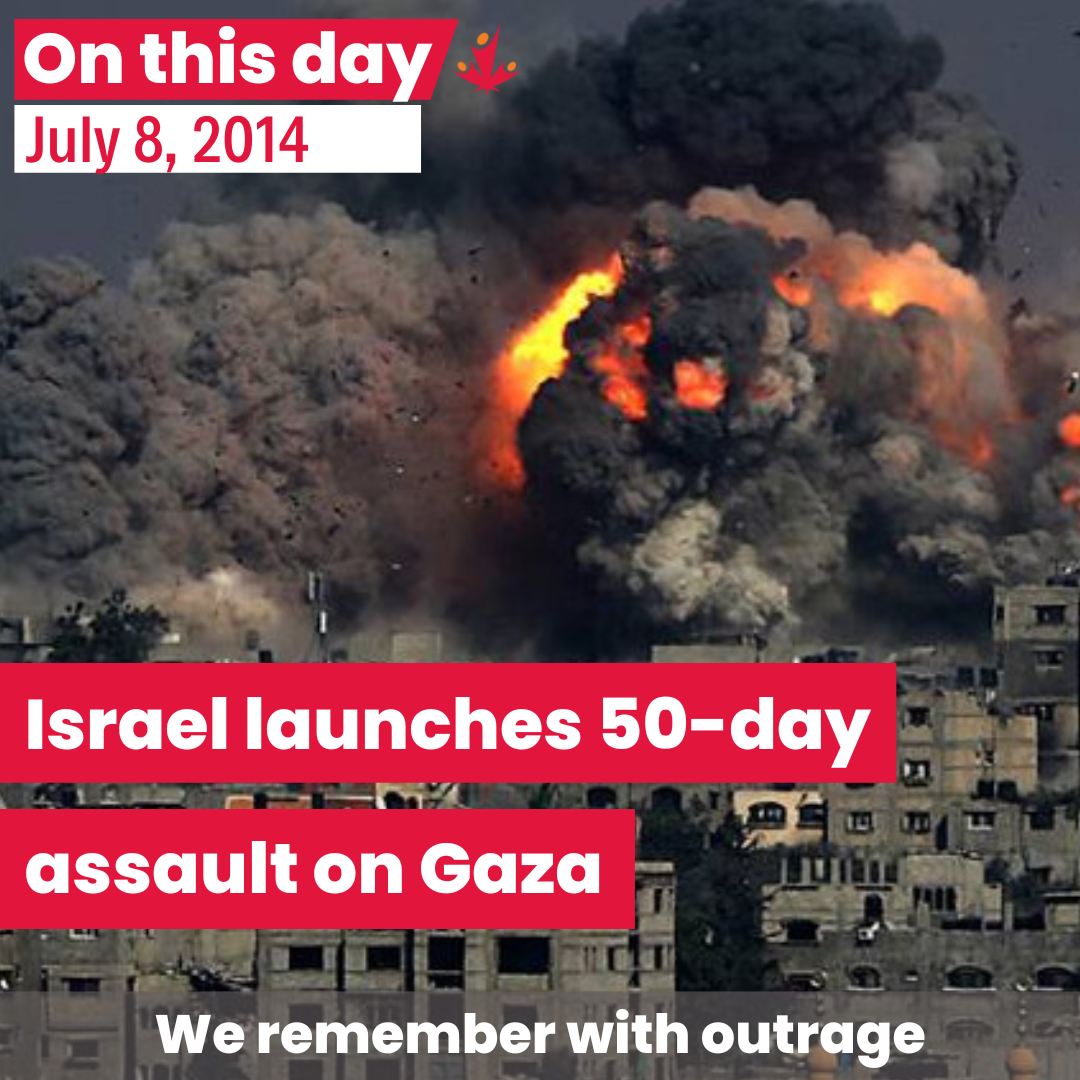 “The extent of the devastation and human suffering in Gaza was unprecedented and will impact generations to come” - Justice Mary McGowan Davis, chair of the United Nations Independent Commission of Inquiry on the 2014 Gaza conflict

On this day in 2014, Israel launched a 50-day war on the occupied Gaza Strip. This was Israel’s third military offensive on Gaza within seven years, and it lasted for 50 days straight, from July 8 to August 26. Within the first 48 hours of the offensive, Israel dropped 400 tonnes of bombs on Gaza, and over the next two months, Israel launched over 6,000 airstrikes. Over 2,251 Palestinians were killed (including 551 children and 299 women), and 11,231 were injured (3540 women, 3,436 children).

The scale of the devastation in Gaza was immense. According to the UN, over 500,000 Palestinians (around 28% of the population) were displaced by the war, and Israeli forces destroyed over 18,000 homes leaving over 100,000 people homeless. Electricity outrages lasted over 18 hours a day, and only 10% of the population received water once a day. The UN agency for Palestinian refugees, UNRWA, concluded that roughly one-third of children in Gaza have lifelong disabilities.

Israel’s conduct during the assault was strongly condemned by UN experts and human rights groups. A United Nations Commission of Inquiry found that both Israeli airstrikes on civilian targets and Palestinian militants’ indiscriminate use of rockets may have amounted to war crimes. Human Rights Watch has accused Israel of using disproportionate force and committing human rights abuses against the civilians of Gaza. However, despite the overwhelming evidence of Israeli war crimes and human rights abuses, the Canadian government gave its uncritical support to Israel at the time, with Prime Minister Stephen Harper stating that “Canada is unequivocally behind Israel.”

The 2014 assault was a deeply traumatic event, and Palestinians still suffer the consequences. In one horrifying case, a man woke up in a hospital to learn that an airstrike had killed 19 members of his family. As he told the UN Commission of Inquiry, “We all died that day, even those who survived.”

The 2014 Gaza War (Chronology) – Interactive Encyclopedia of the Palestine Question

The 2014 Gaza War: An Asymmetric Draw – Interactive Encyclopedia of the Palestine Question