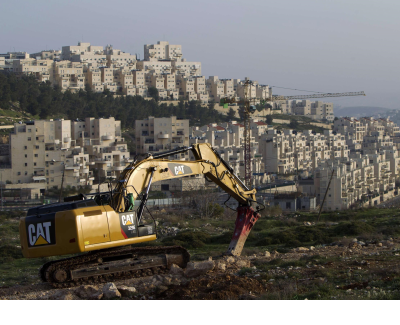 Montreal, November 4, 2013  — Canadians for Justice and Peace in the Middle East urges both the Harper government and the Opposition parties to take a strong stance against the dramatic wave of settlement expansions announced last week by Israel. According to Israeli newspaper Haaretz, the settlement approvals include both implementation of previously expansion plans plus completely new initiatives. “If Canada’s federal parties are still committed to the ‘two-state solution’ to the conflict, or indeed to any negotiated solution, they must vigorously oppose these plans,” warns CJPME President Thomas Woodley. Although both the US State Department and the UN Secretary General condemned the plans, announced October 30, Canada has remained silent. CJPME reminds MPs that establishing settlements in the occupied Palestinian territories violates international law.

“Sadly these most recent announcements entrench the impression that, rather than being serious about reaching a negotiated settlement with the Palestinians, the Israelis simply want to illegally confiscate more Palestinian land, and displace the Palestinians living there,” concluded Woodley.  The wave of announcements provoked an internal crisis in the PLO, with senior PLO officials threatening to resign if the PLO did not pull out of peace negotiations. However, although the PLO’s peace negotiators condemned the announcements, they have not yet followed through on threats to pull out of the US-sponsored negotiations.