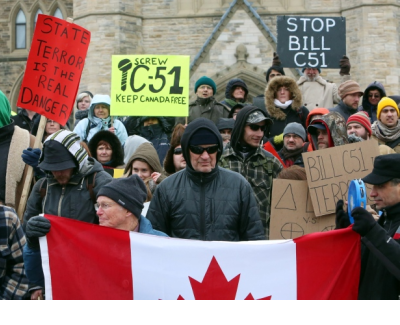 Montreal, February 23, 2015 — Canadians for Justice and Peace in the Middle East urges caution in regards to the Conservative government’s new anti-terror legislation, known as Bill C-51. The legislation proposes lowering the threshold for arrest, criminalizing the promotion of terrorism, expanding the no-fly list, and allowing the Canadian Security Intelligence Service (CSIS) the ability to disrupt and counter-message suspected terror activity. While the Harper government has promoted the bill as way to protect Canadians against “violent jihadism,” many are arguing that the legislation unduly curtails Canadian freedoms and privacy.

Although CJPME strongly opposes violent extremism in all its forms, it believes that the phrasing of the legislation is far too vague to allow for adequate protection of civil liberties. For example, the law prohibits activities that “undermine the security of Canada,” with the only exception being lawful protest or dissent. Nevertheless, there is currently a legal gray area regarding lawful protest in certain jurisdictions in Canada.  For example, the legislation could affect peaceful protest by Aboriginal groups, or others who may not adhere to local bylaws regarding assembly, as was the case during Quebec’s student protests in 2012.  Thus, in the wrong hands, the bill could easily become a tool to outlaw unwanted protest.

Furthermore, the bill prohibits Canadian activities which may “undermine” or “threaten” the security of another state.  Such a provision could have dire implications for diaspora groups denouncing repressive regimes elsewhere in the world. As CJPME President Thomas Woodley said today, “Given the vagueness in the proposed law, it would be very easy for the government to crack down on legitimate criticism of another state, simply by declaring such criticism a ‘threat’ to that state.”  CJPME points out how such a law could easily be used to stifle key Canadian freedoms and liberties.

Finally, existing laws largely cover many of the proposed anti-terror elements contained within Bill C-51, with the only new additions appearing to be undue limits on Canadian freedoms.  CJPME agrees with others who argue that Canadian intelligence services have historically been successful at thwarting terrorist attacks, such as the planned attack on a VIA Rail train earlier this month. As such, CJPME opposes the legislation as currently tabled and will be monitoring to see whether proposed amendments can provide greater protection of Canadians’ civil liberties.