CJPME: Boycott of Israel is Fair, Legitimate and Necessary 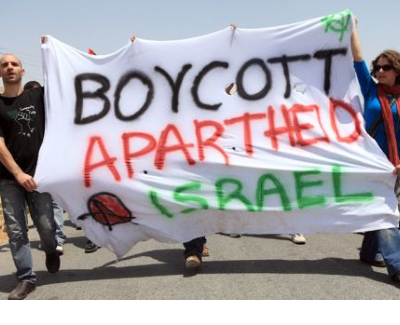 Montreal, May 12, 2015  — Canadians for Justice and Peace in the Middle East (CJPME) repudiates the Harper government’s threat to use “hate crime” laws against BDS activists, as suggested in a CBC article yesterday.  BDS stands for “Boycott, Divestment and Sanctions” and is a movement to put economic pressure on Israel to – among other aims – stop its unlawful colonization of Palestinian territories.  Like CJPME, many Canadians would view legal action by the Harper government as an attempt to silence legitimate criticism of Israel’s violation of Palestinian human rights and international law.

The call for economic action against Israel (i.e. BDS) was initiated in 2005 by 170 Palestinian civil society organizations and has since proven to be an effective tool for change. Netanyahu’s right-wing Israeli government has acknowledged the effectiveness of the BDS movement, and is implementing strategies to try to obstruct the continued progress and expansion of the movement.  Grassroots support for the international movement is quite significant as people around the world grow impatient with the half-hearted diplomatic attempts to arrive at a just peace between Palestinians and Israel.  Canadians for Justice and Peace in the Middle East (CJPME) long ago endorsed BDS, which it considers a legitimate means of non-violent protest and pressure grounded on principles of international law.

According to the CBC article, Public Safety Minister Steven Blaney “conflated boycotts of Israel with anti-Semitic hate speech,” making it evident that under the Harper government Canadians who question or condemn Israel’s actions could automatically be accused of bigotry. CJPME points out that BDS is neither “anti-Israel” nor “anti-Semitic,” since it does not target the Jewish people but rather Israel’s illegal behaviour. In fact, CJPME argues, the BDS movement challenges Israel simply to live up to the international conventions that it has already signed.

“Threatening hate charges against activists represents the latest move by the Harper government to intimidate people who dare to question Israel’s violations of international law,” asserted Thomas Woodley, President of CJPME. This past January, Canada’s former Foreign Affairs Minister John Baird signed a “memorandum of understanding” with Israeli authorities pledging to combat BDS. Both of these actions are highly unsettling, since the Canadian Charter of Rights and Freedoms enshrines the right to free expression.  “Such threats by the government are very alarming,” continued Woodley, “but would be hard to justify legally before a Canadian court.”