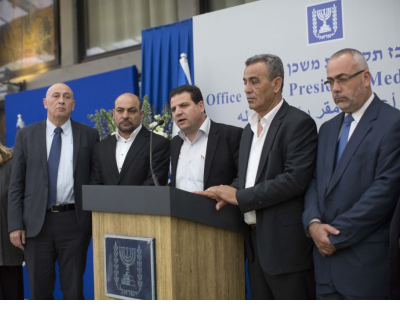 Montreal, February 11, 2015  — Canadians for Justice and Peace in the Middle East (CJPME) condemns the Israeli parliament’s decision to suspend three Palestinian members of parliament (MKs.)  Monday, Israel’s parliament (i.e. the Knesset) banned three Palestinian MKs from parliamentary activity for several months after they met with the families of Palestinian assailants who were killed by Israeli forces. Palestinian MKs Hanin Zoabi and Basel Ghattas were suspended for four months while Jamal Zahalka was suspended for two months.  CJPME also calls on Canadian parliamentarians to condemn this decision as discriminatory and undemocratic.

Prime Minister Benjamin Netanyahu launched the campaign to suspend the Palestinian Knesset members, asking the attorney general to suspend them for “going to comfort the families of murderers.” The three Palestinian lawmakers will be barred from attending committee meetings andthe Knesset plenum until the end of the winter session, but will still be able to vote.  The legislators’ political party, the Joint Arab List insisted that the parliamentarians had visited the families of the Palestinian attackers solely as part of an effort to secure the bodies for burial.

“Canada should condemn the vindictive, undemocratic and unethical campaign led by Netanyahu which prompted the committee’s decision to suspend the MKs,” asserted Thomas Woodley, president of CJPME.  “Anger at the MKs who met with the families obscures the real and ongoing issue of Israel’s holding of assailants’ bodies and preventing their burial,” added Woodley.  The Joint Arab List said in a statement that the burying of the dead is a human and religious duty, shared by all three major religions in Israel, and therefore characterized the efforts to return the bodies as “perfectly legitimate regardless of the circumstances of the death” and assured that the ban would not deter their campaign to return the bodies.

Also on Monday, the Netanyahu government tabled legislation that would allow 90 Knesset members—of the 120 in the House—to suspend colleagues for “unseemly behaviour.” Opposition parties said the planned law constituted a “breach of Knesset procedures,” and the “start of a slippery slope” in which MKs “from left and right will be kicked out for purportedly inappropriate behaviour.” Arab lawmakers described the new law as an effort to “delegitimize Arab Knesset members and restrict the scope of their political action.”