CJPME President waits to be Condemned by Trudeau Government 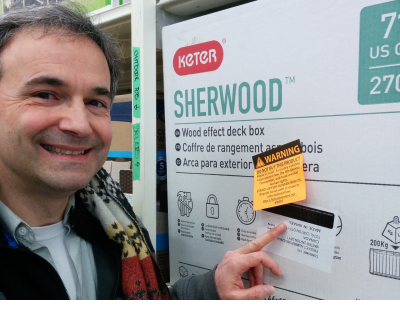 Montreal, February 23, 2016  — In light of the passage of Parliament’s “anti-BDS” motion on Monday, the President of Canadians for Justice and Peace in the Middle East (CJPME), Mr. Thomas Woodley, announced that he awaits his condemnation by the Trudeau Liberals.   “I’ve realized that being condemned by Canada’s government, merely for supporting the human rights of Palestinians, might be the most admirable thing I’ll accomplish in my life,” wrote Woodley in a letter to the government, as he awaited news of his condemnation.  As leader of a non-profit actively promoting BDS (boycott, divestment and sanctions against Israel) as an economic tool to encourage Israel to respect the human rights of Palestinians, Woodley assumes he is near the top of the list for condemnation.

“In its motion, Parliament committed to ‘condemn any and all attempts’ by Canadian ‘organizations, groups or individuals’ to promote the BDS movement,” (italics added) explained Woodley, “so I’m guessing I’m near the top of their hit list.”  Woodley expressed some confusion, however, as to why he was being condemned.  Woodley’s letter highlighted how the three stated goals of the BDS movement align virtually perfectly with Canada’s official principles on the Israeli-Palestinian conflict.  The goals of the BDS movement are, “1) Ending [Israel’s] occupation and colonization of all Arab lands and dismantling the Wall, 2) Recognizing the fundamental rights of the Arab-Palestinian citizens of Israel to full equality, and 3) Respecting, protecting and promoting the rights of Palestinian refugees to return to their homes and properties as stipulated in UN resolution 194.”  Each point lines up nicely with Canada’s own positions as documented on the government’s Global Affairs Website.

Woodley admitted that he had been pretty active in promoting BDS, given his role as head of CJPME.  He listed activities such as providing sample protest letters and factsheets for BDS adherents, as well as Web pages establishing the “moral and legal justification of the BDS movement” as irrefutable evidence that he had been promoting the movement. “Even if the Trudeau government doesn’t enforce this motion retroactively,” stressed Woodley, “I’m still on the hook, because we’re fully expecting to continue our BDS activities.” Today, CJPME launched a new petition supporting BDS activists in Canada.

Woodley expressed surprise that the Trudeau government was so ambitious in its plans to condemn “any and all attempts” by “groups or individuals” who promote BDS.  Woodley admitted that with Trudeau’s election promise of “Real change now,” he had not expected a continuation of Harper’s “Israel, right or wrong” stance.  However, Woodley tried to put a positive spin on the Trudeau government’s support for the motion.  Addressing Trudeau, Woodley wrote, “Hopefully, this motion is a reflection of your own attention to detail and your ambition to tackle big tasks.”