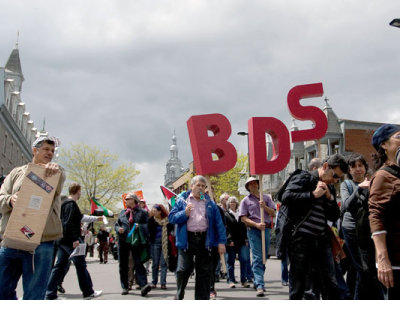 Montreal, May 19, 2016  — Canadians for Justice and Peace in the Middle East (CJPME) denounces Ontario Bill 202 as an affront to free speech in Ontario.  CJPME points out that Bill 202 both attacks Canadians’ right to express themselves through boycott action, and smears an entire movement of human rights activists by accusing them of anti-Semitism.  Bill 202, the so-called “Standing Up Against Anti-Semitism in Ontario Act,” would prevent entities from entering into contract with provincial institutions if these entities support the “BDS” human rights movement based in Israel-Palestine.  BDS stands for “Boycott, Divestment and Sanctions” and is a movement to put economic pressure on Israel so that it respects the human rights of Palestinians in Israel, the West Bank, and Gaza.

“Bill 202 is offensive in the way it attacks freedom of expression in Ontario, and the disinformation it creates about the BDS movement overall,” asserts Thomas Woodley, President of CJPME.  CJPME reminds Ontarians that the goals of the BDS movement are, literally, “1) Ending [Israel’s] occupation and colonization of all Arab lands and dismantling [Israel’s] Wall, 2) Recognizing the fundamental rights of the Arab-Palestinian citizens of Israel to full equality, and 3) Respecting, protecting and promoting the rights of Palestinian refugees to return to their homes and properties as stipulated in UN resolution 194.” [1]  Each point lines up almost perfectly with Canada’s own foreign affairs positions on the Israel-Palestine as documented on the government’s Global Affairs Website. [2] [3]

CJPME also argues that Bill 202 intentionally sows disinformation about the BDS by making the numerous false and libellous assertions.  For example:

CJPME points out how Bill 202 could muzzle Canadians’ Charter right to free expression by, for example, preventing groups advocating BDS from renting rooms or auditoriums on university campuses.  Bill 202 would also penalize and potentially prevent companies from taking a principled trade stand vis-à-vis Israeli human rights abuses.  CJPME points out that Alex Neve, Secretary General of Amnesty International Canada, condemned a February motion in Canada’s Federal parliament which called for the condemnation of BDS activists.[4]    Bill 202 is a private member’s bill sponsored by Ontario Liberal Mike Colle and Conservative Tim Hudak, and is expected to go to second reading today.