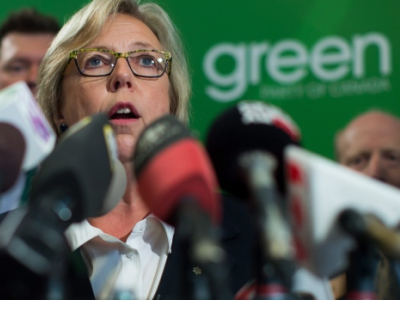 Montreal, August 8, 2016  — Canadians for Justice and Peace in the Middle East (CJPME) enthusiastically applauds the Green Party’s decision to support the international Boycott, Divestment and Sanctions (BDS) movement.  “By voting overwhelmingly in support of this BDS resolution, Green Party members demonstrate their deep concern for the human rights of indigenous Palestinians,” asserted Thomas Woodley, president of CJPME.  BDS is a movement applying economic pressure on Israel until it respects the human rights of Palestinians in Israel, the West Bank, and Gaza.

The BDS motion had wide support at the Green Party convention over the weekend.  During the debate on the motion, members speaking in support of the BDS motion outnumbered the opponents by approximately 10-to-1.  When the vote was taken, the resolution was so overwhelming approved that the chair did not even find it necessary to count the votes.  “We are thrilled at the support for the resolution,” enthused Woodley.  “This Green Party decision reflects the growing base of public support for the BDS movement and Palestinian human rights.”

The BDS movement is aligned both with international law and existing Canadian policy on the Israeli-Palestinian conflict.  The goals of the BDS movement are, literally, “1) Ending [Israel’s] occupation and colonization of all Arab lands and dismantling [Israel’s] Wall, 2) Recognizing the fundamental rights of the Arab-Palestinian citizens of Israel to full equality, and 3) Respecting, protecting and promoting the rights of Palestinian refugees to return to their homes and properties as stipulated in UN resolution 194.” [1]  CJPME observers at the Convention distributed a flyer to Green Party members which cited the international law and Canadian policy which support the demands of the movement. [2] [3]

CJPME has observed that opponents of the BDS movement try to smear it with false accusations of anti-Semitism.  Despite this misinformation, however, CJPME believes that more and more Canadians understand the human rights abuses suffered by the Palestinians as a result of Israeli government policy.  CJPME has compiled a list of Canadian church denominations, unions, and other organizations which are increasingly signing on in support of the movement.  “The BDS movement will inexorably succeed in addressing the injustices suffered by the Palestinians,” asserts Woodley.  “BDS will soon become a national debate involving not only the Green Party, but all Canadian political parties.”