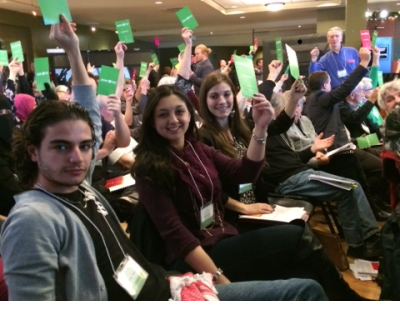 Montreal, Dec. 5, 2016  — Over the weekend, at a federal Green Party Special General Meeting (SGM), Green members voted 84% in favour of economic sanctions on Israel because of its violations of Palestinian human rights.  “This is a landmark decision in Canadian politics,” declared Thomas Woodley, President of Canadians for Justice and Peace in the Middle East.  “This vote reflects Canadians’ anger about the West’s failure to bring peace in Israel-Palestine, and a desire to see an end to Israel’s human rights abuses.”  While the new resolution does not specifically cite the Boycott, Divestment and Sanctions movement (BDS), its precepts align perfectly with those of BDS, including calls for boycotts, divestment and sanctions.

Israeleconomic measures such as government sanctions, consumer boycotts, institutional divestment, economic sanctions and arms embargoes.”  The resolution also calls for Israel to respect the intent of UN Resolution 194 relating to the rights and compensation of Palestinian refugees who lost their homes in 1948 and subsequent years as a result of Israeli policy.  Also like BDS, the resolution calls for equal political and civil rights for Palestinian citizens of Israel.

To some degree, the weekend’s SGM was the result of a BDS resolution which had been approved at a Green Party (GPC) general meeting in August.  Party leader Elizabeth May expressed discomfort with that BDS resolution in August, and this past weekend’s meeting had been seen by many as an attempt by May to distance herself and the party from BDS.  In fact, the resolution that passed on Saturday was considered by many Greens to be a “compromise” resolution: a resolution that calls for everything that BDS calls for, but does not specifically mention BDS.  The BDS movement – standing for Boycott, Divestment and Sanctions – seeks to pressure Israel economically until it respects the rights of Palestinians.

CJPME points out that many Canadians have grown impatient with Canadian parties which proclaim support for a negotiated two-state solution in Israel-Palestine, but ignore both the fact that no negotiations are taking place, and the fact that Palestinians suffer terribly under the status quo.  “This is an important step for those who seek a just peace in Israel-Palestine,” concluded Woodley.  “It will not be surprising to see similar resolutions in other Canadian parties in the coming years.”