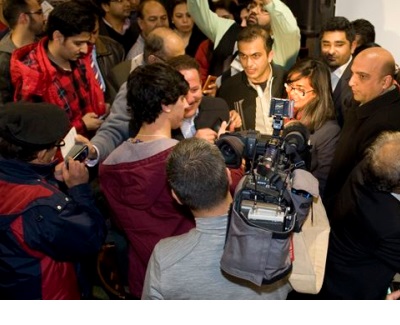 Montreal, February 17, 2017 — Canadians for Justice and Peace in the Middle East (CJPME) urges Canadian MPs to support the motion M-103 condemning Islamophobia. This motion, put forward by the liberal MP Iqra Khalid, calls on the “government to condemn Islamophobia and all forms of systemic racism and religious discrimination.”  The motion also recommends the creation of a committee to study how to combat Islamophobia and other forms of systemic racism and religious discrimination.  It also calls on the committee to gather hate crime data, and assess the needs for impacted communities.

“We are glad to see the Liberal government take a strong position in support of this motion,” declared Thomas Woodley, president of CJPME. “The Quebec City shooting simply confirmed how widespread and insidious Islamophobia is in our society.  We call on MPs of all political stripes to express support for one of the must vulnerable minorities in Canada today,” added Woodley.  CJPME was highly supportive of an anti-Islamophobia motion which passed almost unnoticed this past fall.  Following the Quebec City shooting, motion M-103 goes beyond the largely symbolic motion from 2016.

CJPME has been disappointed with the response of some MPs, some of whom have misrepresented both the literal intent of the motion, and some of whom have suggested that the motion will somehow impact freedom of expression in Canada.  In addition to being only a motion, CJPME points out that M-103 extends concern to people of all religious backgrounds – not just Muslims.  “Following a tragedy like the Quebec City killings, it is indeed appropriate for Canada as a country to reflect on what it can do to ensure the wellbeing and safety of Muslim-Canadians,” asserted Woodley.

While available statistics do not indicated that Canadian Muslims are the most vulnerable group, there has nevertheless been a recent spike in hate crimes against Muslim-Canadians.  The sponsor of the motion, Iqra Khalid, has reported that she alone has received thousands of hate messages because of her role in sponsoring the motion. CJPME also calls attention to a National Council of Canadian Muslims report that crimes against Muslims have almost tripled from 2014 to 2015, and  qualifying Canada being in a “ramp-up phase” of these forms of crimes.