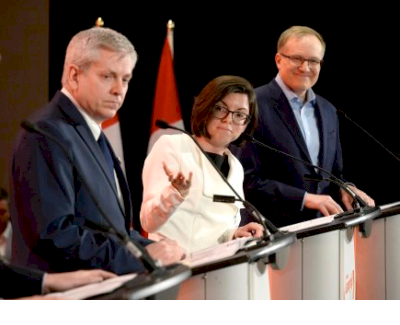 Montreal, August 2, 2017  — Canadians for Justice and Peace in the Middle East (CJPME) has conducted a comprehensive analysis of the Middle East positions of each of the candidates for the NDP leadership race, with Niki Ashton receiving the best score with an A+ rating. Jagmeet Singh was next with an A-, followed by Guy Caron at B+, and Charlie Angus with a B.  In developing this analysis, CJPME used the candidates' responses to a questionnaire issued by CJPME and Independent Jewish Voices Canada (IJV) as well as  quotes and references in the media, comments the NDP leadership debates, comments from parliamentary debate, press statements, the candidates' campaign Websites, and more.

CJPME’s analysis looked at a number of different issues, including Canada's relationships and arms trade with the Middle East, perspectives on the Israel-Palestine conflict, attitudes on the boycott, divestment and sanctions movement (BDS), Islamophobia, and other issues.  Based on its analysis, CJPME has concluded that – in terms of their commitment to a constructive approach to the Middle East by Canada – the candidates rank as follows:

Of all the candidates, CJPME determined that Niki Ashton has been the most forthright of the candidates in speaking out for a principled approach to the Middle East.  Singh is familiar with the dynamics of the Middle East, and has frequently taken principled stances on topics related to the region, but is more cautious with his Middle East policy.  Caron has taken clear and progressive positions on the Middle East, but his campaign overall has not sought to distinguish itself on foreign policy.  Angus' positions on Middle East issues are generally encouraging, but are at times unclear.  CJPME President Thomas Woodley concluded, “While all of the candidates are solidly progressive, Ashton would clearly provide more vocal and effective leadership for Canada on Middle East issues."

CJPME regularly provides evaluations of candidates during party leadership races, and during general elections.  CJPME understands that Middle East-related issues are not the only concerns of NDP members, but hopes to highlight the ways in which the leadership candidates distinguish themselves on Middle East policy. CJPME encourages Canadians who share the NDP values to get involved in the process of choosing the next NDP leader.  The deadline for people to become members and vote in the race is August 17.