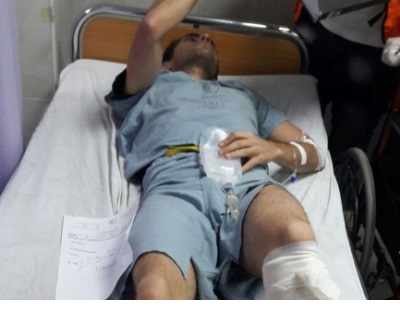 Montreal, May 15, 2018 —Canadians for Justice and Peace in the Middle East (CJPME) condemns Israel’s shooting of London, ON based doctor Tarek Loubani, shot while attending the wounded in Gaza.  Despite being clearly identified as a first responder, Loubani sustained a moderate injury to his left leg, and a minor injury to his right leg.  A friend and colleague of Loubani’s, paramedic Musa Abuhassanin was killed, along with at least 54 other Palestinians in Gaza yesterday.

Loubani makes regular medical missions to Gaza, and was trying to provide medical treatment to Palestinian protesters injured by Israeli snipers.  Monday was the bloodiest day yet of a weeks-long protest in Gaza where Palestinians seek to call international attention to the “Nakba”:  the dispossession and loss suffered by Palestinians as a result of the UN Partition Plan of 1947.  International condemnation of Israel’s violent response to the protest grew yesterday, as UN human rights chief, Zeid Ra’ad al-Hussein condemned the “shocking killing of dozens” by Israel, and the EU called on Israel to respect the principle of proportionality.

The Trudeau government’s response was muted, with foreign affairs minister Chrystia Freeland refusing to call out Israel on its bloody response to what is a passionate, but manifestly peaceful protest. However, NDP Leader Jagmeet Singh asserted, “The use of live ammunition against protestors and resulting deaths are clear violations of international law and human rights.”  He also called for an independent investigation of the Palestinian deaths.

“We demand that our government condemn the shooting of Loubani, if not the killing of the 55 other Palestinians,” declared Thomas Woodley, President of CJPME.  “While the shooting of Palestinians civilians is unlawful, the shooting of medical personnel is even more egregious,” continued Woodley.  Many pundits pointed out the incongruity between the killings in Gaza, and the nearby fanfare of the inauguration of the new US embassy in Jerusalem.  Current events suggest that CJPME was correct in disagreeing with US president Trump’s assertion that the move of the embassy was a step toward peace.